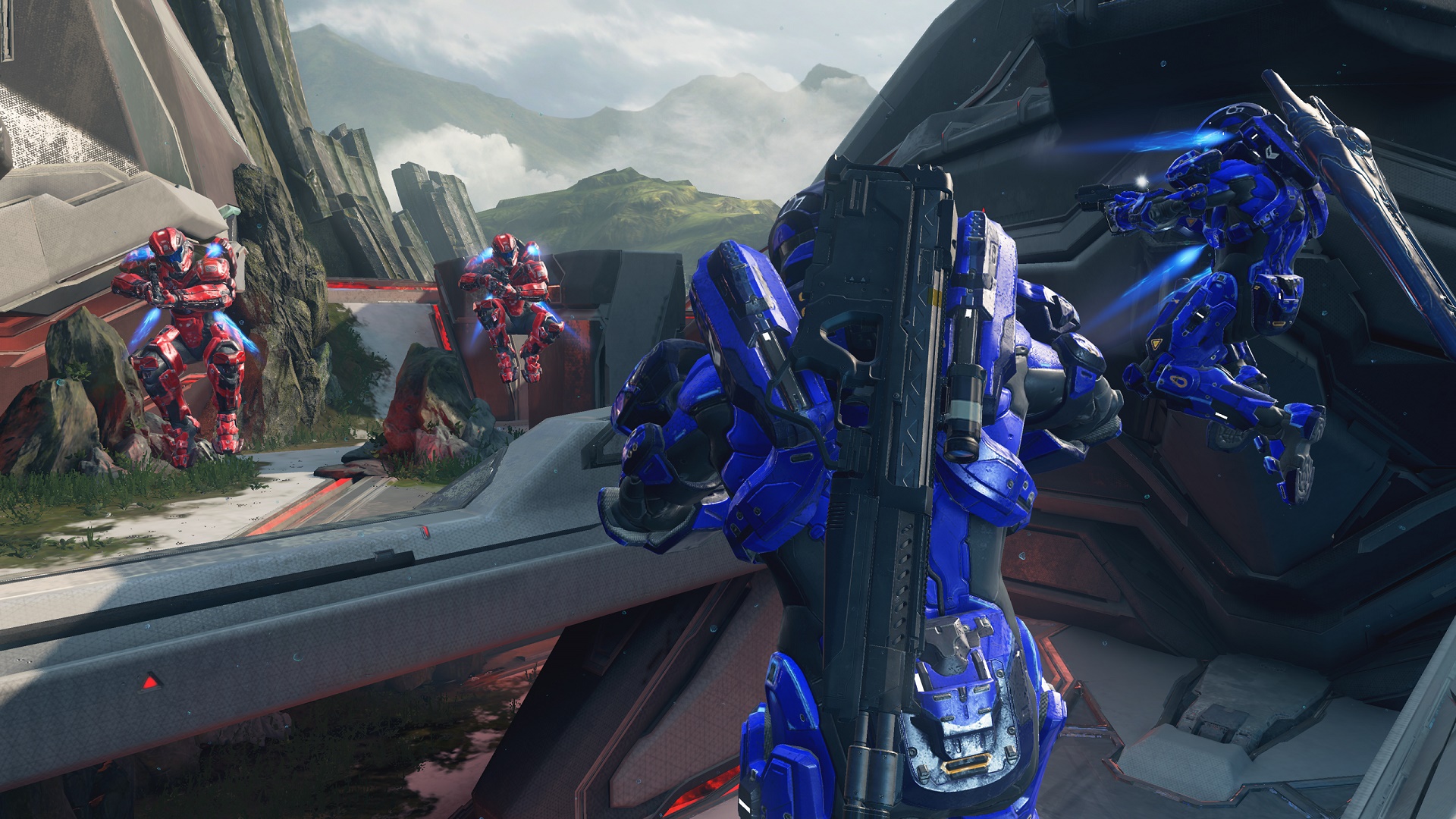 After nearly a day of playing Halo 5 Arena, I am now ready to give my overall opinion on Halo 5 Arena mode.

Starting Weapons Lets first start off with the two starting weapons for Halo 5 Arena: the pistol and AR. Many fans were frustrated when they found out that these two weapons would be taking the place of the BR as the starting weapons. Many found it very hard to adapt to a single shot burst like in Halo: Reach and found it difficult to accurately hit all their shots due to the fast pace of Halo 5. Personally, I feel the pistol works very well in all Arena maps. This is mostly because of the fact that every Arena map is very large with open areas, making players visible in combat for a very long time. With the pistol being the starting weapon, it forces the player to take their time and pace their shots, rather than spamming the right trigger like in other games. The pistol is also very accurate when used properly, so you would have no problems adapting to this change if your shot is actually good. Since the pistol is relatively harder to use than the BR in H5, each gunfight is so much more entertaining. As for the AR, it just feels useless in Arena unless you’re in close range, but since that doesn’t happen very often in H5, the AR becomes more of a burden to carry with you since you need to switch your weapon to pick up a new one. I would much rather have just a pistol and be able to pick up a new weapon as a secondary. Arena Playlist

In Halo 5, 343 has decided to take competitive Halo much more seriously with the Arena game modes. When you look at the Halo 5 Multiplayer section, you notice that it is split into four sections: Arena, Warzone, Custom Game, and Theater. The Arena section consists of 5 game modes: Team Arena, Slayer, Breakout, Free for All, and SWAT. All five of these game modes use the same starting weapons and power weapons. The game modes also have their own ranks, which makes each rank you obtain much more meaningful. Overall, the playlist offers a lot of variety, which suits almost every competitive player. The ranks are also very diverse, with leagues being added to them over time. Player Movement

As many of you have noticed, Halo 5’s player movement is very different from past games, the player shield functions differently, and there are new mechanics. These mechanics consist of Clambering, Spartan Charge, Smart Link, and Ground Pound. Clambering gives the player the ability to climb up an obstacle that wouldn’t be possible with just jumping. It allows players to get to destinations much faster, but makes them very vulnerable in the air. Overall, I didn’t really enjoy this feature because I didn’t find much of a need for it. Although there are certain areas in maps where I need to use it, it honestly didn’t give me much of an advantage and just made me take several bullets while I was trying to use it. Spartan Charge is the equivalent of using melee, but instead you’re using your thruster pack to get to your opponent. So far I haven’t noticed this feature speeding up the melee time, which is great. Smart Link is an optional feature for players that allows you to levitate in the air while jumping and zooming at the same time. During the beta I hated this feature, but now that I am playing several different maps, I am noticing its usefulness in certain situations. Ground Pound is a new feature that allows players to stand still in the air for a short amount of time and slam a player who is on the ground with the power of the thruster. So far I haven’t used it much in Arena but I have enjoyed using it in Warzone. Overall I don’t really see much of a place for it in Arena since it takes so much time to set up for and is pretty useless to use if your opponent is full shields. Overall, I enjoy most of the player movement in the game but I find that several features either make the game feel very weird, or they just don’t work with Arena at all. Maps

Although I find many of the maps in Arena to not look appealing, the raw gameplay feels very good on most. Every map is open enough to allow the player to move around but not enough to where it takes forever to get from one destination to another. There are several setup positions on the maps that take teamwork to overtake, but not many entryways, making it clear what players need to protect. Overall, I have enjoyed almost all of the maps in Arena. Overall Opinion Before I played Halo 5 Arena, I was a bit skeptical. Would 343 be able to deliver us a good competitive experience? But after playing it, I can say that I am satisfied. Almost everything in Arena is suited for the team player and not the starter, which forces teams to play much more cohesively as a unit rather than just trying to get kills. So far, Arena is looking great and I hope 343 continues to deliver us great competitive experiences in the future. What do you think about Halo 5 Arena? Are you enjoying the new approach 343 has taken on competitive Halo? Let me know in the comments section below.