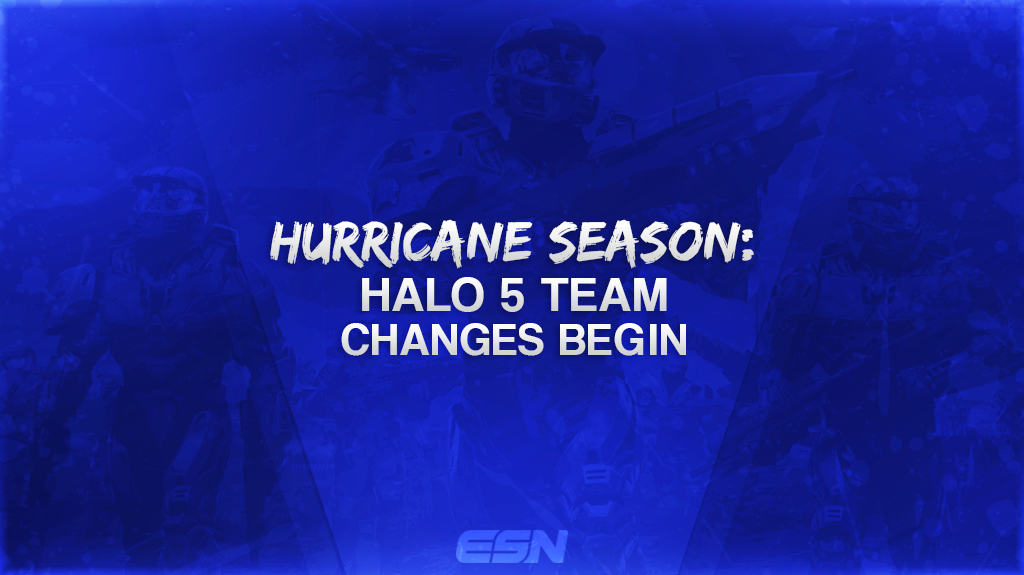 Following the conclusion of Season 2 of the Halo Championship Series and the announcement of the Halo World Championship (and its accompanying $1,000,000+ prize pool), the hurricane of team changes has begun. Teams have slowly but surely been making the necessary alterations to their rosters to ensure that they have the best chance possible at securing big money in Halo 5: Guardians .

The disbandment of Denial eSports kicked off the storm. Last month, Bradley “APG” Laws and Richard “Heinz” Heinz announced that they would be parting ways with their Season 2 teammates, Austin “Mikwen” McCleary and Kyle “Chig” Lawson, but would remain together as a team of two moving forward.

Shortly afterwards, Denial eSports released all four players but announced that they will be looking for another Halo team to represent in the upcoming season.

The Winterfox roster was next to dissolve starting with the exit of Dillon “Randa” Randa, who made his first competitive appearance at UGC St. Louis 2015 before securing a position on Winterfox for Season 2. Randa quickly formed a new team comprised of himself, eXcellence’s Bradley “iTz So Frosty” Bergstrom and Kevin “UnLegit” Smith, and Noble eSports’ Ayden “Suspector” Hill. The team was immediately picked up by Team eLevate .

Team Liquid followed suit with a dramatic change to their line up. Retaining only Tyler “Ninja” Blevins from the original roster, the org picked up Mikwen, Chig and, surprisingly, Aaron “Ace” Elam. Ace had been a part of OpTic Gaming for the entire first and second season of the HCS, and had previously teamed with Michael “Flamesword” Chaves and Clete “Assault” LoRusso on Status Quo for the entirety of 2010 and 2011. Ace will also be joining his brother and former pro, Kyle “Elamite” Elam.

After the unexpected drop from Liquid, both Ryan “Shooter” Sondhi and Tyler “Spartan” Ganza rebounded quickly; together they were absorbed by the remaining members of Winterfox, Jacob “Arkanum” Santos and Ryan “Ryanoob” Geddes. Mason “Aries” Miller, the final former member of Liquid, is currently a free agent.

Earlier this month, Cloud9 announced the departure of Justin “iGotUrPistola” Deese. After a hand injury forced him onto the sidelines for Season 1, Pistola’s return was the wildcard following Season 1 and really set the pace for team changes. Pistola has already moved on; however, as it was revealed recently that he will now be forming a team of three with APG and Heinz. Similarly, speculation over the return of Matthew “FormaL” Piper has been whirling around the community with most people placing their bets on him competing under OpTic Nation with Heinz, APG and Pistola, all of whom formerly teamed together on Ambush.

So far, only two of the top-eight teams from HCS Season 2 Finals have not made any changes to their rosters: the god squad Evil Geniuses, and Counter Logic Gaming. EG hasn’t made a team change since their Season 1 farewell to Pistola which resulted in the addition of Tony “Lethul” Campbell. Since then, they’ve won the last five HCS LAN events including both Season 1 and Season 2 Finals and any change to the line up seems unlikely. CLG has also made only one change since the beginning of the HCS. Following Season 1 Finals, they opted to pick up Scottie “Cloud” Holste in place of Heinz with the hopes of picking up an extra edge to take down EG. While they were unsuccessful, they still managed to maintain their second place positioning at Season 2 Finals.

With over a month until the release of Halo 5 and no set date for the Halo World Championship or any HCS sanctioned events, teams still have plenty of time to make changes. While orgs such as Winterfox and Team Liquid seem to have cemented their new lineups, others such as OpTic Gaming and Cloud9 haven’t seen significant advances in completing their squad. But a new Halo means new abilities to master (i.e. clamor, thrust), and, at this point, it’s impossible to tell just yet which team will come out on top.

Don’t miss out on any of the team changes. Follow @ESNHalo on Twitter to stay updated with all the latest Halo news and roster changes still to come.