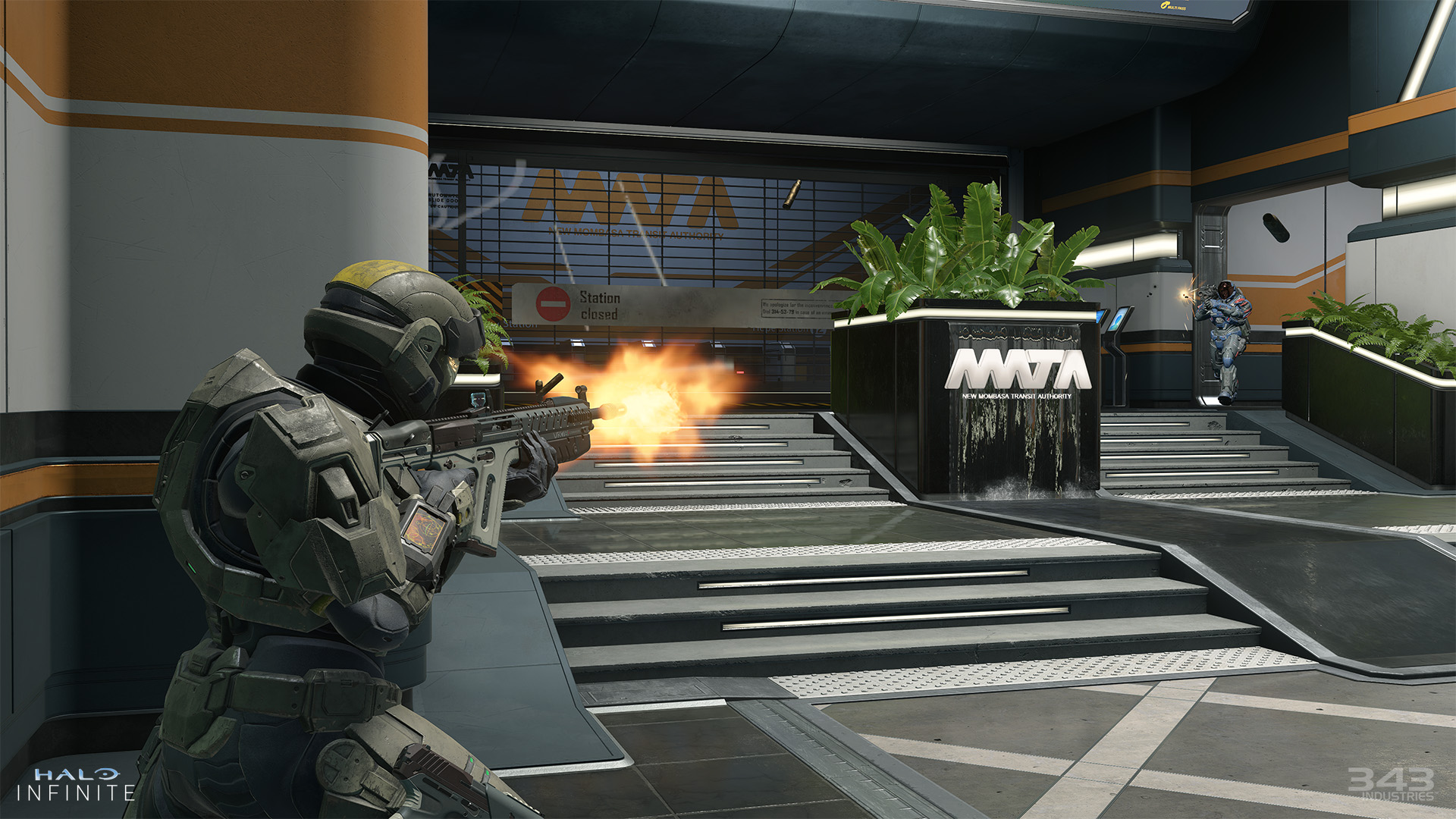 Streets is a popular map in Halo Infinite for good reason. This three-lane map gives teams a fair shot at each power weapon, and navigating the map is simple. Players will experience Slayer, Oddball, and Strongholds on Streets in the ranked playlist, meaning they’ll likely encounter this map at least once per play session.

Learning where each power weapon spawns will come naturally with practice and knowing the fastest way between objectives will eventually become second nature. This Halo Infinite Streets guide should help you get started with the map.

The Subway area is home to C Flag in Strongholds, a spot players will encounter in almost every game on Streets. This is also the spawn location for one of the teams and a popular position to hold the ball in Oddball.

After spawning in Subway, players have a few ways to move around the map. They can exit through the Subway Stairs or Arc Street exit to traverse the outside lanes or push out the front door to fight in the middle lane. But remember, the enemy team spawns directly across the map and will likely peak this angle.

The front entrance of Subway leads to the Plaza, which serves as a buffer between the building and Main Street. This area is overlooked by the Subways Balcony, where the Stalker Rifle spawns. The Subway Balcony is an excellent position to cover this side of the map as it covers all entrances into the Subway area and the Old Town Bar.

The entire Subway area is an excellent location to control in several modes. As mentioned previously, players can defend the Oddball carrier in this location if they successfully control all entrances. This is also a great spot to cover the Rocket Launcher spawn in Main Street to prevent the enemy from holding one of the most crucial power weapons.

Main Street is the direct lane between both spawn areas and a crucial part of the map. The Rocket Launcher or Cindershot spawns in the middle of this area, and the Oddball spawns in the Main Street Alley. Moving through this lane can be dangerous, especially if the enemy team holds one of the elevated positions on either side.

But there are a few ways to move through the area quickly. Players can jump into Old Town Alley from Main Street to promptly escape danger or rotate toward the B Flag. There is also an entrance into the Commerical District on the opposite side of Main Street, meaning players can easily move to either side of the map. Both openings also serve as an excellent view into the opposite lane, and players can monitor enemy movement or even kill crossing opponents.

Station Square is the other spawn area on Streets on the opposite side of the map from Subway. This area is connected to Main Street, Old, Town, and Commerical District, and is also the home of the A Flag in Strongholds.

Station Square is overlooked by the Station Tower, an elevated position similar to the Subway Balcony. On the opposite side of Station Square is Station Inside, an interior area that also connects to Old Town. This is a popular area for players to hold down in Oddball, as breaking a defense in the building can be challenging.

The A Flag is located on the second floor of the Station Tower and can be slightly difficult to hold as a home flag. This area is close to the Commerical District, and sneaky players can easily tiptoe into the area if a team is focused on Main Street or the B Flag. Just remember that tracking enemy movement through this part of the map is important and can help you control enemy spawns.

Old Town, also commonly referred to as B Street, is one of the most important areas of the map. The B Flag is located in the Old Town Bar, which is in the middle of the lane. The Plaza Stairs and Old Town Alley also connect to Main Street, meaning this lane is a high-traffic area in almost any game mode.

The Commerical District is on the other side of the map from Old Town and connects both spawn areas. This lane is where the CQS48 Bulldog spawns, which is a weapon a team should try and control at all times. This lane is also slightly shorter than Old Town, making it easier to rotate through this area.

Power weapons are important on every Halo Infinite map, but even more so on Streets. The Rocket Launcher can change the pace of an entire match if used correctly, and monitoring Main Street when it spawns is important. Also, the Bulldog should be in your team’s position as it can devastate enemies in the various close-quarter buildings around the map.

Slayer is also one of the game modes on Streets in the ranked playlist, and grabbing each power weapon can help your team secure easy kills. Remember the various alleyways and shortcuts around the map to help you move around without being stuck in an open area.