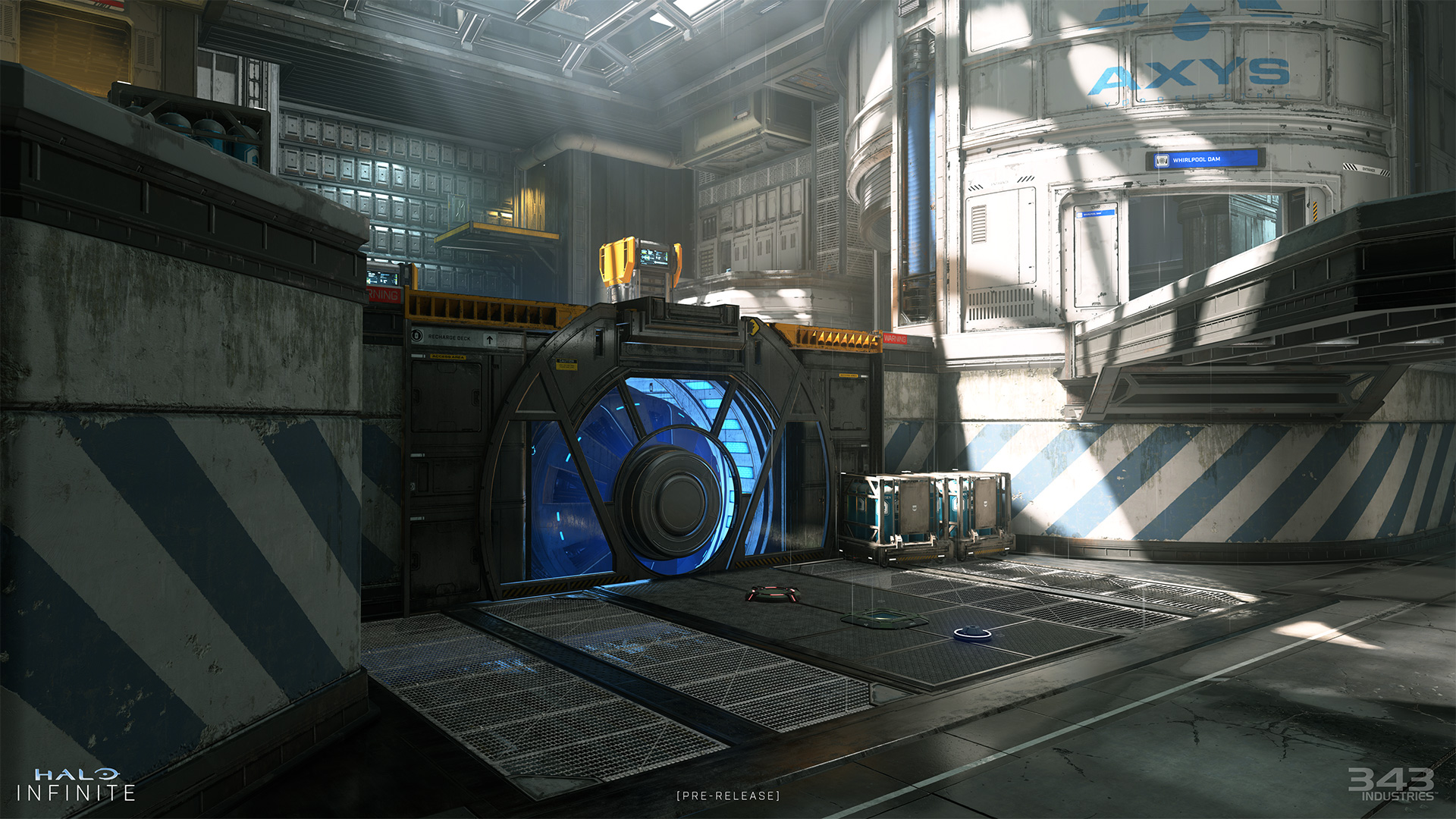 Halo Infinite’s Recharge map is a fun, fast-paced map that is featured in almost every playlist. Ranked players will play Slayer, Oddball, and Strongholds on Recharge, meaning they’ll have to adapt to almost all ranked game modes on this battlefield.

The key to winning on Recharge is the same as any other map: Control the power weapons and engage enemies as a team to win. Knowing the best spots around the map also helps, so use this guide as a resource before diving into your next match.

Hydro is home to the C Flag in Strongholds and one of the spawn points. Players that spawn here have almost immediate access to the Energy Sword or Gravity Hammer, which are deadly on this close-quarters map. Combining these items with the Grappleshot can devastate enemies with ease.

The Hydro area is one of the most popular spots on the map in multiple game modes. Teams will often hold the Oddball near the Energy Sword spawn since it is secluded and easy to protect. Players can also throw the Oddball off the map to reset it if the enemy team breaks through the defensive line.

A Flag and C Flag are also relatively close, and controlling these two flags is a viable strategy in Strongholds. It’s crucial to hold at least one of the home flags, since only controlling the B Flag will spawn you in the center of the map. This puts you at a disadvantage because it is much easier to defend either home flag.

Long Hall, also known as C Hallway, connects the Hydro and Platform areas to the center area of the map. This narrow path has access to Sneaky, Attic, and Batteries, making it a popular route. Keeping track of enemy movement through this area is crucial, but players can easily watch the entrances on either side from other areas.

Players sitting in Attic can easily watch Long Hall, but players have a decent amount of cover to use as they traverse the path. The Disruptor also spawns in Long Hall, but this is a relatively weak weapon that should only serve as a backup option.

Batteries serves as the upper center portion of the map and is the home of multiple objectives. The Oddball spawns in this spot, and the B Flag covers the majority of the area. Players will often fight in this area, but this is often dangerous as it is exposed to several other parts of the map.

The Shock Rifle or Hydra spawns in the upper-left corner of Batteries, and an opening in the top-right leads to Orange Pipes. The four batteries constantly raise and lower, meaning the available cover changes. These moving objects also allow players to easily reach the elevated areas, although jumping in the open can be dangerous.

Staying in this area for long is not recommended as enemies can pick you off from several angles. This also means you can cover Batteries from several other spots, allowing you to cover objectives from a distance.

Pit is the large open area beneath Batteries and is where Active Camo spawns. Almost every match starts with a skirmish in Pit as each team fights for control of the powerful piece of equipment. Platform and Elevator connect to Pit, meaning players can potentially cross the map in this low area. But its almost as exposed as Batteries, so be careful when moving around this area.

Players can use a box to jump up to Batteries from Pit, which is a popular tactic after grabbing Active Camo. Sliding into Pit is also an excellent way to escape danger, but think twice before using this tactic. Moving too close to either side of the map can disrupt the spawn points and potentially put your team in a challenging situation.

Orange Pipes and Maintenace Bay form a long hallway running behind Batteries, connecting Whirlpool Dam and Long Hall. This is a popular spot in several modes as it provides access to Attic and is easy to defend.

If you’ve played Oddball on Recharge, you’ve likely encountered a team camping in this area. The two entrances on either side are easy to defend, and the player holding the ball can easily move from one side to the other.

Maintenance Bay is also the interior portion of Attic and is a great spot to cover most of the map. Picking off or damaging players from this spot is easy, and consistently controlling this spot can help you win Slayer matches.

Whirlpool Dam and Elevator serve as the other spawn area. A Flag is located in the top portion of elevator, and Whirlpool directly connects to Batteries. The elevated position in this area can be used to cover most entrances to Batteries, making it an excellent spot to control.

This is also another popular spot in Oddball, because the ball carrier can hide at the top of Elevator while their team covers the other entrances. A Flag is an easy flag to hold if one consistently remains in this area, but taking it can be difficult. Remember that Pit and Control Room connects to this area on the lower level, and sneaky opponents can flank with ease.

Control Room is a two-story area between the A and C Flags. The second floor looks over Pit and Batteries and has an excellent view of Attic. Players will likely encounter enemies in Control Room consistently throughout a match, especially in Stronghold.

Recharge might feature several large open areas, but close-quarter fights happen more often than you might think. Fighting for either home flag in Strongholds can be stressful, especially if the enemy team has the Energy Sword or Active Camo. Moving through Orange Pipes and Maintenance Room can be impossible if more than one player is holding the area. But remember there are several weapons, like the Needler and Mangler, that can help you win battles with extra firepower.

Also, don’t panic if the enemy team consistently controls B Flag. A viable strategy is holding the A and C Flags as the other team will spawn in the middle of the map and have to fight to take one of the home flags. Running between both spawn areas is easy as long as you control Control Room. Remember this if a team is successfully holding the middle portion of the map.