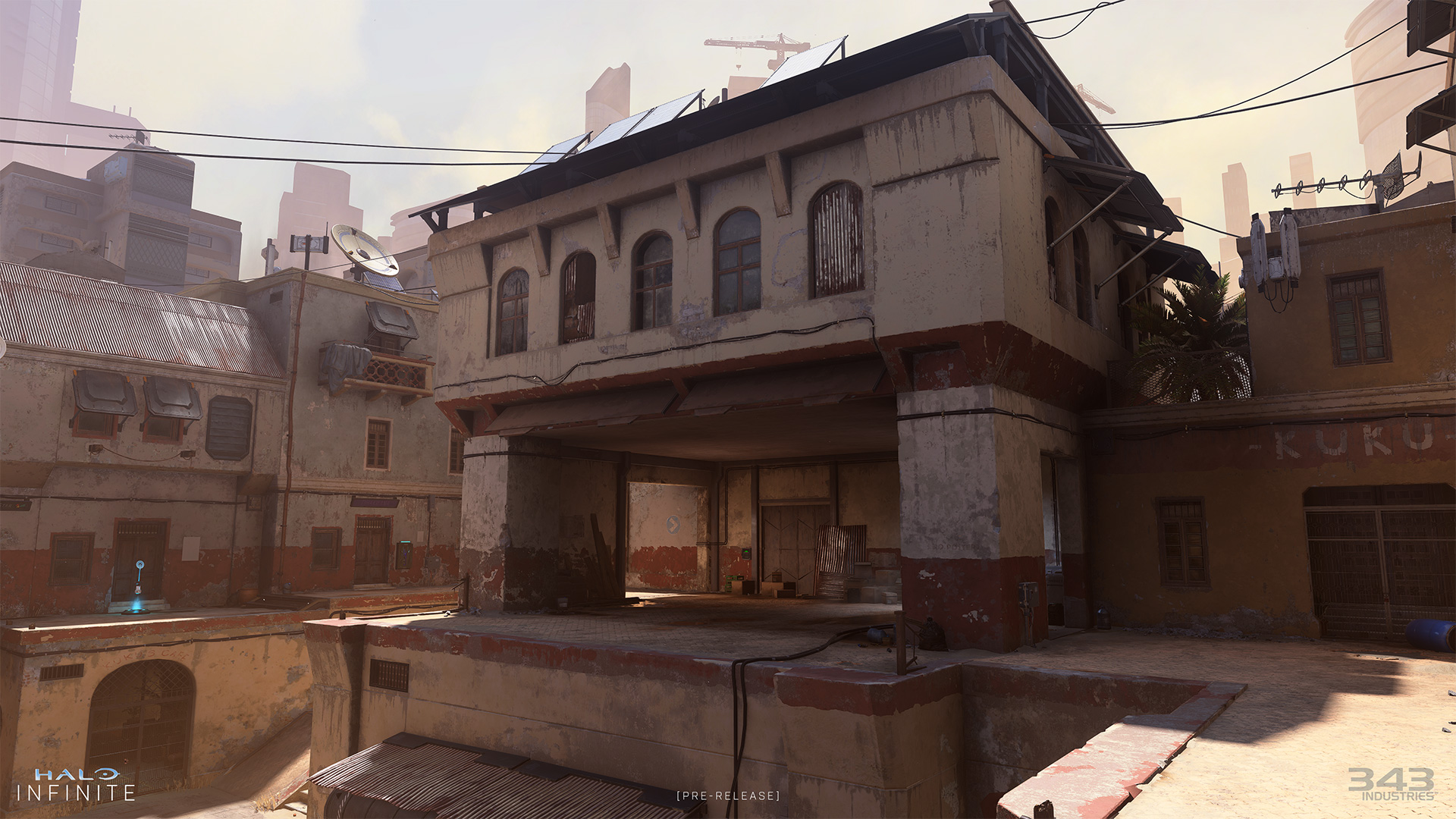 Bazaar is a unique map in Halo Infinite. The center of the map is a wide-open area with multiple elevated positions. Ranked players will experience this map in Capture the Flag and Slayer and will soon learn how difficult it can be to control the center of the map and successfully grab the enemy flag.

Slayer also takes place on this map in the ranked playlist, so learning the weapon and equipment spawns is essential to winning in this mode.

The West Base serves as one of the spawn points on Bazaar and is the location of a flag in Capture the Flag. Players have multiple options when moving towards the center of the map and can choose to take the high or low ground. Palm Tree and Cafe are accessible from this area, and both provide an excellent view over the center of the map.

Players can also wrap around towards Tower through the West Alley or push directly into Market from the West Gate. Every direction features a weapon on the wall, so remember whatever you pass, especially in ranked matches. A secondary weapon can make a significant difference in a gunfight.

Ranked players will experience Slayer and Capture the Flag on Bazaar, and West Base plays a significant part in CTF. Defending this area can be difficult if a team pushes from multiple directions, so the best tactic is to stop them in Market. Make sure to control the significant areas in the middle of the map to avoid fighting for control of this area.

Market is located in the center of Bazaar and is exposed from all sides. Palm Tree, Cafe, Antenna, Den, and Tower are all directly above Market, meaning players will have to check these posts when moving across the map. But a few items spawn in Market that makes it worth venturing into the exposed area.

Overshield and Active Camo spawn near Truck, which is on the opposite side of Market across from Tower. These abilities are game changers, and Overshield can easily turn the tides of a ranked match. Dynamo Grenades and the Grappleshot also spawn in Market, which are always useful to have.

The Tower is also an important area to control since the Cindershot and M41 SPNKR spawn here at the beginning of each round. These items can take out enemies in one or two shots and can help a team secure an early lead. Controlling Market is crucial for winning on Bazaar, so make sure to grab as many of the abilities and weapons in this area as possible to avoid facing an overpowered enemy.

Each team should cover the opposite side of the map from the elevated positions and coordinate an attack for the power weapons and abilities. Players can easily chip away at enemy armor from a distance, but just remember the other team has access to the same positions.

Tower Basement is an isolated area running beneath Tower, connecting the West and East Alleys. This small area is where the Heatwave and CQS48 spawn, which are devastating in close-quarter fights. Tower Basement also offers an alternative route between the two spawn areas, providing a way to flank unsuspecting enemies.

There is a small tunnel on top of Tower leading to the basement, allowing players on both sides to drop down into the lower area. This is also a great way to escape when outnumbered or outgunned or to quickly help teammates below.

Running the flag through Tower Basement provides slightly more protection, but it is also risky. Enemies can stop the flag carrier in this secluded area, making it tough for their teammates to recover the flag. Use this tactic in a pinch or if the entire enemy team is eliminated, but consider other options.