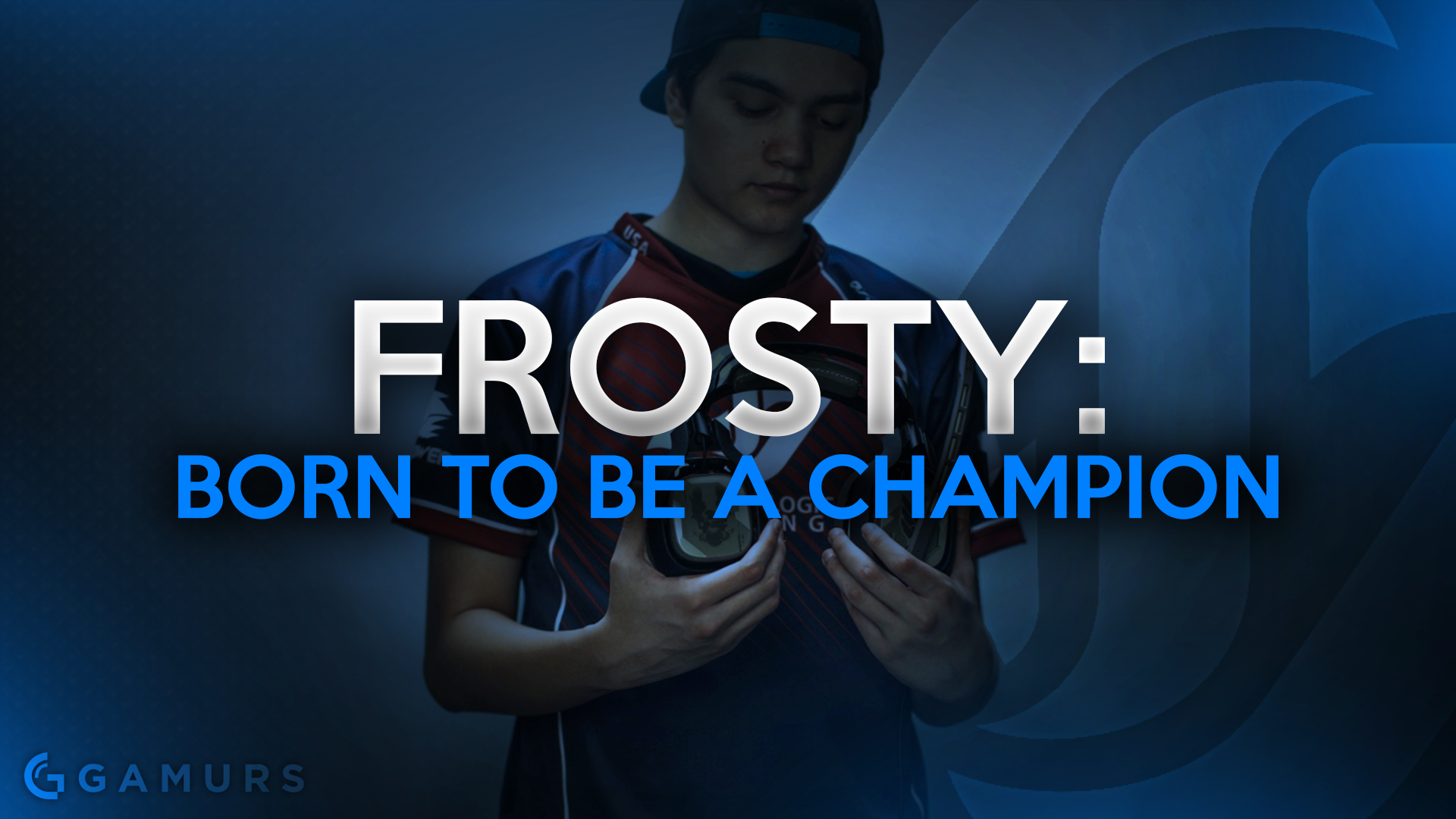 As an amateur player, yourbiggest dream is to become a professional. You invest countlesshours each day into perfecting your craft in the hopes that one dayyou will get paid to do what you love. On this journey, everyplayer faces several obstacles that they need to overcome. A toxicamateur communitty, gaming expenses, improving your skill andimproving your personality are just a few of the many problemsamateur players need to overcome to achieve their goal of goingpro. Bradley “Frosty” Bergstrom is a player who facedall these problems, but after all the chaos, he stands proud asa Halo WorldChampion.

Frosty was always known as aplayer with a great attitude. His likable personality helped himbuild strong relationships with many of the top amateur players whoallowed him to play with them. This helped him improve his skilland progress even faster as a player. By the time Halo 2: Anniversary came around, Frosty was already buildinga serious name for himself as one of the top amateur Halo players.His first H2A event would be UGC Saint Louis 2015 where hewould team withRABIIIIIIIIIIID, KlNG AVALONandntrckpny making a team called Dark Matter. This teamwould not do too amazing, placing 22nd, but many were taking noteon Frosty’s individual performance.

Soon after, Frosty was offeredan opportunity to join Team Reality Check, which consisted ofMichael “Suddoth 1” Suddoth, James“Suddoth 2” Suddoth and Tomell“Very Nerdy” Day. Frosty would join and they woulddo very well placing seventh. This would be Frosty’s firsttop-eight placing in an event, giving him “Pro Player status. “After this event, Frosty’s name would be spread amongstthe entire community as a player with serious potential. A fewmonths later, he was offered a spot on eXcellence Gaming. This teamwould consist of Coby“Coby” Yamauchi, Kevin“UnLegit” Smith and Visal“eL TowN” Mohanan. They did not perform too bad,placing top-12 in HCS Indianapolis 2015 and then placing eighth inthe HCS Season 2 Finals.

With HCS Season 2 endingand Halo 5right around the corner, the futurewas looking very bright for Frosty. He was offered a spot on a teamcalled Daytona which would be competing in Iron Games Daytona 2015,the first ever Halo5 event. With his teamconsisting of APG, Aries andRabiiid,this would be a great opportunity for Frosty to showcase histalents to all the pros before the HWC Season began. This teamperformed very well, taking home the championship, and Frostyin particular performed very well, showing how comfortable he feltwith the new Halo5 mechanics.

With this being his first everevent win, Frosty was excited to see what the future would hold forhim in Halo 5. After Daytona, Frosty was offered a spot on CounterLogic Gaming. Consisting of Tom “Ogre2” Ryan, Paul“SnakeBite” Duarte and Matthew“Royal 2” Fiorante, CLG was looking for a youngplayer with big talent to help mold what could potentially be thenext big star in the scene and they saw just that in Frosty. Withhis great talent and great personality, CLG would be able to teachhim all the strategies and provide him with all the advise Frostyneeded to be great and they were able to do this withease.

With Frosty quickly turning intoa very valuable asset for this team, CLG knew they had a fightingchance to defeat the reigning champions Evil Geniuses. As time wentby and as CLG was able to evaluate their strengths and theirweaknesses, CLG came to the conclusion that legendary player andcaptain of CLG, Ogre 2, was holding them back. They wouldrespectfully release him in the hopes that they would find anothertalented player who fit well with CLG’s play style andmindset. After looking everywhere, they came to the conclusion thattheir rivals EG had the player that they needed, which was TJ“Lethul” Campbell.

With Lethul on board and Frostyonly showing signs of growth, CLG was in perfect position to be thebest. Their first event as a team would be X Games Aspen 2016.Prior to this event, CLG was looking extremely dominate in theOnline Qualifiers, making CLG the favorite to win this event. Theydominated their group play matches and continued their dominance inbracket play, not dropping a single game. Once they reached theFinals, they would face a worn down but determined EG team that hada much harder time in their group play and bracket playmatches.

With CLG looking as the moredominant team, former EG member Lethul was confident during hispregame interview, even willing to talk some trash to the captainof EG Eric “SnipeDown” Wrona. This would wind up being afailed strategy for Lethul as EG would come out on top in what manybelieve to be the closest series in Halo 5 history, with EG winning4-3.

Although CLG lost aheartbreaking series, Frosty was still building his reputation withhis exceptional performance in this event proving that he canhandle the pressure of competing with the best. CLG would not takethis second place finish too seriously as they would move onto the HWC NA Regional Finals of 2016 with the same level ofconfidence. Frosty was determined to win it all and he knew thathis team could do just that. CLG would once again dominate theirgroup play matches only dropping one game against TeameLevate.

Come bracket play, CLG wouldcontinue their dominance once again, even being able to get somesweet revenge against EG in the Semi Finals, defeatingthem 4-0 in the series. In the Grand Finals, CLG would face atalented Denial Team that put up a good fight, but CLG was able tofinish them off 4-2, making them the HWC NA Regional Champions of2016. This event would prove to everyone that CLG was the best teamin North America and it would also prove to everyone that Frostywas a big time player who had the talent to compete at the highestlevel.

Their last event of the seasonwould be the Halo World Championship of 2016. This event wouldsolidify CLG’s position as the best team in the world, makingthis event an important one for them to win. CLG came out gunsblazing in group play once again, only dropping one game toEpsilon. CLG hoped that the same results would come in bracket playand they did as CLG would 4-0 EG in the Quarterfinals, 4-2 Denialin the Semi Finals and 4-0 Allegiance in the Grand Finals, givingCLG the HWC Championship win they so desperately wanted.

This win put CLG at the top ofthe world and made Frosty one of the youngest Halo Champions inhistory at just 18 years old. To even think about all thesuccess Frosty has had recently is unfathomable. Although hissuccess is not impossible to achieve over a long period of time,being this successful this early in his career speaks a lot aboutFrosty’s level of talent and potential as a player. He isstill very young and he still has a lot of time until he is fullydeveloped as a player, so Frosty is most likely only going to getbetter from here.

Frosty’s early successresonates not only on CLG’s ability to give him a chance, butit also resonates on the serious potential a lot of these youngerplayers have. In recent seasons, we have seen a lot of talentedprospects blow up in the scene such as eL Town, Suspector, StelluR,Spartan and many more. They were all given chances by pro teams whocould have easily turned them down, postponing their dreams evenfurther, but their drive to go big propelled them to thetop.

There is no doubt in my mindFrosty was born to be a champion. He has all the credentials atypical champion would have and as he grows as a player, he willonly develop more. I am very excited to watch Frosty continue togrow as a competitor and hopefully the future remains bright forthis young star.

What do you think aboutFrosty’s recent success this early in his career? Let me knowin the comments section below.