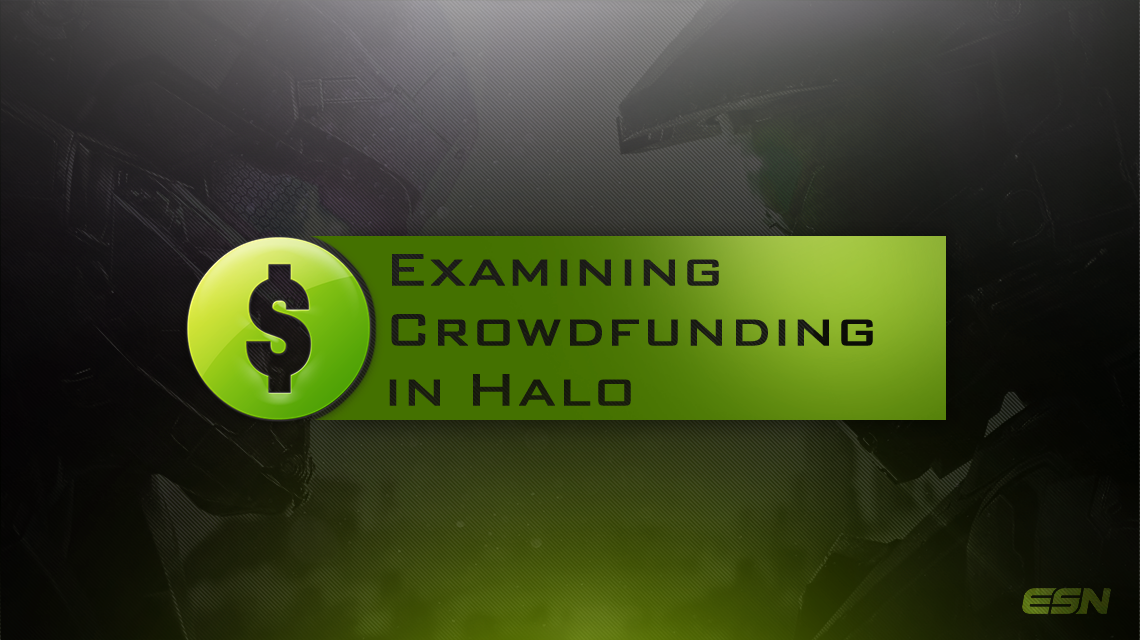 Earlier this year at gamescom 2015 , 343 Industries announced the Halo World Championship , the largest Halo tournament in history. Promising a $1 million base prize pool plus crowdfunding, the event will span from December to March 2016.

Last week, we got a flurry of new information regarding the tournament’s size and scope, but today, we are going to be focusing on the crowdfunding aspect of not just the HWC but the Halo Championship Series as a whole. However, in order to understand how crowdfunding will work in Halo eSports, we need to take a look at how crowdfunding has been implemented in other competitive titles.

Perhaps, the most successful example of this is The International , the annual Dota 2 championship which is organized by Valve Corporation, the developer of Dota 2. Analogous to other major tournaments such as Call of Duty Championships or the League of Legends World Championship, The International is the crown jewel of Dota 2 eSports. Starting in 2013 with The International 3 , Valve decided to mix things up a little by adding crowdfunding. They did this by introducing the “Compendium.” Described by Polygon as “ a sort of virtual ‘program’ offering in-game challenges, fantasy league-style predictions, and in-game cosmetic rewards,” the Compendium allowed for unparalleled fan interactivity during the event and sold for a base price of $9.99, with 25% of Compendium revenue being added to the event’s prize pool and the other 75% entering Valve’s coffers.

To put this in perspective, Lee “Faker” Sang-hyeok of SK Telecom T1, widely considered to be the best League of Legends player ever, has won approximately $478,417 from 25 tournaments according to eSportsEarnings. Peter “ppd” Dager, the captain of Evil Geniuses’ Dota 2 team, took home $1.3 million from the International 5 alone, nearly three times Faker’s career earnings. This astronomical increase in prize pool has not only catapulted  The International 5 into the crown jewel of Dota 2 eSports but to the forefront of competitive gaming tournaments.

So, this brings us back to Halo. With the history and the effects of crowdfunding aside, let’s get into how it will work in Halo.

Halo 5 introduces the Requisition System, the all-new progression and unlock system for the Halo title. We explained the REQ system in detail last month over here , but I’ll give the short of it. Ditching the rank-based unlock system that was used in 2010’s Halo: Reach and 2012’s Halo 4 , the REQ system is built to accommodate the game’s microtransactions, which come in the form of REQ packs. At the moment, there are three purchasable REQ packs – Bronze, Silver, and Gold, of which the latter two can be purchasable with real-world currency (priced at $1.99 and $2.99, respectively). Conversely, players can purchase these very same REQ packs by using in-game REQ points that are earned by completing matches of Warzone and Arena. There’s also a Warzone REQ Bundle that goes for $24.99 which essentially acts as a Season Pass for microtransactions.

For the purposes of our discussion, we are going to focus solely on REQ packs purchased with real-world money. At the time of publishing, the only information that we have about crowdfunding in Halo is that a “yet to be disclosed percentage of REQ revenue” will be directed towards the Halo World Championship’s prize pool. Although this lack of transparency is troubling, it’s probably safe to assume that 343 will be following in the footsteps of Valve in their handling of The International’s crowdfunding, with 25% of REQ pack revenue going to the Halo World Championship’s prize pool.

As was reported widely on the internet as well as here on eSportsNation, last week, 343 revealed that REQ pack revenue added an additional $500,000 to the Halo World Championship, and that was after just one week (which means that 343 probably walked away with $1.5 in microtransaction revenue). Although 343 isn’t giving fans real-time updates on just how much money has been crowdfunded (something that they should do and something that Valve has done with the Compendium), the Halo World Championship prize pool will almost certainly be tripled by crowdfunding, but what about HCS events beyond the World Championship?

After the Halo World Championships, Season Three of the Halo Championship Series will probably begin and, while there is absolutely zero information on how the season will be structured and how many “LAN” events the season will have, crowdfunded prize pools will probably play a role here too. You see, some eagle-eyed fans have noticed the appearance of the “HCS Pack” on the REQ pack database of Halotracker.com. When clicked on, the description of the pack reads, “ Purchase of the HCS Pack will augment HCS tournament prize pools and unlock 5 special HCS visual customization items for use in Arena and Warzone! Subsequent purchases unlock 5 rare or better visual customization items if available.”

If you are wondering why the appearance of such a pack on a fan-created stat-tracking website is significant, it’s due to the fact that Halotracker utilizes Halo 5’s stat-tracking API which was supplied by 343 Industries, a fact that 343 trumpeted up with a blog post on Halo Waypoint.

When I first saw this particular REQ pack, I originally theorized on Twitter that this pack in particular would carry some kind of special crowdfunding attribute for the HWC, such as an increased percentage that goes into the prize pool. That is to say, while the revenue of “standard” REQ packs follows a base percentage (which I’ve already theorized to be 25%), the percentage of HCS pack revenue that goes to the HWC would be significantly higher (perhaps 50% or even 100%). But, if this were to be the case, it begs the question: why isn’t it already on sale?

This leads us to a second theory and one that is probably much closer to 343’s actual plan and the truth.

As was stated earlier, there will be plenty of Halo to be played after the Halo World Championship, and Halo 5 will be with us for at least few years before Halo 6 rolls around. With this in mind, it would be pretty asinine for 343 to completely abandon the whole crowdfunding aspect of the HCS, especially considering that there is a demand for crowdfunding. It’s also extremely unlikely that 343 will continue to divert all of their REQ pack revenue after the Halo World Championship, and this is where the HCS pack comes into play. It would allow 343 to continue to give fans an avenue of directly supporting Halo eSports without hurting their revenue stream from the REQ pack microtransactions.

Either way, the fact that 343 is seemingly planning on continuing the crowdfunding aspect of the REQ system after the Halo World Championship says a lot about their commitment to bringing Halo back to the forefront of competitive gaming, and it would be the first competitive eSport of any kind to introduce perpetual crowdfunding. Regardless if Halo does succeed in resurging, the fact that crowdfunding has been embraced this wholeheartedly by a community of a “dead game” (when compared to the likes of Counter-Strike , League of Legends , and Call of Duty ) is extremely telling and will have major impacts on whether those games come to add crowdfunding to their professional leagues, especially in the cases of the League Championship Series and the newly-organized Call of Duty World League .

What do you think? How much will crowdfunding factor into Halo eSports? Leave your thoughts down below or tweet us at @ESNHalo .