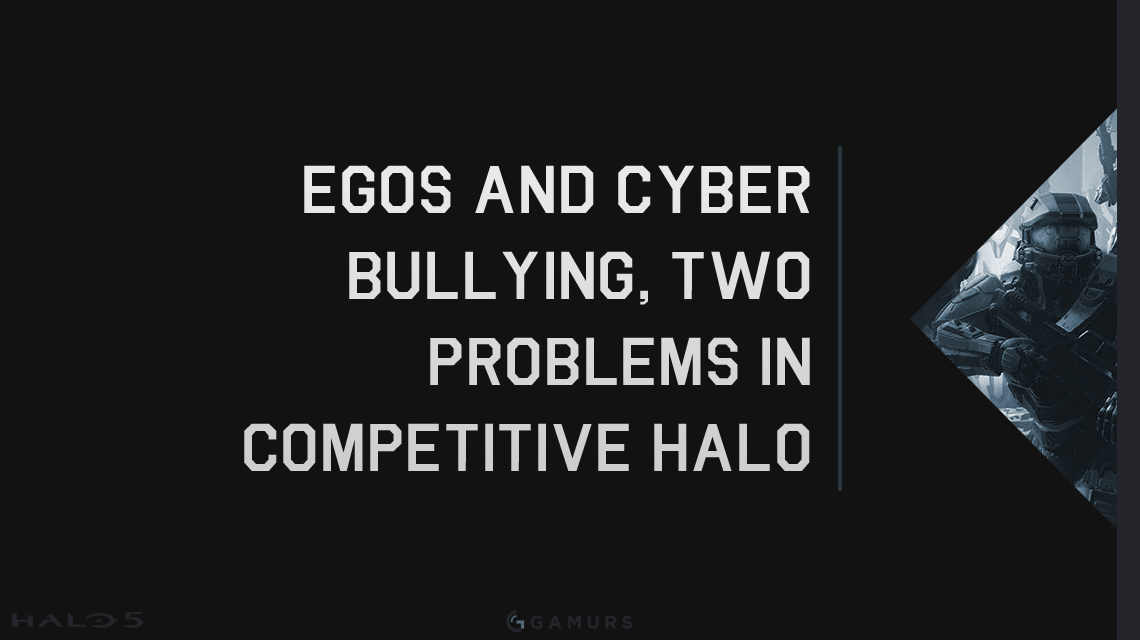 Ever since the competitive Haloscene was born, conflicts between players egos and the eventualcyber bullying became a major negative about our competitive scene.Of course, having strong belief that your team can win and talkinga little trash to get in your opponents’ minds is not a problem,but using racial slurs, sexist remarks, physical threats oranything else that is purposefully meant to hurt someone to me isgoing too far.

As a Halo player who has been apart of the community ever since I was a little boy, I have seenour community change for better and for worse over the years. Oneproblem that I personally believe has become significantlyworse is this egotistical behavior that has infected ourcompetitive community. Amateur competitors have much less of afilter today than in the past and I am seeing players use terms Ipersonally could never forgive myself if I were to usethem.

The lack of respect some havefor individuals for something as simple as playing a video game tome is absolutely mind blowing. As someone who was raised to treatothers with respect, I at many times wonder what has caused theseplayers to act so cruel to others, especially today where leagueslike the HCS Pro League hold such a high standard forprofessionalism and respect.

The biggest problem that Inoticed about this behavior is the individuals who have thisbehavior honestly do not believe they are doing anything wrong.They believe that treating others terribly just because they arebetter than others at a game is completely fine and some actuallybelieve that they are helping the competitive community byeliminating anyone they view as weak. They believe that bullyingplayers by using insulting terms rather than helping them progressas players is helping the community, I do not even have to pointout the sheer stupidity of this logic to show how wrong theyare.

To those who are emotionallysensitive, this could be a very discouraging challenge to overcomeand with this problem getting worse, one of my fears is that we maylose some talented players over this. It would make me beyondfurious if I were to hear about a talented individual who decidedto leave our community because they were tired of having to dealwith the constant bombardment from the amateur players. It wouldnot only be a very embarrassing moment for our community, but thisproblem could potentially hurt us on a professional level withmajor companies not wanting to even associate themselves withus.

As I have become older, mytolerance for this behavior has worsened, but my understanding forthe individuals who commit the behavior has improved. Althoughthere is no logical reason to act this way and this behavior mustchange, we can very easily compare this behavior to other forms ofcyber bullying, as well as real life bullying.

I am almost certain that atleast a small percentage of the individuals who spend all dayplaying video games and act like men amongst boys around peoplethey view to be not as significant as they are have some sort ofproblem they are facing in real life. It could be bullying they arefacing outside of the game, social problems they may have in reallife or anything else that may encourage them to act this way in avideo game. Although we should never make fun of them for havingany problems, we should always keep in mind that these bulliescould very easily have their own fair share of problems.

Someone who commits thisbehavior believes that this self-centered thinking will help themreach their goals of going pro. As someone who has witnessedseveral talented individuals rise and fall due to this behavior, Ican assure you that this is definitely not the path you want totake if you want to go pro. A perfect example of this is a playerthat I know very well by the name of Scaryotic.

Formerly known as Karyotic orKaryotic Fours, this individual has made himself well known forbeing one of the rudest and most self-centered individuals to playthe game. Although he is an individual with great talent, hisbehavior has cost him several opportunities with great teams whohad to release him due to his toxic behavior hurting the overallvibes of the team. A player who has all the talent in the world andwho was so close to landing a spot on a pro team now spends histime hopping from one amateur team to the next, hoping that oneday, someone could look past his negative behavior and glorify himfor all of his talent.

Unfortunately for him, everybodyelse that competes could care less about his talent at this point.Love him or hate him, no one can deny that Scaryotic is the perfectexample of how sheer talent alone cannot carry you to a pro teamwhen your negative behavior is a problem.

My biggest fear about all ofthis and what could quite possibly be the unfortunate reality isthat these kind of players will never change and our community willalways be plagued with these individuals. In this case, we mustmature as a community and not promote this kind of negativebehavior by glorifying the individuals who disrespect others.Understand that acting like a jerk will not make you look anybetter than anyone else and if you encourage others to act like ajerk, you are just as much of a problem as they are. We must be thebigger individuals in this matter and not allow these bullies tocontinue finding reasons to act up and discourage others. It is nota logical way to progress as an individual and is a proven methodto hurt not only your potential of going pro, but also hurtothers.

What do you think about theproblem of massive egos and cyberbullying within our community? Letme know in the comments section below.