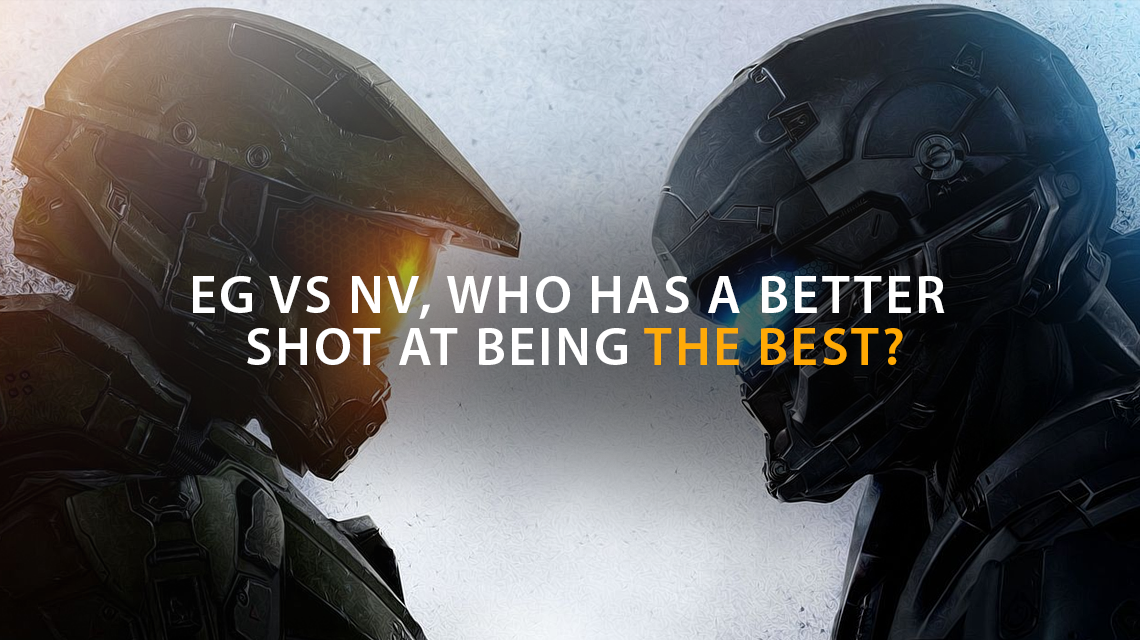 Ever since Eric“Snip3down” Wrona’sdeparture from EvilGeniuses to join the boys in blue, TeamEnVyUs, a bit of a fan rivalry has formed between both clubs.Those who are loyal to EG are confident that their new teamconsisting of Tyler “Ninja” Blevins,Cameron “VictoryX” Thorlakson, Jason“Lunchbox” Brown and Justin“Roy” Brown aretalented enough to win a championship, while those who are hugesupporters of Snip3down or nV’s entire Halo roster consistingof Austin “Mikwen” McCleary,Justin “iGotUrPistola” Deese andCuyler “Huke” Garland believethat nV has a real shot at winning a championship. Considering thelevel of talent both of these teams have, both are capable ofwinning a championship, but being as unbiased as possible, whotruly has a better shot at being the best?

Statistically speaking, nV hashad a much stronger performance than EG in scrims. With a 96-41win/loss ratio compared to EG’s 81-85 win/loss ratio, nV hashad a much easier time beating their competition including notableteams such as Enigma6, Counter Logic Gaming, Luminosity Gaming andeven EG in their latest scrim. Going deeper into the stats, nV isslaying a little better than EG with an overall team K/D of 1.12compared to EG’s team K/D of 0.98. Keep in mind that nV hasbeen slaying well against every team including slay-heavy teams,while EG seems to struggle just a bit more against some of theteams. Even in objective game modes, nV seems to perform muchbetter than EG in being able to win the majority of their objectivegames. However, I will note that in some situations, EG seems to bestronger than nV when it comes to running a flag as a unit as wellas stopping an opponent’s flag run. This was very noticeable intheir latest scrim yesterday when EG made easy work out of nV ingame 13 of their scrim, which was CTF on Coliseum. EG was able todefeat them 3-0 but the statistics alone don’t explain theentire story. In many situations, I noticed just how well EG canpull a flag as a unit and prevent the opponents from caving in onthem and stopping the flag run which to me shows their strongchemistry. In many situations EG was also able to stop many ofnV’s flag runs even when nV had numbers over EG in somescenarios, which was quite impressive to me. CTF, at least onColiseum, seems to be one of those unpredictable game modes for EG.Although EG doesn’t have a very impressive win record on this mapplaying this game mode, in certain situations EG plays god-like inthese settings and as a fairly new team, EG is still capable ofgrowing stronger and being able to get even better in this gamemode and many others.

Another thing I would also takenote on is how both of these teams play. nV seems to perform muchmore consistently than EG in most games allowing them to besomewhat predictable in most matches. With EG on the other hand,they seem to be much less predictable, winning and losing certaingames that are downright confusing. The best way to describe EG isas an emotionally driven team. Being both a gift and a curse, EG iscapable of looking like the best team in the Pro League in somegames when they are emotionally determined to win. However, they attimes look like a complete disaster when they have a hard timefinding the inspiration to win games and lose confidence inthemselves. This makes EG a pretty big question mark come thebeginning of Pro League as their emotional stability will mostlikely be a major factor as to how well they will do.

Going past all of this, bothteams seem to have the same mindset. With both teams being backedby prestigious organizations and with every player in this clubbeing extremely competitive, both sides are hungry to win achampionship. Looking at each team’s streams, both teams evenact the same. Each team makes sure to breakdown each and everyscenario for each map and listen to one another, knowing thateveryone is capable of contributing to the team. This may seem likea basic concept every Pro Team must be able to do well, but in manysituations some teams that simply don’t work well togethermay tend to bicker at each other after loses and play thenotoriously unproductive blame game that gets teams nowhere. One ofthe best examples of this last season was OpTic Gaming where therewas almost always a bit of bickering between one another after aloss, leading to the  belief that this may be the reason whysome members didn’t bother streaming their matches. Thereality is that being able to maintain your composure even after aloss and being able to look at the bigger picture is something notevery team can do very well. Typically, only the best teams orthose destined to be the best do this constantly and that is whyyou see certain teams continuing to win with no sign of slowingdown. Talent alone can only get your team so far and eventuallyanother team will be able to match up to your talent. In thissituation your maturity as a player and ability to stay composed,look at the bigger picture and reevaluate the current situation youare in, will wind up being tested. This will allow you toprepare yourself and your team for the next wave of competition.This is the ability that top pro teams have been using ever sincethe dawn of competition and this is an ability both nV and EGposses.

Picking which team is morelikely to win a championship is quite difficult. Both teams arehungry to win and there is no difference between which team wantsit more than the other. nV may be the more consistent team thatstatistically looks better, but statistics and consistency meannothing in the end if you crack under pressure. EG being the moreemotionally driven team will be a big gamble for anyone who choosesthem to win the championship. If they are hot, they can wipe outthe competition, but I am still unsure if EG can stay this hot foran entire season, not to mention the Season Finals. In the end, Iwill have to chose between the consistency that comes with nV, oruncertainty that comes with EG and considering how early it is inthe season, I am confident that EG will be able to improve on theirweaknesses and perfect their strengths. With the added help ofveteran Coach Ryan “Towey” Towey and thelegend himself, Tom “Ogre2” Ryan, helping to guidethis team to a championship, EG will have all the tools they needto get to where they want to go.

Which team do you think will wina championship? Let me know in the comments sectionbelow.