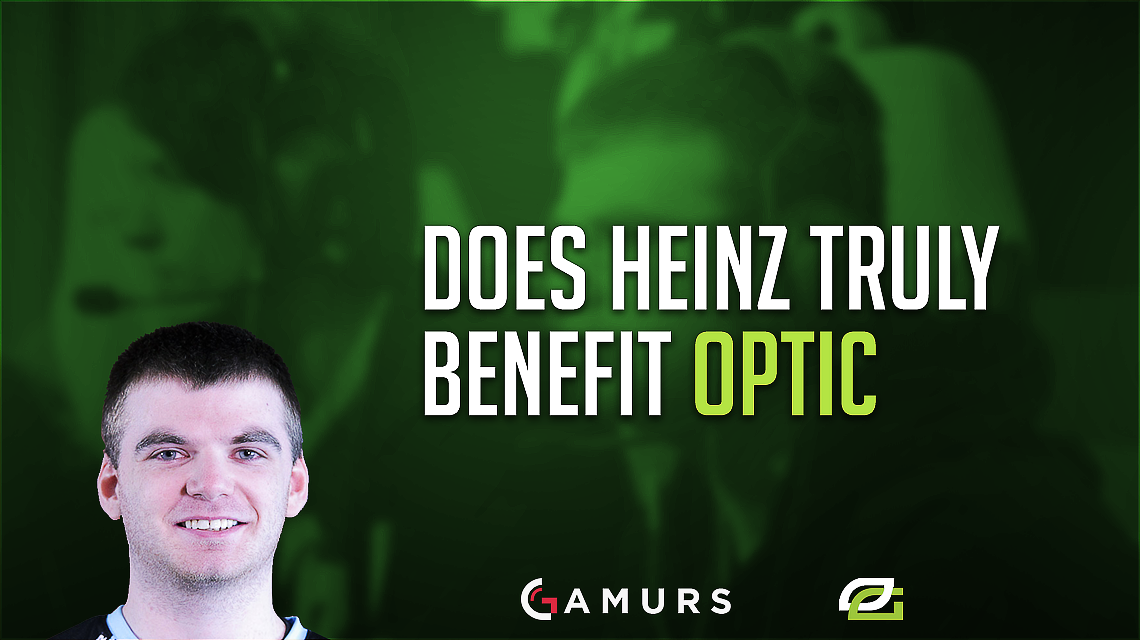 Recently, OpTic Gaming’s Halosquad picked up their new fourth player, Richie“Heinz” Heinz in the hopes that his unselfishand supportive play would help bring out the best in Nick“Maniac” Kershner, Bradley “aPG” Laws and Aaron “Ace” Elam who are predominantly known forbeing some of the best slayers in the League. This change cameafter a controversial team decision to release former member Corey“Str8 Sick” Sloss from the teamafter a rough season that could have resulted in OpTic notqualifying for the Pro League.

In their past four scrims as anofficial team, OpTic has won none of them. Although they onlyplayed against Evil Geniuses, Enigma6 and Team EnVyUs, who arepredicted to be three of the best teams in the Fall Season, theyhave an overall win ratio of 10 to 45 which to me shows that OpTicstill can’t hang with the top dogs. OpTic has an overall K/D of0.85, which was a number that I was expecting to be much highersince Heinz’s role on the team was to facilitate as asupportive player and make slaying much easier for theother three members. Individually, Heinz has had an averageperformance. With an overall K/D of 0.80, Heinz has definitely beenslacking in the slaying section, but with a total of 508 assist tohis 579 kills, his supportive style of play has definitely impactedthis team.

Some to this day still believethat dropping Str8 Sick to maintain the trio of Ace, Maniac and aPGwas a mistake as Maniac and aPG both seemed to have the most amountof problems with this team throughout last season. The addition ofHeinz seems to have added more fuel to this fire since Heinz bringsa bit less slaying power compared to Str8 Sick. His supportivestyle hasn’t helped his team win scrims and is making somefear that OpTic will once again be the lackluster disappointmentthey were last season.

Although I can’t cross outthe possibility that OpTic will once again become an embarrassmentthis season, I do have a sense of hope for this line up. My biggestproblem with OpTic last season, and what I strongly feel was theultimate downfall for them, was the fact that they had too manyslayers. Slayers tend to play a bit more selfish in comparison tosupport and objective players. Since their primary goal is to killtheir opponents, slayers tend to take charge in most engagements.Slayers are typically the first ones to engage their opponents andthe last ones to leave the engagement due to their ability to getkills more efficiently than their teammates. This makes it veryeasy for slayers to develop selfish habits that may put their teamsat risk, such as baiting their teammates just so they canget an extra kill. Although I am not saying OpTic’s problemlast season was that players were selfishly baiting each other justto get better stats, one can make the argument that having so manyslayers on one team may have caused some players to think and playmore selfishly than they should have. If this was the case, thenOpTic’s last line up would have never worked out thereforemaking roster changes necessary.

Although Heinz’s additionto the team hasn’t automatically given OpTic wins, keep inmind that the regular season hasn’t even started yet andOpTic still has plenty of time before the important matches begin.With every member on OpTic having a negative K/D, it would be wrongto blame Heinz for their problems. When you have three otherteammates on your team who are known for being some of the mostindividually talented players in the game and they are goingnegative as well, the problem goes from being focused on anindividual to being focused on the entire team. OpTic doesn’tlook great at the moment, but if everyone could start putting upbetter stats, Heinz’s role on the team may start to becomemore noticeable and this team may be able to get the ballrolling.

What do you think about Heinzbeing on OpTic? Let me know in the comments sectionbelow.