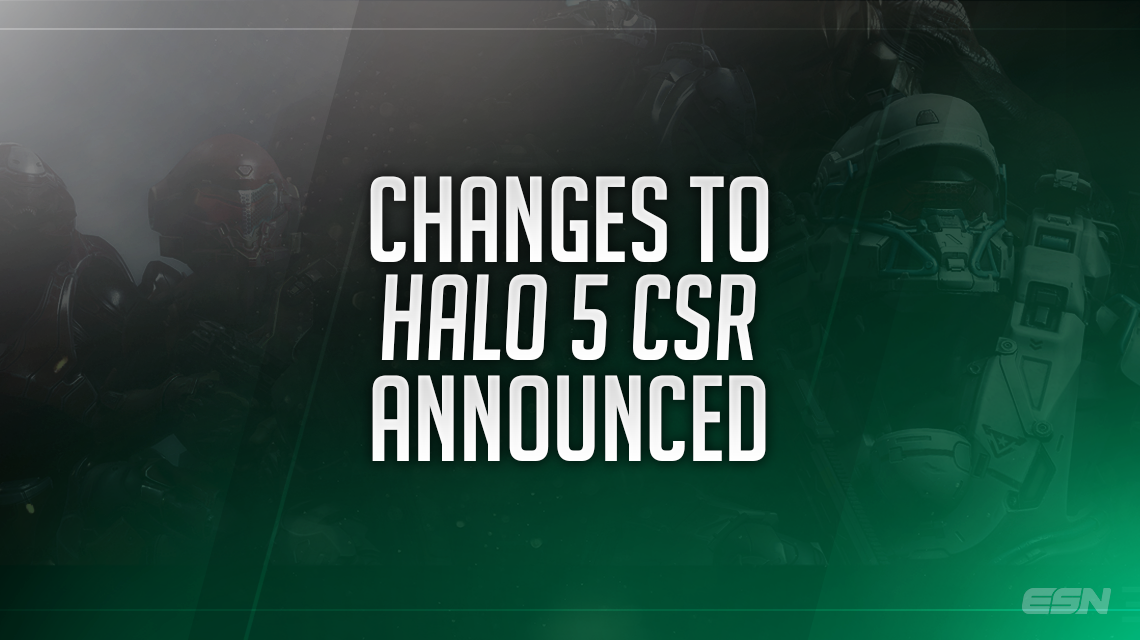 Last night, 343 Industries’ Studio Head Josh Holmes put the cherry on top of what has been a very good week for Halo fans, as he outlined changes made to Halo 5: Guardians’ skill-based matchmaking system, the Competitive Skill Rating (CSR) among other things.

Launching alongside Halo 5 on Oct. 27, CSR, although sharing the name with its Halo 4 counterpart, operates in a very different fashion. Instead of using the traditional 1-to-50 ranking system found in Halo 2, Halo 3, and Halo: The Master Chief Collection, Halo 5’s CSR is of the division-based variety — in the same vain of Call of Duty: Black Ops II’s League Play. Featured in Halo 5’s December 2014 Beta, many readers may be acquainted with how the system works.

Get an in-depth look at Arena matchmaking, ranking, & the banhammer with the Halo 5 MP Team: http://t.co/BYwTP5VpLq pic.twitter.com/xxUKMG1eL7

Among the litany of changes announced, the most obvious was the renaming of the ranking divisions. Holmes claims that the studio made this change “to provide a more familiar and easily understood sense of progression between ranks.” With this in mind, the CSR ranks in Halo 5 are as follows: Furthermore, rank divisions are now subdivided into six different tiers, doubling the previous total of three tiers. Despite the aesthetic changes, the system under the hood continues to work exactly the same. Before being placed in one of the seven ranks, players will have to play 10 placement matches against players of varying skill in order the properly assess the player’s skill. Moreover, to quote Holmes, “the ONLY way to increase your rank is by winning.” In contrast, losing decreases one’s rank; however, “you will never drop down a whole rank from losing” (as in going from Diamond to Platinum).  This statement echoes what Holmes said in February when he said, “Philosophically we believe that in a team sport the only thing that should matter is wins and losses. We also believe that incentivizing players to prioritize their own individual stats in a team game can undermine team play.” Holmes also described how the Onyx and Champion work. I’ll let Holmes explain: “Once you reach Onyx, you will be shown your raw CSR score. Winning no longer increases your tier – it instead increases your CSR score. This allows you to compare yourself with greater precision to other players within the Onyx rank. If you establish yourself as one of the top 200 players in a playlist, you will earn the highly coveted rank of Champion and be shown your place within the top 200.” In other words, the system transitions into a type of leaderboard/ladder with players constantly leapfrogging and falling beneath one another by winning or losing, with the Top 200 becoming “Champions.” Holmes detailed how seasons work in Halo 5. According to the multiplayer design team, CSR in select playlists will reset periodically, forcing players to replay their placement matches. Holmes states that seasons will last for a month and that “anybody who earns a CSR in a Seasonal Playlist will earn cosmetic rewards to commemorate the Season.” Important to note that all playlists in Arena will be ranked. Finally, according to Holmes, a number of systems are in place to combat issues of quitting, team killing, idling, and excessive disconnecting, problems that have plagued the Master Chief Collection since Day 1. Players who repeatedly do these things, Holmes says, will make you “receive a ban and be prevented from entering matchmaking. The duration of each ban is dependent on the offense and becomes more severe with each successive infraction.” Not surprisingly, this sounds extremely similar to the new systems that were added in the last MCC patch, that you can read about here. Also, he reassured fans that players will never join a game in progress, stating that “you will get a fresh match every time without fear of putting your hard earned CSR at risk and joining a losing team in the middle of a match.” Tell us what you think about the changes made to CSR. Are you excited? Tweet us your thoughts @ESNHalo.