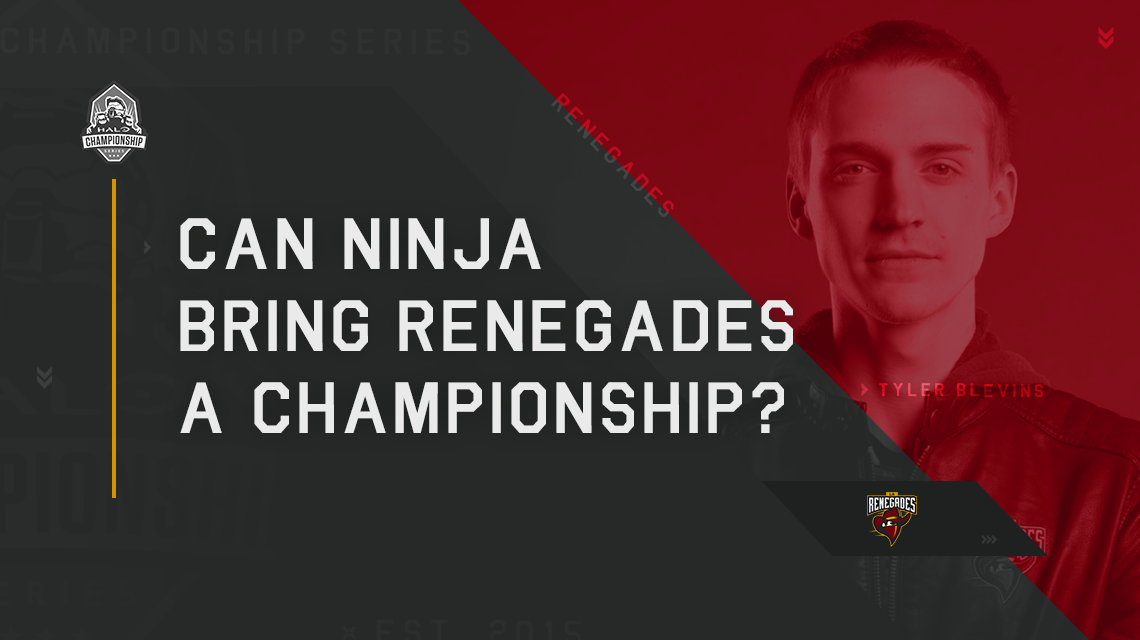 With Renegades being one of the four teams that qualified for the Halo Championship Series: Pro League Summer Finals, all that’s on their players’ minds is winning this event and bringing a title home to the young and ambitious organization. With popular player Tyler “Ninja” Blevins being the cornerstone to this Halo team, could he lead them to victory?

Over the years, Ninja has received a lot of love and a lot hate. Formerly being the most popular player in the scene prior to OpTic Gaming embarking on their Halo journey and Michael “FlameSword” Chaves as well as Nick “Maniac” Kershner blowing up in popularity, Ninja has put a lot of time and effort into helping grow the content creation side of Halo. While many praise him for his efforts and constantly support him, some believe this is a sacrifice that has slowed down his progression as a player as well as put his team at risk. Even with all the hate and self-inflicted stress, Ninja is still a four-time event winner as well as one of the top players in the Pro League.

With the recent hype around competitive Halo and all the support that came with it, Ninja has taken some time off of streaming and has pretty much completely stopped creating content on YouTube. He has done this to better perfect his craft as a competitor and give his team the best chance of winning. Although I haven’t necessarily seen him improve that much compared to his golden years back in Halo 4 with these changes, sacrificing his content creation must be helping his team since he continues doing it. This sacrifice says a lot about where Ninja’s mindset is at the moment. Never truly receiving full appreciation from many people within the community, Ninja is tired of receiving hardly any credit when his team wins and taking the brunt of the criticism when his team loses no matter how much work he puts in. At the end of the day, no matter how much you love him or hate him, Ninja is a competitor and he will do whatever it takes for his team to win.

Unfortunately for him, determination and hard work alone will not bring you to the top. With today’s competition, you must always be playing at your best if you want to be the best in the world. Now, having to face the monsters of Counter Logic Gaming, Enigma6 Group and Team EnVyUs, Renegades certainly look like the smaller, more vulnerable prey in this pool. Although Renegades has all the tools to win, their 7-6 record in the Pro League tells me that this team is very unpredictable. When you look at all the matches they had this season, you can also tell that this team has had some pretty questionable loses. In Week 6, they were able to defeat both Evil Geniuses and Team EnVyUs, but they lost to Team Liquid, one of the worst teams in the league, when Week 7 came around. It’s possible to argue the point that maybe Renegades weren’t giving it their all since it was Team Liquid, but these competitors going to Finals should be trying to end their season on a high not, especially considering the strength of the teams they will be facing at Finals. This lack of consistency is very worrisome and, although Ninja may not be the sole reason to Renegade’s inconsistency, I do wonder at times if this roster consisting of Ninja, Cameron “Victory X” Thorlakson, Hamza “Commonly” Abbaali and Zane “Penguin” Hearon is the winning formula.

If Ninja and Renegades want to win this event, each one of them needs to be completely invested in the game. Although they have accomplished a lot being able to make it into the Finals, they are coming into this event being the clear underdogs and their opponents know this. It’s probably the last thing this team should rely on, but Renegades will most likely have to rely on Ninja’s ability to make clutch plays. It is not a good habit for any team to rely on one player’s ability to make the game winning plays every time, but Renegades may need a few clutch plays to take on CLG and E6 when they are at their best. Both of these teams will be giving it their all and something tells me that if a fire isn’t lit inside Ninja, Renegades will collapse. In their two Pro League matches against CLG, Renegades have only been able to take one map. Although they have had two relatively competitive matches against E6 in the Pro League, E6 did not have the same fierceness in those games that they have shown in the past. At times, E6 plays so well that they even make CLG look silly. E6 being the only team to defeat CLG this season says a lot about what this team is capable of, and if they apply that same level of dominance to Renegades as they have to CLG in the past, I don’t see Renegades coming out of that series alive. The only team in this event that Renegades have had a very competitive series with this season is EnVyUs, with both teams split in match wins for the regular season. Renegades always seems to play very well when facing EnVyUs. Both of these teams are at a very similar skill and chemistry level and you can definitely see that when they play. Either way, Renegades needs to view themselves as the much better team if they want to defeat nV.

Although Renegades’s chances to pull of a great upset and win the event don’t look great, it isn’t impossible. As I said earlier, Renegades need to play at a whole new level and Ninja needs to thoroughly outslay the enemy teams if they want to win this event. We have seen Ninja carry his team through tough situations countless times throughout his career, making me confident that he still has what it takes to do it again.

Do you think Ninja can bring Renegades a Championship? Let me know in the comments section below.