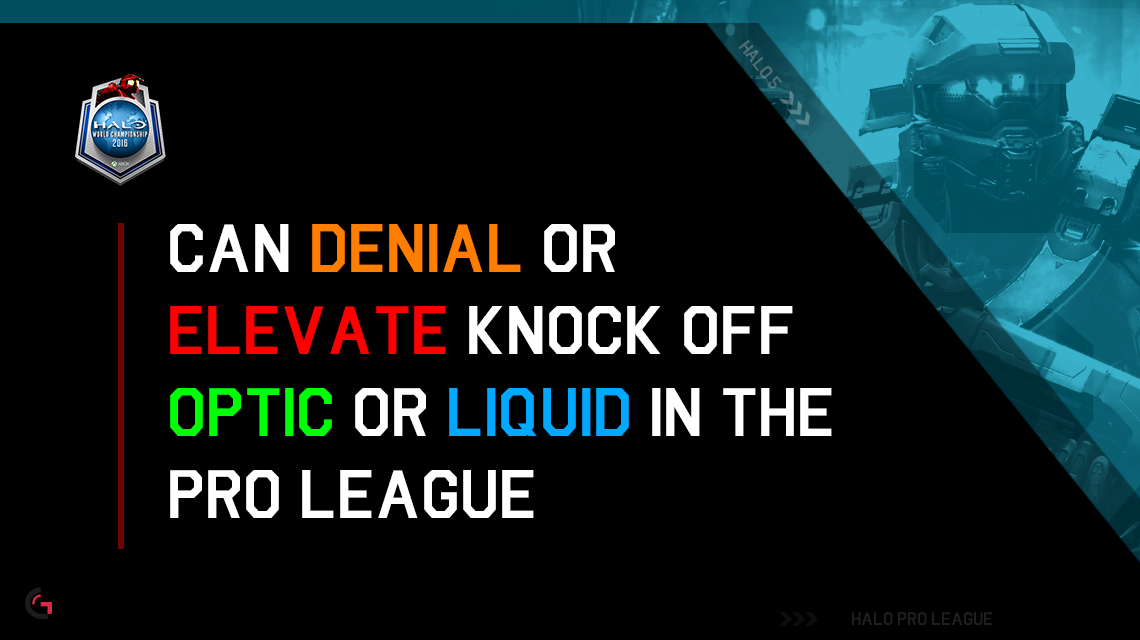 After several months of battlingthrough a pool of hungry amateur teams looking to make a name forthemselves, Denial and Team eLevate have finally put themselves ingood position to do this. Now with both of them having theopportunity to steal either OpTic or Liquid’s spot in the ProLeague, does Denial or eLevate have what it takes to get the jobdone, or will OpTic Gaming and Team Liquid upset these two amateurteams by sending them back to the Open Circuit?

Both Denial and eLevate are veryconfident that they have what it takes to defeat either OpTic orLiquid, with both of these teams showing their superiority over theother amateur teams, Denial and eLevate know that their teams aredestined to make it into the Pro League. Over the past few months,both teams have constantly faced each other in the Grand Finals ofseveral Open and Legendary Cups. Both teams know each other verywell, but unlike in the past where their enemy was each other, nowtheir enemies are OpTic and Liquid.

While Denial and eLevate haveboth performed very well this season, OpTic and Liquid have beenpretty big disappointments, being the two worst teams in the ProLeague. Both teams started off with a lot of confidence, believingthat their new rosters would provide them with better placings, butunfortunately it has not panned out that way and although OpTic hassomewhat improved this season compared to last season, Liquid hashad a major downgrade in performance.

I have to believe that thehorrendous performances from both of these teams will hurt theirconfidence come regulation when they will have to face Denial andeLevate. Knowing that the two opponents you will be facing are thetwo best amateur teams coming from the North American Open Circuitwith all the confidence they need to defeat you is a very dauntingsituation to deal with.

If I had to choose which teamwas better prepared for these two amateur teams, it would have tobe OpTic. Although they have grown to be a very unpredictable team,OpTic always seems to step up their game when competing on LAN andconsidering how this team has not had many positive notes to takein the past two seasons, I believe that OpTic is just a bit moredetermined to stay in the Pro League compared to Liquid.

Looking at Liquid, this team hasbeen an outright disaster that I personally believe has little tono chance of improving with this roster. Time and time again,Liquid has proved that the players they have representing them atthe moment simply do not work well together and although a completeroster overhaul may not be necessary with Spartan and StelluRlooking to become a solid due, Eco and Danoxide, in myopinion, are not the best fit for Liquid and at thispoint.

I am pretty sure everyone onthat team is aware of this and is ready to move on. It is unclearif Liquid will maintain its involvement in Halo if this team doesnot qualify but I can almost guarantee you that OpTic’sconfidence and overall satisfaction with their improvementscompared to their horrendous performance last season gives them asignificant advantage coming into regulation.

If I had to choose which team ismore prepared to defeat either OpTic or Liquid, I would have tochose Denial, although this decision is much harder to chosecompared to my last decision. Denial, in my eyes, has an overallstronger roster compared to eLevate. Time and time again, we seethese two teams face each other and in most situations, Denialcomes out on top. In many situations when Denial defeats eLevate,their key factor to defeating them is Rammyy’s individualperformance. As one of the playmakers for this team, Rammyy hashelped this team multiple times by making the necessary playsthis team needs to get them the win. He is a player who does notshow any weaknesses come crunch time and at many times even stepsup his game. His ability to continue performing well even undersevere pressure has constantly put his team above eLevate andalthough he is not the only reason why his team is as good as theyare, he is certainly a crucial asset.

Whether Denial faces OpTic orLiquid, this team in my eyes is better prepared to face either ofthem compared to eLevate and I personally believe that Denial wouldhave a better chance of doing well in the Pro League if they wereto make it compared to eLevate.

What do you think about thepossibility of Denial or eLevate Knocking off OpTic or Liquid inthe Pro League? Let me know in the comments sectionbelow.