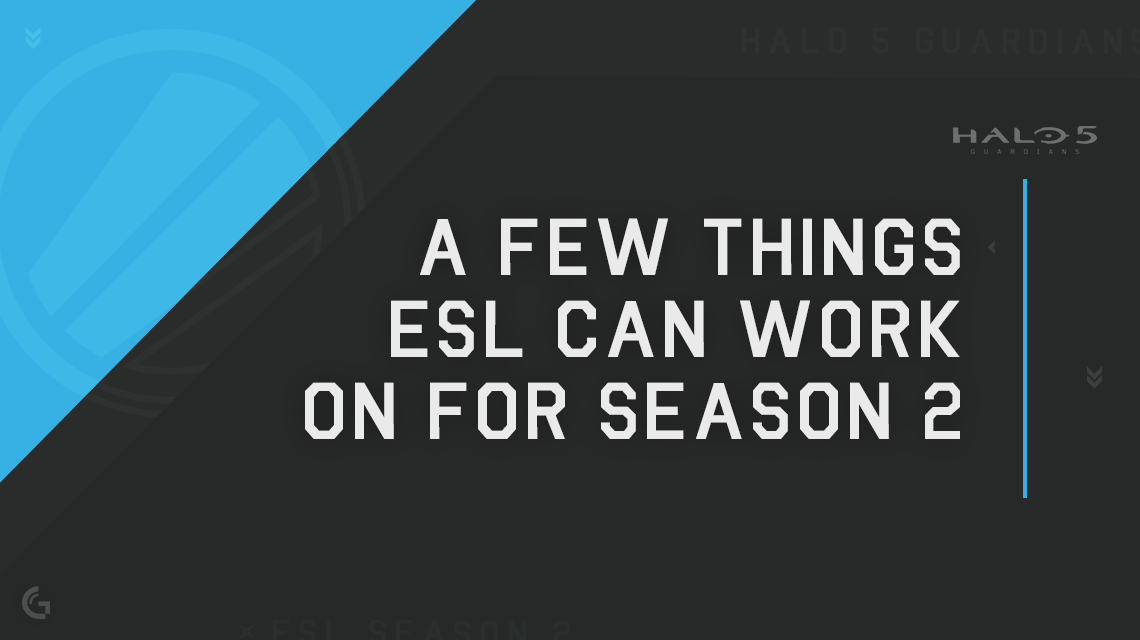 With the first season of the HCSPro League in the books, everyone is starting to unwind and relaxafter a very eventful season. With this being the offseason, nowis a great time for me to go over a few things ESL can work onfor Season Two.

This season had a lot ofpositives to take note on. With a few new prospects emerging in thescene, Counter Logic Gaming’s unstoppable reign of terror,the uncertain but exciting future of Team Liquid and the secondchance OpTic Gaming has earned to redeem themselves as a solidifiedcompetitive team makes many of us very excited to see what SeasonTwo will bring.

Unfortunately, this season wasno where near perfect and there are quite a few things ESL need towork on to improve the Pro League for next season. To avoid anyconfrontations with anyone in the community, these ideas will notbe ranked based on importance. However, I most likely will not belisting every idea the community has, so if you feel there is a waythat ESL can improve the Pro League and it is not in this article,please feel free to let me know in the comments.

I am sure most of us would agreethat there was simply not enough events this season. Although therewere three events this season, all three were closed invitationals,therefore only teams that were invited could compete in them. Thelack of open events has definitely taken its toll on the communitywith a lot of anger coming out of some players over the lack ofevents. This recent drought of events has also taken its toll onthe pro players with many saying that the season finals were a bithard to adapt to due to the lack of events they could have competedin this season. If you want to read a more in depth article aboutthe importance of LAN events in Halo 5, click here.

As many of you heard, ESLinitially had no plans to stream the relegation tournament. Thiswas due to there not being enough time to stream both relegationand season finals matches, so ESL felt it was best to just notstream relegation. I, as well as many angry fans, heavilycriticized ESL for doing this and with the power of the community’sfeedback, ESL came to a resolution that allowed us to see most ofthe relegation matches.

Implement Some ForgeMaps To The Map Pool

This is just my opinion, butsome of the maps ESL and 343 are using for competitive play are notgood at all. Although most of the maps in the pool work fine,Stasis is one of those maps that just makes me cringe. Being asomewhat improved version of the map Torque, Stasis has a fewchanges that are designed to help improve the player movement onthe map.

Although I do recognize thechanges, it is still a very bad map, in my opinion, that is notworth a spot in the map pool considering all of the great Forgemaps designed for competitive play. I am sure that if 343 reviewssome of the Forge maps the community has made, they will quicklyfind some that easily look and play better than Stasis.

This may be a bit picky for meto point out, but I personally find it annoying that the prizes foreach placement in the season finals were not fully disclosed untila few days later. Infact, I did not find out this information fromESL, but instead, through a tweet from Beyond Entertainment.Although I appreciate Beyond for doing some extra work to find outmore information about this, I would much rather have seen theinformation quickly and clearly given to me like in pastevents.

Although I know many of the topprospects who competed this season are hoping to land a spot on aPro League roster, the reality is that most viewers will not have aclue who they are. Although part of the excitement of seeing theseyoung stars compete is that you have no idea who they are, Ipersonally think it would be a really entertaining and impactfulidea if ESL were to do some sort of documentary on these youngplayers so that way they can talk about all of the challenges theyneeded to overcome to put themselves in the position they are inright now.

This is something most sportsleagues do because it is a way for the viewers to get a betterunderstanding of just how passionate these players areabout the game and maybe even give us hope that we may go proone day if we work just as hard. This is just a little idea of mineand I do not think it would hurt the Pro League if ESL did not addthis, but I do feel it would be a great addition.

Although open events shoulddefinitely come before this, more small scale invitational eventsonly for the pro teams would definitely be exciting to watch aswell. We saw ESL host three Invitational LAN events for the ProLeague this season, but I personally feel that it would bebeneficial if some of the Pro League matches were played on LAN.Having one or two Pro League matches played in the ESL Studios inthe middle of the season would definitely help every team,especially those teams who tend to play better on LAN.

These are my ideas on how ESLcan improve their Pro League format in Season Two. As I saidearlier, there are most likely other ideas that you believe willmake Season Two better, so please feel free to tell me them in thecomments section below.