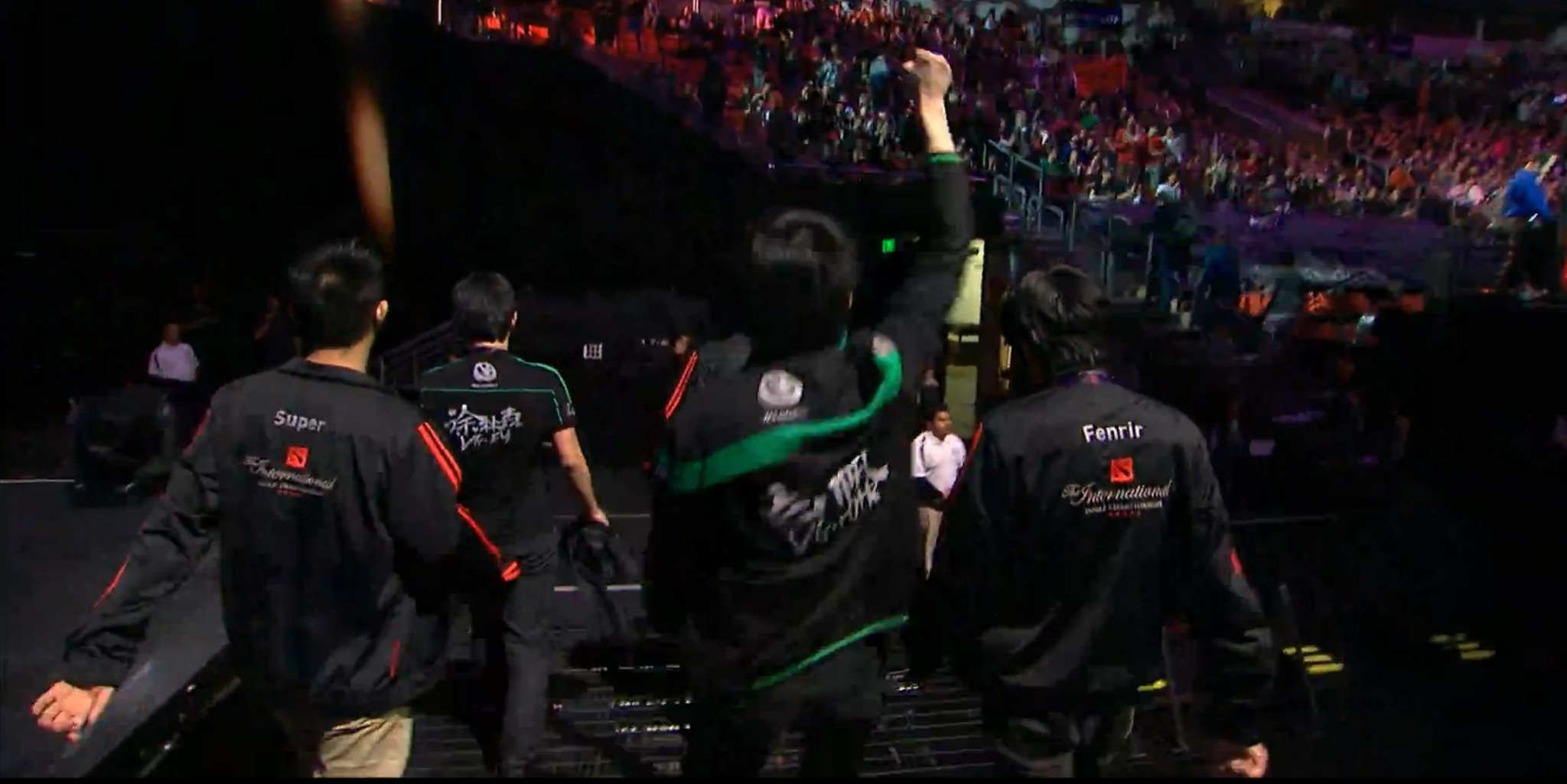 After three days of the most epic Dota 2 action you’ll ever see, we finally know which two teams will compete for the $5 million top prize in the grand finals of The International 4 tomorrow.

Vici Gaming will challenge Newbee for the Aegis of Champions, the trophy awarded to the victor of the event. It’s the first time two Chinese teams have met in the final of Dota’s biggest tournament. While it’s not a surprise two Chinese teams have made it far, few would have picked Newbee or Vici Gaming as finalists out of the strong field of Chinese contenders including Team DK and Invictus Gaming.

To reach the final, Vici Gaming had to beat Chinese counterparts Team DK and follow it up with a win against Evil Geniuses, the last remaining American team at the event. Vici Gaming’s extremely aggressive push strategies proved too powerful for the Americans in a close 2-1 series.

Evil Geniuses bows out of the event with a third place finish, worth $1,033,649. While it seems disappointing now that they didn’t go further, few expected the team to reach such heights. They also have the benefit of being one of the youngest teams in Dota—three of their members are high school age. The sky’s the limit for Evil Geniuses. But they haven’t reached that limit yet.

Vici Gaming won the first and third games against Evil Geniuses in 15 and 16 minutes, showcasing just how powerful their lane lane push can be. Evil Geniuses had their time to shine in the second map, putting on a show for the American crowd. Saahil “UNiVeRsE” Arora in particular pulled off some amazing Chronospheres with Faceless Void, including a perfect one at 28 minutes that captured three members of Vici Gaming.

The good natured captain of Vici Gaming, Bai “rOtk” Fan, called winning two games so fast “awesome.” Fan wasn’t shy in showing how he felt after the match, pumping his fist towards the hundreds of Chinese fans who travelled the Pacific to watch their Dota heroes.

It might be hard for Vici Gaming to keep the momentum going with their fast paced strategy in the final against Newbee, who has spent the past two days watching matches and analyzing every facet of the foes they might face.

Still, Vici Gaming are no strangers to beating their Chinese brethren. They eliminated Team DK, considered the favorite entering this tournament, earlier today in an emotional match for Vici Gaming and especially Fan. Xie “Super” Juanhao and Fan were both members of Team DK at the last International, where the team placed in the top six. Fan called Team DK captain Xu “BurNing” Zhilei, who plans to retire after this tournament, the “best player in Chinese Dota,” showing respect to the man whose career Vici Gaming just ended.

Xu passed the proverbial torch to Fan after that match, telling Fan to win the tournament for him. But it won’t be easy for Vici Gaming. Newbee may have been a dark horse entering The International, but their play at the main event was nothing short of astounding. Newbee features superstars of their own, like their captain Zhang “Xiao8” Ning. Their play has been mistake free, ever since they exited the group stage.

It should be a close best-of-five series, and a historic one at that. $5 million are on the line for a single series of Dota.