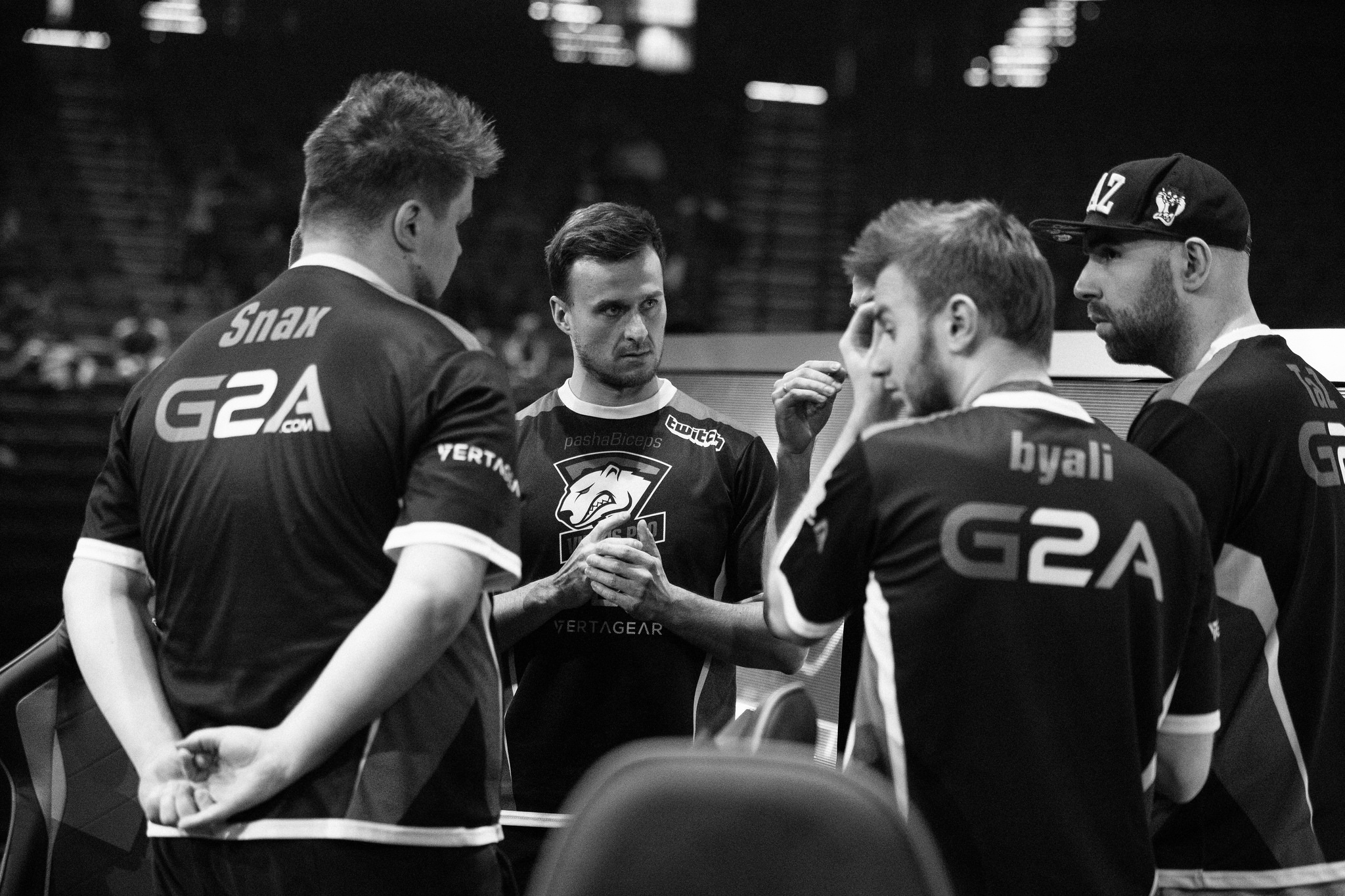 When various rosters are examined, or when the results of upcoming matches are predicated by fans or the community at large, considerations concerning a team’s map strength and depth are perhaps too often overlooked. In an attempt to increase consideration of this key component of the competitive scene, this article will attempt to name the current best team in the world on each specific map, given the following criteria:

When Lukas “gla1ve” Rossander was first added into the lineup, Astralis was still a meandering former great searching for some sort of resurgence. Perhaps the moment where it became clear that Astralis was on an inevitable trajectory back towards the top was when they challenged SK on Train in the IEM Oakland semifinals, where they very narrowly lost 16-14. The official return probably happened when Astralis actually defeated SK in the ELEAGUE Season 2 semifinals, snapping SK’s 17 game win streak on the map. While recent one-sided losses to GODSENT and Virtus.pro on Train put their reign over it in serious jeopardy, Astralis still has the best accomplishments on the map over the last 100 days.

While fans who highly value recency might be aching to call Virtus.pro the current best team in the world on Train, they still don’t quite have the accomplishments to overtake Astralis, per the guidelines of this system. Their critical wins over Astralis and the new SK at DreamHack Masters Las Vegas are surely very impressive, perhaps even on par with Astralis’ wins over SK with Fnx, and Virtus.pro, themselves, but the quality of VP’s wins on Train falls off pretty sharply beyond those two. Astalis’ three wins over OpTic, two of which came from tournament finals, are clearly more impressive than VP’s remaining three wins, and when you consider Astralis’ additional, more middling wins over NiP and the pre-shuffle G2, the advantage clearly seems to lie with Astralis. If VP is going to completely overtake Astralis and become the definitive number one team in the world, continued control over Train will probably be needed. In fact, when you think about the current popularity of Train amongst the current leading teams of the world, it may very well be the case that the team who controls Trains will rule CS:GO.

In an era where Overpass has become increasingly favored and played by the top teams, Astralis has become the undisputed leaders. Astralis’ wins on the map have been a frequent component in their late-tournament series play. Astalis won a map on Overpass versus SK in the ELEAGUE Season 2 semifinals, OpTic in the ECS Season 2 Finals, Virtus.pro in the ELEAGUE Major finals, and Virtus.pro again in DreamHack Masters Las Vegas semifinals. Like SK’s Train back when they played with Lincoln “fnx” Lau, Astralis’ hold over this frequently shared map pick has given the Danes a massive advantage in series play, leading to the team’s world-leading status over these past few months.

Since adding gla1ve into the lineup, Astralis’ has been unbeaten on Overpass, with one key exception. Against all odds and expectations, a then-underwhelming OpTic Gaming team somehow stole map three of the ELEAGUE Season 2 finals, Overpass, away from the soon-to-be world champions. Before Peter “stanislaw” Jarguz left the team following the major, OpTic themselves looked fairly dominate on Overpass, winning three matchups on the map in the ELEAGUE Season 2 group stage and playoffs, while finding an additional two wins at ECS Season 2 before finally falling to Astralis in their finals rematch. Unfortunately, due to their tough schedule and poor performance at the major, in addition to the departure of Stanislaw, OpTic has yet to play Overpass again on LAN in 2017, despite the promise shown last November and December.

With many top teams rebuilding or changing their roster slightly in the aftermath of the major, most maps have firmly fallen into the hands of either Astralis or Virtus.pro. However, Gambit’s prowess on Cobblestone nicely breaks the established paradigm, as their immaculate six game win streak barely outweighs Virtus.pro’s more diluted record. Currently, Gambit is only ranked the seventh best team in the world in both the ranking systems of HLTV and Thorin, which makes their specialist sovereignty over this map all the more impressive.

Virtus.Pro has four more wins on Cobblestone than Gambit over the past 100 days, but the quality of wins and their imperfect record prevent them from taking their top spot. Of those 10 wins, five came from the sparsely attended, but high-paying WESG 2016 Finals, all of which came from not particularly notable teams. Now, Gambit and Virtus.pro have shared wins over OpTic with Stanislaw and North with Ruben “RUBINO” Villarroel, but Gambit’s wins over Cloud9, pre-shuffle GODSENT, Renegades and Virtus.pro, themselves, is surely more valuable than VP’s wins over SK with Fox, Misfits, and the reformed Fnatic. Still, Virtus.pro’s command of Cobblestone still clearly exceeds every other contender and has helped them threaten Astralis’ current world-leading status.

While many attribute Virtus.pro’s long running success and recent uptick in performance to the strength and versatility of their roster, perhaps too little credit has been given to Virtus.pro’s ability to pick up and excel at new maps again and again. While Virtus.pro’s Nuke picks earlier on were probably ill-advised, particularly in the ESL One Cologne semifinals, their performance on the map since the August player break has clearly been superb. Since then, Virtus.pro has won 13 straight matchups on Nuke, which gave them an edge instrumental in overcoming their previous rivals in SK and has helped make them one of the defining teams of this era.

Nuke becoming a part of the functional map pool in the post-player break period of play was largely due to innovations by three specific teams: Virtus.pro, NiP, and Dignitas/North. These three teams, in turn, became the obvious leading figures on the map across the entire scene immediately thereafter, but lackluster performances by both NiP and North recently have only exaggerated Virtus.pro’s stranglehold on the map. However, FaZe has slowly become respectable on the map, themselves, recently winning five of their past six bouts with either Philip “aizy” Aistrup or Joakim “jkaem” Myrbostad in the lineup. But, FaZe is still far from being considered world-beaters on the map, as all of their wins have come from more middling opponents, while their one matchup versus another highly competitive Nuke team, Virtus.pro, ended in defeat.

Despite formerly being a strong map for Virtus.pro, the Polish team, like most of the upper-end of the scene, has moved away from Mirage more recently. Virtus.pro did not pick or play it once in any of their 10 maps at the ELEAGUE Major and they used their second ban to remove the map in the quarterfinals and semifinals. Still, they did find three very solid wins on Mirage at DreamHack Masters Las Vegas, in addition to their earlier wins at WESG. While VP’s temporary hold of Mirage in Vegas highlights the team’s very deep map pool, it seems unlikely that Virtus.pro will continue to hold the map in the souped-up current scene moving forwards.

While FaZe with jkaem struggled at DreamHack Masters on Mirage, winning just one of three matchups on the map on their way to group stage elimination, the previous iteration of the FaZe lineup somewhat stealthily racked up an impressive record on the map over the past 100 days. FaZe Clan played the map four times in best-of-ones across the ELEAGUE Major Main Qualifier, the group stage of the ECS Season 2 finals, and the ELEAGUE Major’s swiss. Of those four games, FaZe won three, with the fourth being a 19-17 loss to SK with Fox. While FaZe tends to favor either Overpass or Nuke first in a best-of series, they did first pick Mirage in the quarterfinals of the major versus SK, to find their only map victory of the series.

Astralis shouldn’t be the world leader on Cache. It’s a map they don’t prefer and hardly play. Regardless, the combination of limited play before the major and the fact that many of the Cache playing teams of the world reformed in the post-major shuffle season means that Astralis technically has to take the crown. G2 only played two Cache games in the past 100 days at the ELEAGUE Major Main Qualifier and the major itself. Mousesports has two wins and one loss on the map over the past 100 days, but all of those came before the team’s recent reshuffling. SK won three of four matchups on the map, but those wins mostly also came before their most recent roster swap. Virtus.pro played Cache five times over the same period but lost four of those matchups. OpTic was 3-1 on Cache, but the Green Wall is disqualified from taking the top spot due to their recent roster swap. Immortals played the map six times but only won twice, with those wins coming from quite unimpressive opponents in Team SoloMid and Vega Squadron. Cloud9 is just 1-2 on the map, and NiP, who was formerly seen as proficient on Cache, has played it just twice over the last 100 days, with one being a highly embarrassing 16-2 loss to Vega Squadron. As competitive play has started to pick up again following the shuffle season, Cache feels very much up for grabs, along with the newest addition to the map pool.

The new updated version of Inferno was first seen in high-level offline play at DreamHack Masters Las Vegas, where it was played just four times. North, OpTic, Astralis, and Gambit each found a win of their own, but calling any of these teams calling them the best already with so little play on the map feels reductive. We still need to see more competition on the map before a world-leader can reasonably be crowned.