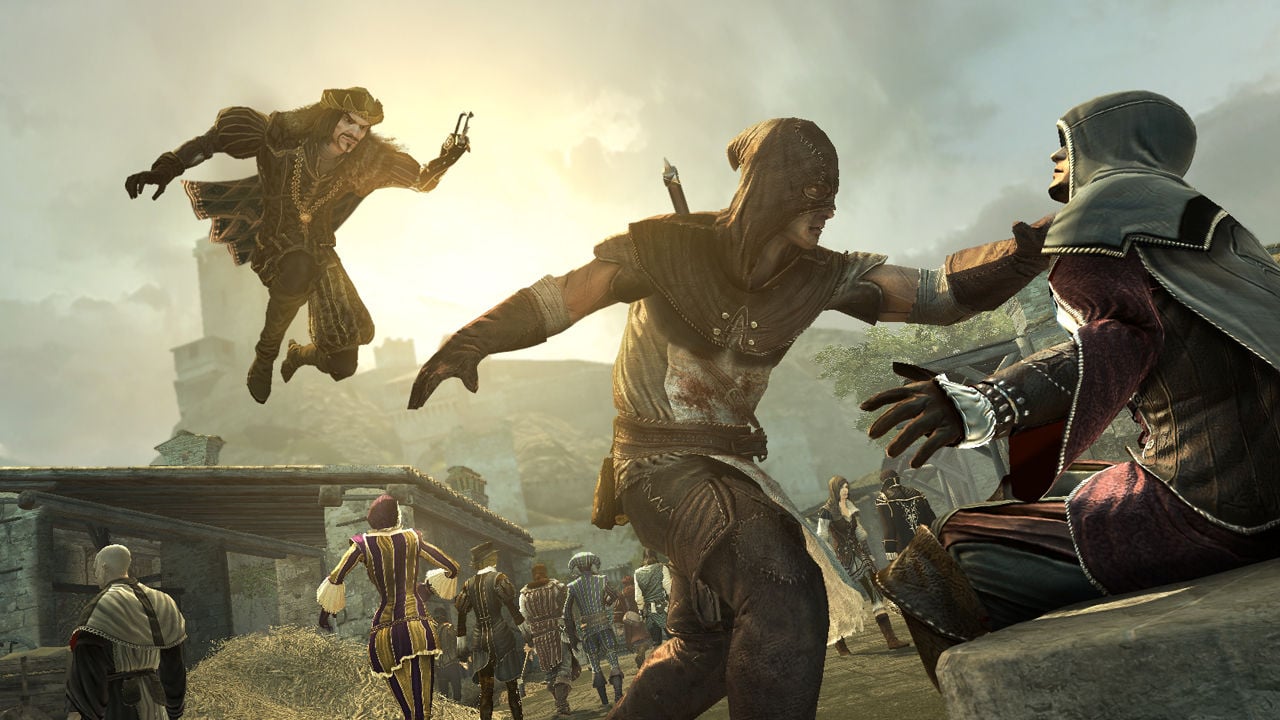 The Assassin’s Creed franchise has evolved and become fresher over time. As a result of its popularity, Ubisoft has connected the series to other franchises, like Watchdogs. Nevertheless, when it comes to choosing which games are better, it’s a real struggle.

Assassin’s Creed has changed genres, the original main plot of Assassin’s vs. Templar was shifted to a side-plot, and the real-world story is still struggling to feel less like a diversion. that doesn’t mean the games released today aren’t enjoyable; they’re just different. Many fans love where the series has gone, while some would rather it have stayed the same, but they are still fun to play through and add a lot more to the game with each installment.

The following rankings are based on which games were the most fun to play, regardless of their genre.

It wasn’t easy for Assassin’s Creed to transition from Altair to Ezio. It was important to find a partner for Altair that would also be recognizable to fans of the first game. Altair already had a love interest from a previous mobile game, but Bloodlines brought Altair a new one, Maria Thorpe.

During Bloodlines, Maria becomes disillusioned with the Templar order losing her husband, Robert de Sable, the first game’s antagonist. Graphics and gameplay are dated today, but the romance is perhaps the second-best of the series, next to Ezio and Cristina Vespucci.

Assassin’s Creed III received so much hype, but there were disagreements about how the series should proceed. Creative director Patrice Desilets wanted Assassin’s Creed to be a trilogy, but the series proved good enough for a franchise. Instead of a satisfying ending, fans got a cliffhanger that would set up more sequels and never saw Desmond rise to his full potential.

On the Assassin’s side, fans met Conner, a new assassin who discovers the order when it’s close to death. Conner has a lot of potential, but he stays arrogant throughout the game, and it’s hard to relate to him when he mainly reacts instead of taking charge. Haytham, his father, would have been a better protagonist and better liked.

In addition, there were many bugs in the game, but it was still incredibly fun. Although you no longer have a guild, many of the mechanics introduced in this game carried over into Black Flag. Building a Homestead and making money from your merchant enterprises should have remained in future games.

The original Assassin’s Creed was extremely controversial. It was a technical feat as one of the first games to allow players to climb anything and use parkour, and even though the story was great, the open world felt fake. There were no rewards for collecting collectibles or doing extra missions, and the people seemed aimless and just reacted to things rather than having a life of their own. In addition to the combat being stale, many players were turned off by the lack of content.

Considering that most of the characters were real and died around the same time as the game indicates, the game’s story felt pretty realistic. Many of the cities were accurately depicted and tested by historians. There were Assassins and Templar in the middle east at this time, and they had issues with each other.

While Ubisoft didn’t offer much in the first Assassin’s Creed, what it did offer was polished and ahead of its time.

Ezio returned for one final installment. It’s hard to say this is an improvement over Assassin’s Creed Brotherhood because it plays like a DLC. There are a lot of things players can do, but nothing is really expanded upon to do more. The game gave Ezio a few new gadgets and a love interest, and it gave fans the closure that Assassin’s Creed III couldn’t.

Players watched the end of Altair’s story at the same time that they saw the end of Ezio’s. It was a great farewell to two beloved characters.

In addition, the player could do much more with their Assassins in the game. In the end, players could use the guild at its peak; the Assassin’s guild would never be more powerful than when Ezio was in charge, and it shows. No other Assassin’s Creed game has made the guild feel as strong as this one.

Players take on the role of the Frye twins as they reestablish the Assassin’s hold on London. Players fight and kill Templar as Jacob Frye, while Evie Frye, players sneak around and try to find out what happened to their father.

In Assassin’s Creed Syndicate, the combat system was significantly improved, grappling hooks were introduced so players could move around the city, and gangs played almost as important a role as they did in Assassin’s Creed Brotherhood. Despite delivering so much of what fans wanted with a compelling story, it was left behind when Ubisoft changed genres.

As players arrived at Assassin’s Creed Unity, it had become clear that the Assassins had gone astray. They were so wrapped up in politics and the dealings of the world that they neglected the innocent. In Assassin’s Creed Rogue, players can take on the role of a rogue Assassin turned Templar, who, by this point, are better to the people than Assassins.

Assassin’s Creed 2 brought in a huge fanbase for Ubisoft. The player would now control Ezio Auditore de Firenze, one of the best video game characters ever created. Learning from the feedback of the original Assassin’s Creed, Ubisoft gave players a reason to interact with the open world. People felt more than just faces. Places felt like they had been lived in, and people seemed more than just faces. The point is not to be thrust into the guild, but to learn how much it helps others and then join it at the end.

Assassin’s Creed 2 takes place during the Italian Renaissance, where great painters like Leonardo De Vinci and Michaelangelo often come to mind, but others may think of the Medici family and their banking empire. In Assassin’s Creed 2, players could make their own city and invest in it. You could earn enough currency to walk around throwing money away repeatedly and still make more than you threw away.

Ubisoft continues to make games based on the Assassin’s Creed universe but only lightly touches on the fight between Assassins and Templar.

In Valhalla, your role is that of a Viking, which has been requested since the second Assassin’s Creed came out, and you want to do your Viking duty of pillaging, killing, and stealing money.

Ubisoft decided not to worry so much about Assassins and Templar in Assassin’s Creed IV: Black Flag, instead focusing on Edward Kenway’s story. You hear about the Assassins and Templar in the game, but they don’t really play a major role until the very end. Until then, you’re just a pirate who wants to plunder, steal, and kill. You are not a good guy or fighting for justice; you are fighting for money.

Assassin’s Creed IV Black Flag allowed you to set up a huge pirate empire, which focuses on ship battling. Since the feedback for the ship battles was so positive, it has been in many games. If they had called it something pirate-related and left out “Assassin’s Creed,” it probably would have fit the game better.

Ubisoft didn’t have to worry about Assassins or Templar in this game because this was its origin. You play as Leonidas of Sparta’s grandchild and embark on a quest so far into fantasy that Assassin’s Creed Odyssey cannot be considered historically accurate other than in its locations.

There’s a lot of fun to be had in this game, and the abilities you earn are very useful. Over time, you probably become as powerful as a foot soldier to a demigod. Without spoiling anything about the story, you choose between Kassandra or Alexios and find out the truth about their family history.

It was still a lot of fun and made you feel unstoppable. There was a perfect balance between Assassin’s Creed and the new identity that Ubisoft was developing. The God battles and Atlantis may seem ridiculous and strange at first, but they’re a lot of fun to play and serve more as a reward for your hard work in the main story.

As a result, Ubisoft stopped making one Assassin’s Creed game per year and began taking feedback and improving it from there. Finally, Ubisoft showed fans where it all began. This game’s main character, Bayek, is one of the top three characters in the Assassin’s Creed franchise, and he embodies everything we want in a protagonist. He’s a protector of the people, a defender of justice, and a blade in the crowd.

Assasins’ Creed Origins is a revenge story that makes you want to kill all members of the Order of the Ancients, which are the ancestors of the Templar. The game also features some historical figures, and Bayek’s wife is actually one of the Assassins shown in Altair’s master assassin armor room.

At the end of the game and the DLC, you have started the assassin’s guild called Hidden Ones at this point. We didn’t get a chance to learn more about Bayek, but we’d love to see him return and get a proper ending.

Assassin’s Creed Brotherhood was the result of Ubisoft’s best efforts. During the game, players could take over Rome, build huge guild houses for their Assassins, train and develop their brotherhood, and make the guild extremely wealthy. You could use your Assassins whenever you wanted, and it felt like losing a friend when an assassin died.

Assassin’s Creed Brotherhood made Ezio the beloved character he is today and featured Cesare Borgia, one of the best villains ever written for gaming. The plot and story felt like they were from a movie, and the rivalry between these two geniuses of war was unparalleled. Not to mention the surprising cliffhanger ending that filled in many plot holes.

The gameplay alone would make this game number one, but ultimately, the side missions with Cristina stayed with players for years. Cristiana Vespucci appeared briefly in Assassin’s Creed 2, and many players wondered what happened to her. Assassin’s Creed Brotherhood explained the love between Ezio and her in side missions, and the ending is sure to bring you to tears.