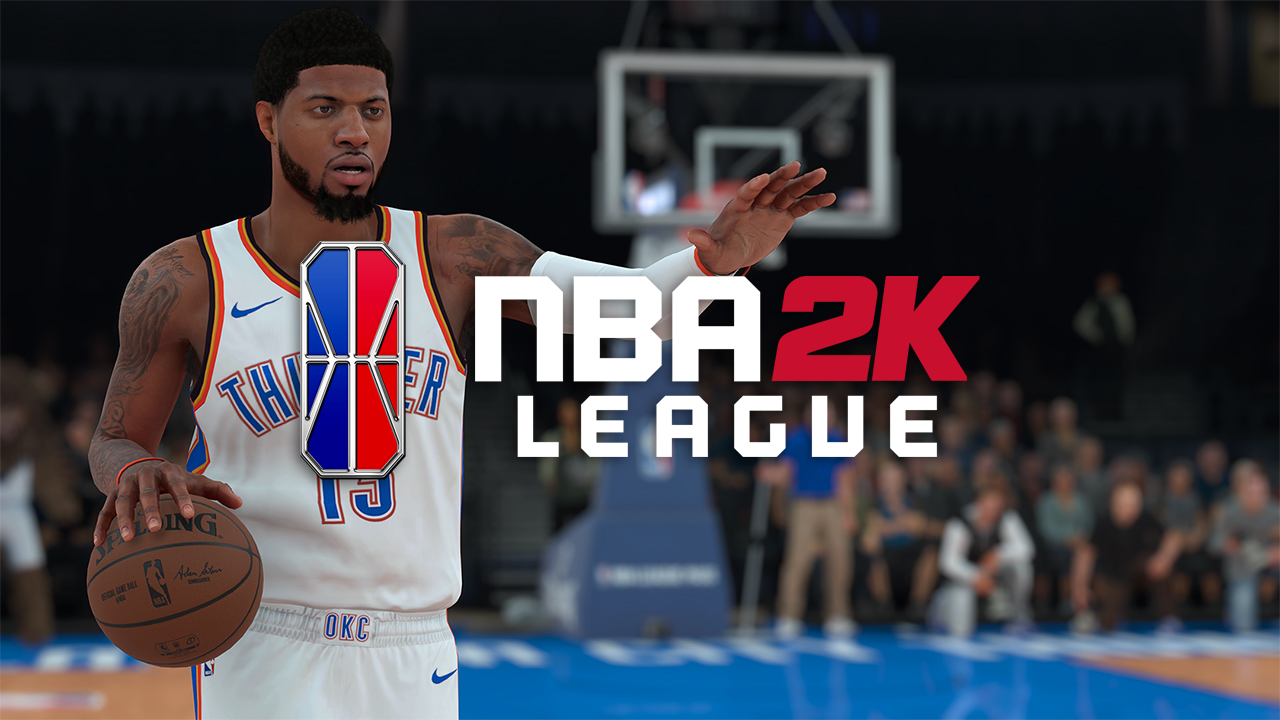 Screengrab and logo via NBA | Remix by Aaron Mickunas

The NBA’s new esports league is already off to a rocky start.

Numerous players who tried out for the league say the selection process was rigged, leading to a storm of outrage and even death threats directed at NBA staffers.

The league, officially called the NBA 2K League, boasted the first truly open tryout system in any major esport league, with about 72,000 applications taking their shot at becoming professional gamers. The NBA even hosted a draft combine for the new league, similar to the NBA’s own Draft Combine, where players that met certain criteria could show off their performance against other would-be pros before being evaluated to move onto the next step.

Just a few days after the conclusion of February’s combine, emails were sent out to the 250 combine players that would move onto the next stage of evaluation. That’s when the controversy began.

Soon, popular players and streamers who didn’t make the cut uploaded videos claiming the league and its selection process were rigged. They cited screenshots from another player’s direct messages on Twitter with Cavs Legion general manager Anthony Muraco (Cavs Legion is the Cleveland Cavaliers’ team in the league).

The messages between Muraco and league hopeful “MrStylez_” show the player telling Muraco that he didn’t make the cut, only to be comforted by Muraco, who said that he wouldn’t let the player “get snubbed like that.” 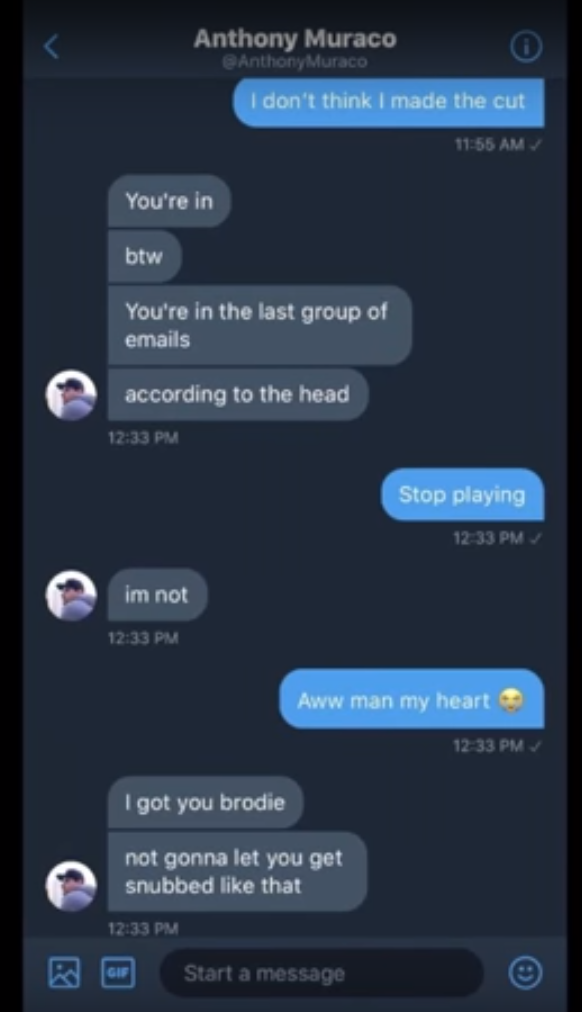 MrStylez_ later received an email saying that he had made it into the league, hours after the rest of the 250 received their approvals.

Using the leaked direct messages as their rallying banner, scorned players have been claiming that their actual performance and skill didn’t matter. They say that the league knew who it wanted to select the entire time while the draft and combine were merely faked, rigged, or made to push a hidden agenda.

One player and popular streamer by the name of “White Chocolate” has been a primary advocate for this theory. The video he uploaded to his own YouTube channel highlighting each piece of evidence he considers proof, such as audio submissions and direct stat comparisons, has racked up over 20,000 views and countless mentions from other players on Twitter.

“In my opinion, the whole process has been rigged up to this point,” White Chocolate told Dot Esports. “I know people, I’ve got friends that took semesters off of college and people that quit their jobs in order to pursue this, and for there to not be any type of real chance, because [the NBA] is just going to pick who they want to pick, is crazy.”

Other players have even taken to slinging threats and insults at Muraco, the Cavs Legion team, and even staff from teams not involved in this particular incident.

While the Cavs Legion declined to comment on the story, a representative did confirm that Muraco “has received multiple death threats.”

White Chocolate, for his part, says these threats are unfair, and that they ruin what his movement is supposed to stand for.

Grant Paranjape, director of esports for Monumental Sports Entertainment, the company that runs the Washington Wizards NBA 2K League team, has been caught in the crossfire of insults and threats. He thinks the conspiracy theory is completely unfounded.

“There really is nothing to it,” Paranjape told Dot Esports. “None of the managers had any power to put anyone into the 250 pool, it’s purely just a mix-up [with Stylez]. It just got conspiracy-theoried to all corners of the earth.”

The NBA backed up that line with a nearly identical stance, in an attempt to put the rumors to bed.

“Teams have absolutely no input on which players made the top 250,” an NBA spokesperson told Dot Esports. “The comprehensive process was led strictly by officials from 2K, the NBA 2K League, and included Genji Esports, a third-party analytics firm.”

Paranjape said he feels sorry for the rejected tryout participants—that it probably feels like getting rejected from your dream college—but that the reaction to the late email was blown out of proportion.

“Whenever you have angry and upset people that didn’t make the cut, they look for reasons to explain it, rather than that they just weren’t one of the best 250 players, and that’s all that happened,” Paranjape said.

The aggrieved players say that Muraco’s language in his direct message with MrStylez_ implied that he, a team manager, had control over the drafting process. Also, several audio applications from would-be players hadn’t once been listened to on their Soundcloud profiles, which was supposed to be a key part of the application process, indicating they weren’t given a completely fair chance.

“There’s a lot of fed up people,” White Chocolate said. “There’s a lot of people who really felt like they wasted a lot of time and effort, and time is something that you can’t get back. If there’s a way that people feel that they can take [the NBA] to court with a lawsuit, then I believe there will be some class action suits.”

White Chocolate said that the fact that players weren’t able to see a leaderboard of the applicants to directly compare stats meant that the league was trying to hide something. He compared his own stats to players that made the cut in his video, using the game’s stat dashboard to prove his point.

The couple of players who had made it through to the top 250 that he showed had worse point averages as well as percentage of shots made from the field. He also said in his video that both the 2K16 and 2K17 games featured some sort of leaderboard, which was his further evidence that this 2K18 league was meant to hide something.

Paranjape dismissed these claims, too.

“I think people misinterpreted the process for the past two months,” he said. “Myself, [Muraco], other directors—we’ve been very involved in the community, watching their streams, getting to know the guys, but that’s where it stopped. It was trying to understand their personalities and how they might fit into a team someday if they made it. At no point did I ever have a draft board in my office.”

As for the Soundcloud applications, Paranjape had a simple explanation. He noted that the NBA didn’t even consider any players that didn’t perform as well as the top 1,000 applicants, so there’s a good chance their audio submissions weren’t glanced at.

Not only that, but other factors went into the process, too, Paranjape said, such as marketability, or how well players present themselves on social media. If applicants didn’t have a clean and professional social presence, they could be immediately dismissed. Both Paranjape and the NBA claim that the game’s stats dashboard only shows top-level stats, and that there was a much more complex algorithm at work.

“The players were selected based on a range of factors, including performance from the combine and an online application detailing their knowledge of the game of basketball,” the NBA spokesperson said. “For example, running a zone defense and executing a pick-and-roll, as well as their understanding of the NBA 2K video game and reasons for why they want to play in the league.”

Still, the movement started by these rejected players is gaining traction. Yesterday, some of them reached out to esports attorneys Bryce Blum and Ryan Morrison. Morrison, however, doesn’t seem to think the players have a strong case.

“Based on what I’ve seen, there’s not much of an actual case to be made here legally,” Morrison told Dot Esports. “What is the issue, instead, is that these teams hired inexperienced and unprofessional managers who were spreading wild untruths. The dangerous part of that is those managers have authority, legally, to bind their teams to promises and decisions.”

Muraco has since issued a formal apology for misleading MrStylez_ and other players with his language in direct messages. But that’s only kicked off another wave of insults and threats directed at the Cavs and other teams involved in the league.

The next step of the application process includes the NBA interviewing players in the pool of 250 and narrowing it down to 102. After that the draft will begin, and six players will be placed onto each of the 17 teams included in the inaugural season.

Update March 6 7pm ET: NBA 2K League managing director Brendan Donohue tweeted out screengrabs of conversations with Anthony Muraco and Grant Paranjape to provide clarity to the controversy surrounding Muraco’s direct messages, as well as an open letter to the 2K community further explaining the situation and how players were chosen for the 250 pool.