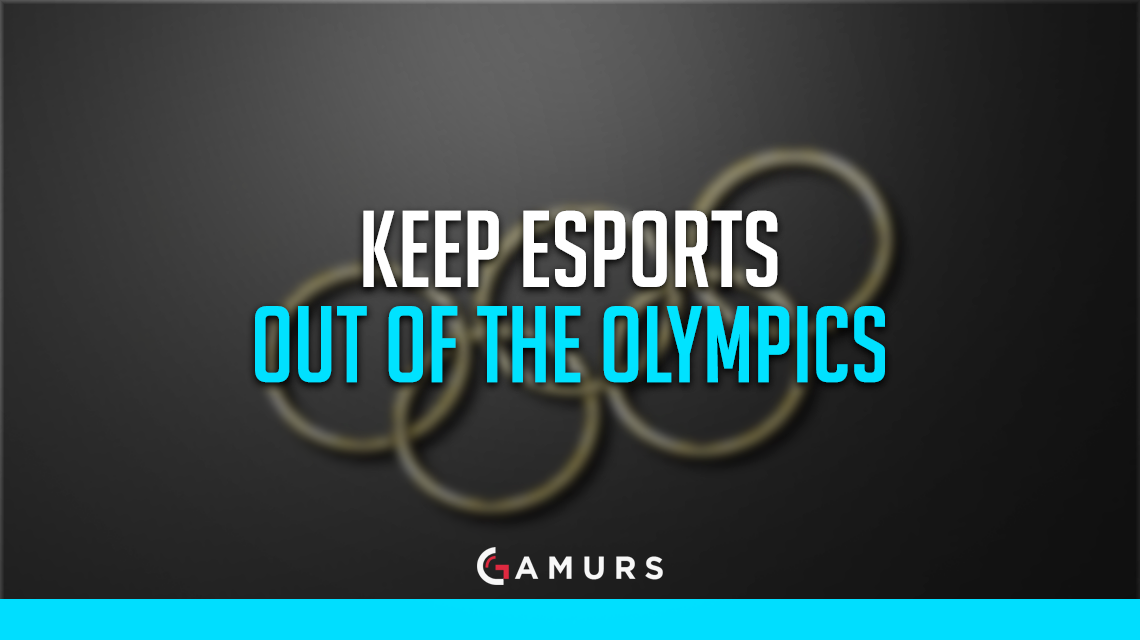 *DISCLAIMER: This is an opinion piece*

The Olympics, in ancient times and since 1896, have stood as the absolute pinnacle of sports achievements. Every kid who has ever been on a little league team or played a sport has imagined standing on that podium while their national anthem plays and having that brilliant gold medal placed around their neck. Now, with the recent news of LA pledging support to adding esports in the Olympics for 2024. that dream could be extended to thousands of kids gaming at home.

But, that dream is wrong.

I’m not here to argue the merits of whether esports are real sports or not, but the bottom line is that they don’t fit in. The likes of extraordinary gamers, such as Lee “Faker” Sang-hyeok and Seth “Scump” Abner, belong at their respective events and not next to Michael Phelps or Usain Bolt.

One core aspect of that is the actual Olympic motto, “Citius, Altius, Fortius.” In Latin, that translates to “Faster, Higher, Stronger.” I’m not here to say that video games are easy to play, because they aren’t, and esports are some of the most competitive events out there. At the end of the day, though, a competitive League or CoD player isn’t going faster, higher, or stronger.

This isn’t a knock, by any means, on esports, the fans, or the players. It just is the fact that they don’t fit in with the Olympics. For a simple comparison, look at chess; it’s not exactly like esports, but it’s relatively similar. There are players and there is a game, and the players work as hard as they can to be the best at that game. Chess has exactly what esports should be striving towards, its own inclusive chess olympiad. They aren’t trying to be compared to the top athletes of the world, instead, they compete within their own huge events.

On top of the basic issues of how esports don’t fit in the Olympics, there’s also a much simpler reason for exclusion: the logistics. One of my colleagues covered the various options here and he makes some good points. On the other hand, though, the only possible scenario I could see is video games as a broad category, like track, and the individual esports with countries awarded medals.

However, the problem with this is massive. One of the peculiarities of esports is that they are constantly changing in a way other sports really aren’t. You don’t see updates to Track and Field or Swimming released every two weeks by developers. You also don’t see new “sports” burst onto the scene every few months. As difficult as it is to add and drop events in the Olympics, it wouldn’t logistically work to add new games, like Overwatch, and take out previous titles, such as Call of Duty: Advanced Warfare, for every olympiad.

Another issue to think about is the individual games themselves. Things like soccer aren’t based on publishers, who turn a profit to be the sport. Esports are based on publishers, like Activision and Blizzard, who make a profit off these games. Adding them in the Olympics would logistically be a nightmare for the spirit of the games, in relation to companies who fund esports and the games solely to turn a profit.

I know the response to this; governing bodies like FIFA make tons of money, but the difference is to play soccer, all I need is a ball. To play esports, I need a console or computer first, then I have to pay a publisher for a game. It’s a totally different system and schematic from that of traditional sports.

I think some of the reason for the desire of inclusion is that this would effectively legitimize esports. Anyone could tell their family that they’re not playing CoD for fun, but that they’re playing it to practice for the Olympics. Traditional sports are not like that; not many families would argue with their kids for being outside and playing football too much.

The Olympics though are not the way to go about this paradigm shift. This shift will only happen with time and with esports becoming more integrated into our society. I sincerely think that shift will eventually happen; eventually esports won’t be looked down upon or ridiculed in society. But thinking that esports being added into the Olympics won’t make esports a running joke, more a gag, is pretty naive.

As much as I love watching and playing esports, at the end of the day, the Olympics are not a natural place for them and wasting time and resources for inclusion isn’t optimal for anyone. We need to focus on a fun, non-profit, world championship style competition that can bring us all together and have its own Olympic spirit. None of this is to say esports isn’t a great competition and a lot of work, but there are better places for esports and we should focus on finding those.

What are your thoughts on esports inclusion in the Olympics? Let us know by commenting below or tweeting us @GAMURScom.

Max Littman is a writer for GAMURS and can be reached on Twitter at @Gamurs_Max.