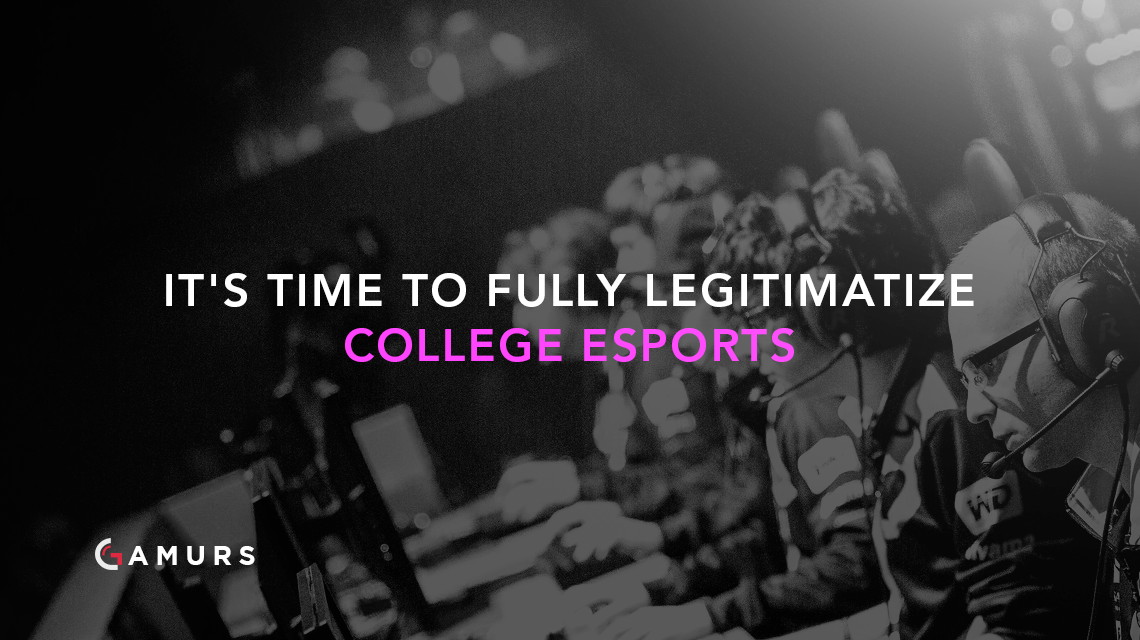 As a follower of the acclaimed sports business journalist Darren Rovell, I woke up this morning to see this graphic:

The # of schools with esports gamer scholarships has risen to 15, according to @mannyanekal pic.twitter.com/obY1N4rCmx

Over the past few years, we’ve seen how far the esports industry has come in terms of legitimatizing its product. The United States gives out visas to esport athletes, much like their traditional athlete counterparts. Counter-Strike, Heroes of the Storm and Halo have all appeared on ESPN and TBS alongside NBA and NFL coverage.

And now colleges, from D-I powerhouses to schools that an average sports fan has never heard of (go Tiffin Dragons), are all entering the esport market with collegiate competitions. Smaller colleges are offering scholarships up to the same amount given to athletes who compete in traditional sports, which could open the door for larger schools to follow suit.

With so many leagues already in place to give those schools a home, such as AVGL, NCESPA and Tespa, it’s time for an NCAA-like association to form and provide a strong nationwide platform where schools and athletes can securely and legitimately compete.

An emphasis should be placed on “NCAA-like,” because throwing the NCAA into esports would be a horrible decision.

I am not afraid to disclaim that I completely oppose the NCAA. The fact that a governing body, coaches and schools make millions of advertising dollars on athletic competitions, and have none of that money (legally) go back to the athletes competing, is a complete farce.

Giving the trade-off of a free education is also ridiculous, as the rise of “paper classes” at some schools, along with the removal of scholarships upon career-ending injury, also undervalues a quality education.

While the PAC-12 has begun hosting and broadcasting esport tournaments, this could lead to a dangerous situation in which the NCAA can barge into other conferences and start regulating esports without any regard to esport student-athletes.

So, if we rule out the NCAA, what should the answer be for colleges that are looking to get into esports and are in need of a home?

To start, other games like Counter-Strike, SMITE, Halo or any games in the Activision Blizzard esport conglomorate, can take a page from League of Legends and uLoL. While combining both student and college run programs, uLoL gives a national stage to some of the best young talent, and has seen players like Adrian “Adrian” Ma develop into professional stars.

However, it is not enough to give each esport its own league, because it would be like a school having an NCAA basketball team, while having an NAIA football team and an NJCAA field hockey team. Having multiple governing bodies for esports means more paperwork for programs, the potential for a juggling act of staying within multiple sets of regulations, and would overall drive away schools wanting to get involved in collegiate esports.

Therefore, a single governing body that extends to games like League of Legends, CS:GO and Hearthstone gives a willing school the legitimate backbone to field esports programs and schedule games. It also allows a college that falls under this association more of an opportunity to court esports athletes to apply to its school, and gives fans a chance to support their alma mater in multiple esports.

Again, this is sort of what the NCAA already brings to traditional sports, but unlike that association, there should be incentives placed for teams who finish well in their conference or at a national tournament. Along with giving them a free ride for their education, giving athletes cash bonuses for winning tournaments, finishing at a certain place in-conference or even winning games would help them survive in college, where unforseen expenses tend to creep up. This esports governing body can also go so far as to give the players a cut of any advertising revenue made from broadcasted contests.

Treating athletes with more respect to their studies would also be an important factor, as giving crucial time to both practice and academics is a struggle many student-athletes currently face. Most student-athletes have to live two lives at a college, both as a student and as an athlete, so putting regulations in place to help them keep up with legit, non “paper-class” schoolwork along with their competitions would be vital. I’d go as far as to have an esports student-athlete union to allow for fair conversations between schools, the governing body and student-athletes about payment, scheduling and other factors that affect all parties.

Furthermore, bringing esports to college is the easiest way to allow equal opportunity for all students to compete, regardless of gender or any other factor that limits college athletic programs and what they can offer. A school-run esports program could allow for teams in which both men and women can compete together for their school, which would be a huge win for gender equality. On the flip-side, fielding seperate men’s and women’s programs in esports can help drive a rise in female competitors, something that esports unfortunately lacks as it rapidly grows.

There are other factors that need a discussion if a general esports association is formed, but this at least starts the conversation as to where college esports can move forward. I also don’t want to rule out Tespa or the other current esport associations as the main governing body, however, having these collegiate esport competitions spread across multiple organizations can overwhelm a school trying to get involved in esports.

If you are reading this as a student, or college esports fan, or even as a college administrator, you are probably wondering how you can help kickstart this movement toward a larger college esports ecosystem.

To that, I say that the best action is to continue this conversation. Talk to athletic departments, school club organizers and even college administration about starting esports teams on campus, as well as giving these players scholarships. Start coming up with plans to bring in esports teams to your college or university, and actively participate in keeping those teams afloat. Most of all, support your school’s current esports or gaming clubs by donating your time or money to these organizations.

Getting more schools to talk about a general collegiate esports association could allow for a bigger and better national stage for collegiate esports, and put this new association alongside the NCAA when considering how much it advertises and makes money for a college or university. And maybe, in a perfect world, this governing body could force the NCAA to act better towards its student-athletes.

Bringing esports to collegiate leagues gives the opportunity for bright-minded individuals to get a secondary education for free, while also allowing them to advance further in their esports career and potentially giving them a paying job while in school.

Needless to say, it’s time to make this a legitimate part of American colleges and universities.

What do you think the next steps should be for collegiate esports?

Let us know in the comments below and for all your esports updates, make sure you are following us on Twitter, @GAMURScom.

James Mattone is a journalist for GAMURS and can be contacted on Twitter –@TheJamesMattone.