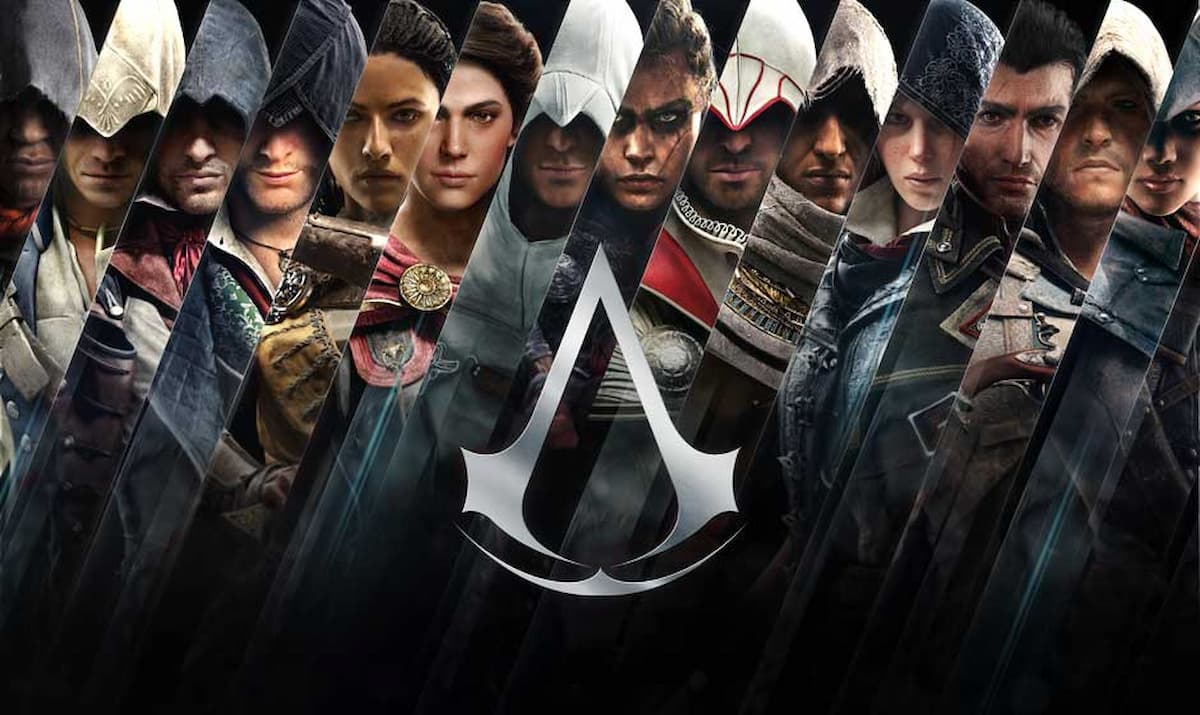 Assassin’s Creed tells the story of a centuries-long rivalry between two factions. Though the names of those two factions, Assassins and Templars, may change over time and the morales of each are corrupted once or twice, the fundamental reason for their disagreement remains the same.

Though both want to do the same thing, they disagree on how to do it.

A peaceful world and the advancement of humanity are imperative, but should they be attained through freedom or in chains?

Assassin’s Creed takes place both in the past and in the present, which means there is also an element of present-day story building in most Assassin’s Creed games. You can play the games in the present day’s chronological order by playing them in order of release. If you want to play them to find out the main story, then you need to play the games in a particular order if you wish to see the story of Assassins vs. Templar from beginning to end.

The following sets out how each game is played and how the rivalry develops over time.

Assassin’s Creed: Odyssey begins with the grandchild of Leonidus, the Spartan king and leader of the great “300.” While uncovering a secret cult that controls everything from the shadows, players can choose to play as a male or female grandchild.

By seeking revenge against them for ruining their childhood, killing those close to them, and destroying their family, the main character will fight against this cult, known as the Order of the Ancients. As the ancestors of the Templars, the cult is already known for its devious ways, but the grandchild of Leonidus is not like other enemies they’ve faced.

Assassin’s Creed Origins takes place hundreds of years later. Medjay Bayek of Sewa is sworn to protect the people, but his life changes when the Order of the Ancients makes him kill his only son. Bayek seeks revenge against the order, joining a grand campaign to stop them once and for all.

At the same time, he realizes the world needs an organization that keeps the peace from the shadows and protects freedom. This is the founding of The Hidden Ones, the Ancestors of the Assassins, and shows how long the blood rivalry goes back.

Eivor will not fight for the creed, but for his own interests, which also coincides with the Hidden Ones’ goals.

We won’t give away the plot, but it doesn’t seem like it’s really continuing the story, but explaining some details about what the groups were doing at this time.

In Assassin’s Creed: Altair’s Chronicles, players assume the role of Altair, a highly respected member of the order and future mentor. The Templars remain the Templars, and the Assassins remain the Assassins, but their war has not changed much. The game tells the story of Altair’s attempt to protect his first love, Adha, who is on the run from both organizations.

Assassin’s Creed is the first game in the series and has the difficult task of explaining the whole story without being too boring, but it succeeds. Altair is the main character, and he has been shamed for violating the creed.

After becoming a novice, he’s tasked with regaining his honor and rank.

For Altair to regain his previous rank, he must kill nine Templar leaders who harm the people of the Middle East. This will cause Altair to uncover a great conspiracy within his ranks, changing the leadership forever. The game shows why the Assassins switch from being in fortresses to living in hiding to serve the light.

Assassin’s Creed Bloodlines is a continuation of Altair’s story, now as a mentor of the order. The game explains how Altair has children and continues his bloodline to eventually become Ezio. The game has a great love story and gameplay similar to Assassin’s Creed. The best part of this game is it brings back a minor character to be Altair’s future wife and masterfully explains why they get together.

Assassin’s Creed II introduces Ezio Auditore, one of the most well-liked assassins in the series. Since his father never explained to Ezio anything about his birth into the Brotherhood of Assassins, he has no idea he is in the middle of a war. Ezio deals with the loss of his siblings and father to the Templar order and begins his journey to becoming one of the members of the order.

By Assassin’s Creed Brotherhood, Ezio has become a Master Assassin but has not paid much attention to the Templars and their growing power. The son of the Pope and leader of the Templar, Cesare Borgia, takes advantage of this and kills Ezio’s allies and uncle in his home. As Ezio escapes the battlefield, he heads to Rome to meet with the other assassins. In Rome, Ezio built the Italian Brotherhood to greater heights than has been seen in centuries, and he makes it the envy of all the other Assassin branches.

Rome’s Assassin Brotherhood fights the Templar directly as he seeks revenge for his uncle and freedom for the Italians.

Altair would be proud to see Ezio become a mentor of the brotherhood as he ages. It is most important to him that he learns about his place in the war from Altair, the man who knows it best. Altair has left Ezio keys and messages so he can make the right choices in his life. Assassin’s Creed Revelations is a farewell to Ezio and Altair but also a testament to how powerful he has made the Assassin brotherhood by this point.

They weren’t great games in terms of gameplay on their own, but they show how far the Assassin and Templar war has come.

We come across Edward Kenway, a pirate during the golden age of piracy, hundreds of years later in Assassin’s Creed IV Black Flag. It was a popular entry into the series because of the ship combat, but the Assassins vs. Templars war was more of a side story. They learn a lot about what they’re both up to but through the eyes of someone who doesn’t want to take part in the war. Edward would eventually join the Assassins, but he didn’t make the same impact as other Assassin main characters.

Assassin’s Creed: Freedom Cry depicts what Adewale did after Edward left piracy. When Adewale is shipwrecked in Haiti, he liberates enslaved people and becomes one of the most revered Assassins. The story follows the fight between the Assassins and the Templars, but Adewale develops into a hero with pure convictions.

In Assassin’s Creed Rogue, Edward Kenway’s children are adults when the game takes place. A former assassin named Shay Cormac joins the Templars after the Assassins have lost their way by this point. Now, the Assassins only care about the greater good, not individual people, so they don’t mind killing innocents to achieve their goals.

Conner rebuilds the Brotherhood’s pieces, but it is an informal organization of misfits rather than a real Brotherhood. To take control of the Americas, Conner leads the new Assassins against Haytham and his Templar, during the American Revolution.

The protagonist is Aveline, a young woman in New Orleans fighting against the Templars in Assassin’s Creed Liberation. It focuses on social stealth and allows the main character to switch outfits to blend in or fight better. Conner also makes an appearance in the game, which is a fun way to show how it relates to the situation against the Templar in the north. Conner is not yet an ultra-capable Assassin like Aveline but they work together for a limited time to fight the Templar.

Assassin’s Creed Unity is set directly after Assassin’s Creed Rogue. Arno, a young boy, finds his dead father on the ground and is taken in by a friend of the family. As a young man, Arno earns his keep and grows up strong and rash. When Arno becomes an Assassin, he fights the Templars, who also happen to be the family that took him in. Once again, the Assassins have lost their way, and Arno takes it upon himself to protect the people and the love of his life during the French Revolution.

Hundreds of years later, an assassin named Arbaaz is distracted by a princess who happens to be his lover. The Assassin’s headquarters are attacked during that time, and he has to save his mentor and friend, who is among the kidnapped Assassins. The Templar are behind this, as they always are, and this is another short story with the same gameplay as Assassin’s Creed Chronicles: China.

Assassin’s Creed: Syndicate takes place in London, where the Assassins have lost a lot of their power. The player controls two Assassins, Jacob and Evie Frye, who want to avenge their father’s death and restore the Assassins’ rule over London. This major entry in the series is closest to the present day. The game introduces a new faction, the Rooks, who help the Assassins on their missions, but we have yet to see what major changes that may bring.

The closest game to the present day is Assassin’s Creed Chronicles: Russia, a minor entry in the series that uses the same gameplay as the other two games in the Assassin’s Creed Chronicles series. During the October Revolution, players assume the role of Nikolai, who contemplates retiring from the Assassins. As he watches the Templar assassinate the Tsar, he changes his mind and travels back to the Assassins’ headquarters with the Tsar’s daughter. While the game is very short, it does demonstrate how the Templars infiltrated the Red Army in Russia.