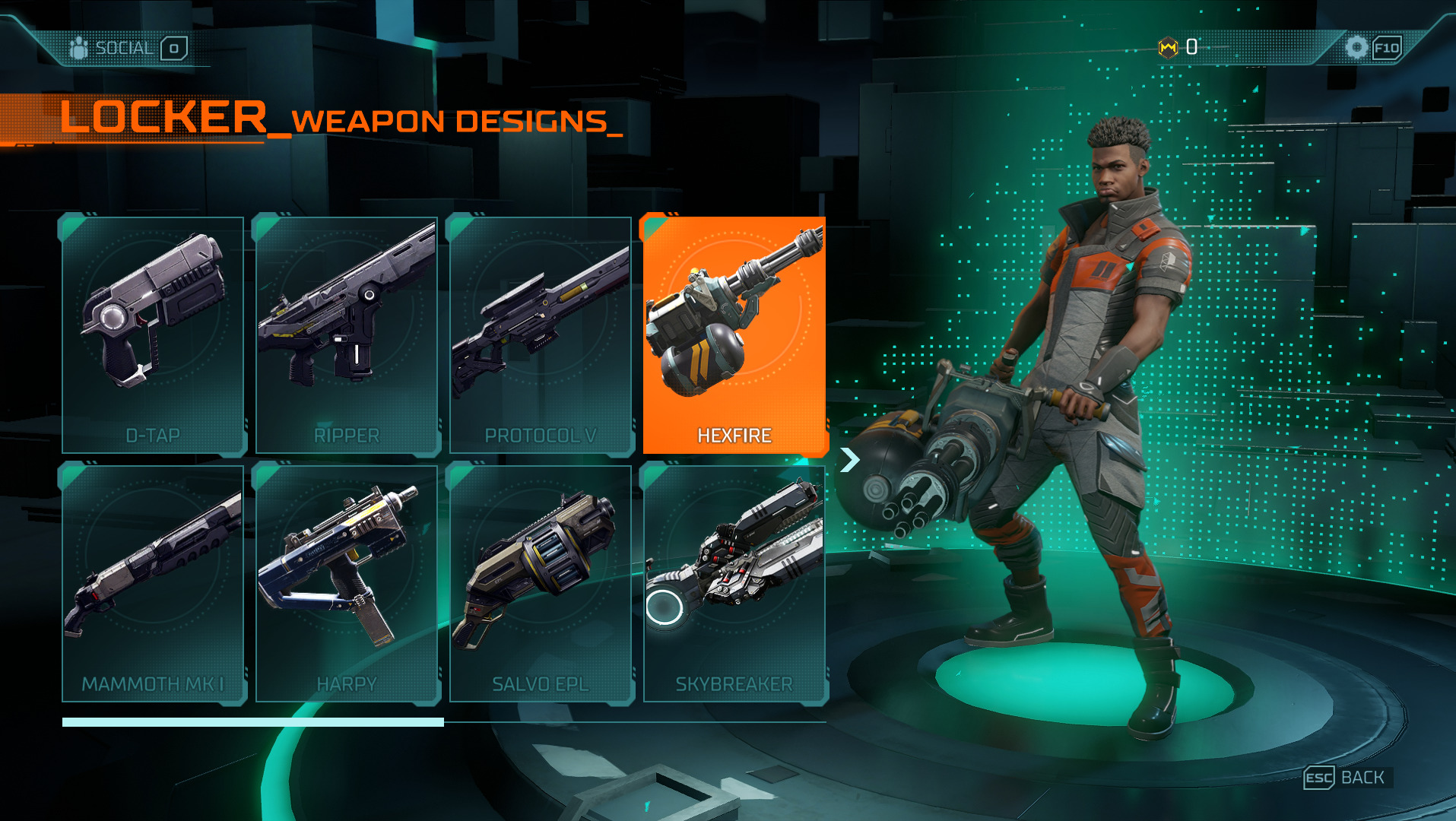 Hyper Scape takes more of an arena shooter style approach to its gameplay. Jump pads and low gravity aren’t the only unique additions to the game. Players are also offered the option to use a variety of weapons and abilities to fight and survive.

The game has transitioned into open beta, allowing users from all over the world to play the game. Here are the guns that are available in Hyper Scape, as well as a description of how they should be used.

This pump-action shotgun is the perfect tool for breaching buildings and other close-range engagements. Like shotguns in most games, the damage is highest at the center of the shot. At level one, the gun carries six bullets in its magazine. But the first three gun upgrades are going to give you an extra bullet, each taking the mag size to nine. The final upgrade will increase its damage, making the Mammoth a one-shot headshot on targets without an Armor upgrade.

The Riot One is the game’s most traditional pistol. This heavy pistol is going to deal some damage if the user is precise. The gun can be used at any range but is most effective in short to medium fights. While it’s powerful at its base level, upgrading this weapon is only going to make it stronger and open up new opportunities to use it. The weapon has no mag size upgrade, but the six bullets it holds should be more than enough to take out multiple enemies when upgraded to the maximum.

One of the most unique weapons in any popular battle royale title, the D-Tap targeting pistol is going to make aiming easy by having the bullets find the enemy for you as long as they’re within your ADS vision. While this may seem like it could be too overpowered, the bullets don’t do the most damage even when fully upgraded. The first three upgrades will see the magazine size increase from 15 to 23 and the final upgrade will boost its damage. This pistol is a great early pick-up when you have the opportunity to take down unarmed enemies or unsuspecting players. But as the game goes on, you’re probably going to want to swap it out for something with some extra power.

This gun is described as a single-shot energy cannon—and that’s most accurate. This gun is perfect for taking out groups of enemies who are bunched together inside a building or on a roof. The weapon fires an orb that will create an area of effect around itself, damaging nearby enemies. Every upgrade for this weapon is going to increase its damage. While it’s strong, the Skybreaker only has specific situations in which it can be useful. It isn’t going to be a weapon that’s used in pursuit of an enemy or during a high-paced roof-jumping firefight.

Something that can be found in almost every battle royale title is a sort of grenade launcher—and Hyper Scape is no exception. The Salvo EPL, much like the Skybreaker, is only going to be effective in specific situations. The explosives do great damage. But since they must roll to their target or hit them on impact, it’s not something that can be used a whole lot, especially with the current playstyle encouraging players to stay on the move instead of bunkering down. The first three upgrades are going to increase the Salvo EPL’s mag size and the final upgrade is going to increase the mag size again, as well as its damage.

The Plasma Blast Launcher is the best alternative to the two weapons mentioned above. This launcher offers the same damage as the Salvo but shoots perfectly straight. This opens up many situations in which it can be used. The first three upgrades to the Komodo increase its mag size and the final upgrade increases both that and its damage. We recommend taking the Komodo over the Salvo nine times out of 10.

As the only sniper rifle available in the game right now, the Protocol V doesn’t disappoint. This weapon is well balanced. Although it’s not a one-shot in its base form, once it’s fully upgraded, the weapon can take out enemies with a single round to the head. There’s no bullet drop on this rifle, so it’s perfect for medium to long-range fights. Players will often pair the Protocol with a different weapon that’s more suitable for close-range engagements. But as of now, there’s no better weapon to take out enemies at a distance than the Protocol V.

Probably the gun players will use most commonly, the Hexfire is a Gatling gun with an extreme mag size. The weapon is surprisingly accurate, but a downside is its bullet damage. Even when fully upgraded, it isn’t the strongest weapon. But its massive mag size and the speed at which it fires makes this a great weapon to use in your battle for first place.

Another weapon that’s going to greatly assist in taking out enemies at close range, the Harpy rapid-fire SMG is perfect for getting those early kills while opponents are looting. Its firing speed is unmatched by any other weapon in the game, but its biggest flaw is its lack of accuracy. You’re never going to want to engage enemies at range with this weapon.

The Ripper is going to feel the most familiar to players of other first-person battle royales. This fully-automatic assault rifle plays just as you’d expect. It’s perfect for close and mid-range opponents. While there’s some recoil, the weapon can still be used at range if it’s tap-fired instead of held down. The first three upgrades are going to increase the Ripper’s mag size and the final upgrade will do that and boost its damage. If you’re a beginner in Hyper Scape, this is the perfect gun for you to find and use as you improve in the game.