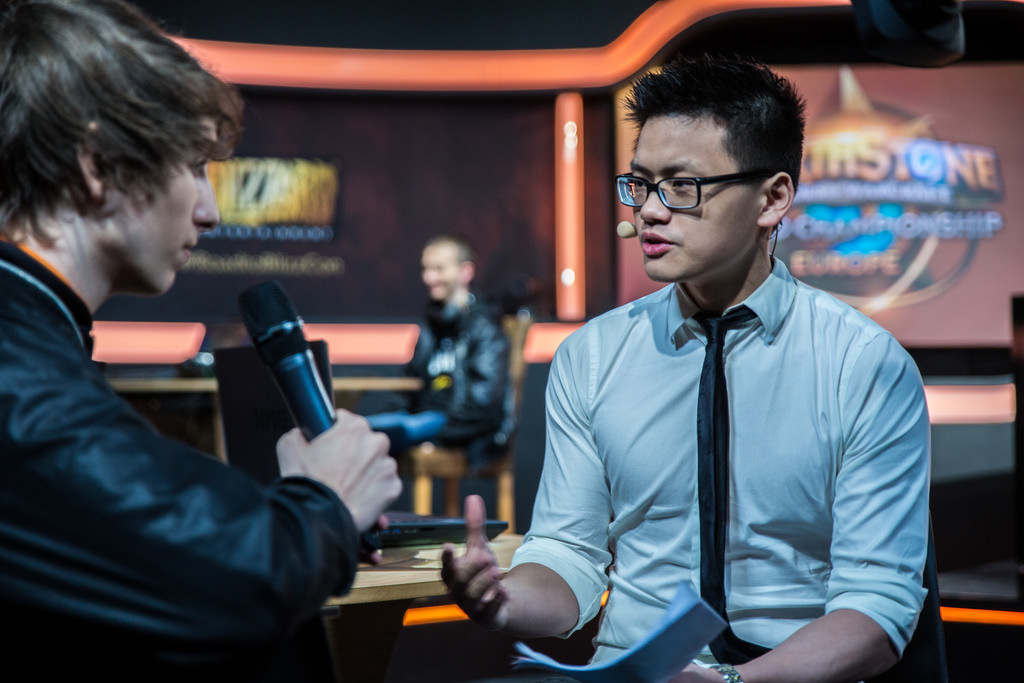 Let’s make one thing clear. I love Dan “Frodan” Chou. He’s probably my favorite commentator in all of Hearthstone. Whether he’s playing table tennis or going against Seltzer in a show match with the literal worst deck ever, he always makes the broadcast so much better.

That being said, I have an issue with him—a commentator and manager, not a pro—being one of the invited players at last weekend’s SeatStory Cup.

This isn’t necessarily Frodan’s fault. He was asked to play by TaKe, and they try to keep the SeatStory series as a more laid-back tournament environment than, say, ESL Katowice.  There’s nothing inherently wrong with having a fan-favorite play some matches. It’s their tournament, and they can host who they want.

Frodan was the weekend’s only obvious “joke entry.” He was put in a group with solid professionals Jakub “Lothar” Szygulski, George “Hyped” Maganzini, and Zalae, and was quickly bounced in the first round, going 1-6. For the rest of the tournament he served as a play-by-play guy, essentially the role he always has in the world of Hearthstone. The other 31 competitors continued unabated, and eventually Jon “Orange” Westberg was crowned with the $10,000 first place prize.

But in an era where Blizzard is urging Hearthstone to move towards a solid 50/50 split between invited and qualified players, it seems odd, exclusionary, and a little anti-competitive to only feature three players from open qualification. It’s even more troubling when one of those other 29 invitations is used as a joke to pull in some extra viewers. SeatStory isn’t the most serious of tournaments—last time it had StarCraft players and Artosis fill out titsheir brackets—but it’s still handing out a solid $16,000 in prize money. That makes SeatStory one of the biggest Hearthstone weekends of the year, whether it likes it or not.

Time and time again we’ve seen guys from the open qualifiers make it into the finals of some major tournaments. Austin “SilentStorm” Li, a teamless teenaged Canadian, won the ESL Legendary Series and punched a ticket to Katowice. At Viagame House Cup #2, an unknown Dane named Hoej ripped through the bracket to claim first place. At the Gfinity Spring Masters, Zozus moved on from a group containing Amaz and FaKe to beat Neirea and Sottle before finally losing to Firebat in the grand finals. All of these players came from open qualifiers.

Even SeatStory itself saw an open qualifier succeed, despite the odds: Sebastian “Ostkaka” Engwall was one of three qualified for SeatStory and placed above 28 of the invited players, losing to Orange in the final after an epic nine game series.

Hearthstone is still a young game, and we still don’t truly know who the best players are. There is so much undiscovered talent out there, which we’ve seen demonstrated over and over again. For SeatStory to feature a guy like Frodan instead of broadening qualifiers and allowing more players to make a name for themselves goes against the very spirit of esports. I understand why they don’t; obviously it’s better for business when famous players duke it out. But frankly, that’s too bad. The field needs to be fair. A 29/3 split between invitees and qualified players is an intentional, blatant attempt to freeze out the community at large. Quality Hearthstone is not determined by Twitch followings, and as much as it might hurt the bottom line, SeatStory needs to reflect that.

Obviously TaKe can do whatever it wants. It’s TaKe’s format, its competition. And the tournament wasn’t doling out any World Championship points, so Blizzard doesn’t, and shouldn’t, have any say. And who knows, in a few years when the scene is more stable, open qualification might not be necessary. But right now, as much as I love Frodan, I keep thinking of all the other great Hearthstone players bubbling under the surface, who aren’t getting a shot in lieu of a quick joke. It’s time for that to change.