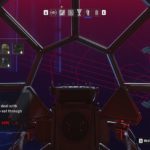 With the launch of Star Wars Squadrons, pilots flying Imperial starships can customize their cockpits with dashboard items.

Pilots within Star Wars Squadrons can acquire skins and dashboard items through Glory, earned by completing daily objectives and possible future special events. In total, there are eight Imperial dashboard items pilots can place within their cockpits.

The dashboard items range in rarity, which determines their price in Glory. Placement of the cockpit items depends on the type of Imperial starship being flown. From the Emperor’s Fist medal to Darth Vader statuette, here’s every Star Wars Squadrons Imperial dashboard item.

Used by the bounty hunter Zam Wessel during an attempted assassination of Senator Padmé Amidala, Imperial pilots have crafted Carbonized Kouhun tokens to hang in their cockpits. It’s a rare item that costs 400 Glory.

Protocol droids that talked too much, like C3PO, likely ended up headless. For pilots with zero tolerance of droids, the Droid head is a rare item that can be acquired for 400 Glory.

Corellian hounds were featured in Solo: A Star Wars Story and are a dashboard item in Star Wars Squadrons. The hound skull is an epic item that costs 800 Glory.

Some Imperial pilots are a sucker for a Mouse Droid. Often related to a pet in the Imperial Navy, Mouse Droids loved completing one task at a time. It’s an epic customization item that costs 800 Glory.

Better known as Gonk droids, they were essentially mobile power generators. For pilots with a love for nostalgia, the GNK Power Droid costs 1,200 Glory as a legendary dashboard item.

Imperial pilots are committed to the Empire, which apparently led to Darth Vader statuettes of the commander who served in the 501st Legion during The Clone Wars. In honor of his lightsaber, the sith lords’ eyes and chest control panel glow red. The Darth Vader statuette costs 1,200 as a legendary item.

Medal of the Emperor’s Fist

An honor awarded by the Emperor himself to pilots that exceeded every expectation of the Imperial Navy, only the best earned an Emperor’s Fist medal. The item in Star Wars Squadrons costs 1,200 Glory.

While most Imperial pilots seek to rise through the ranks based on individual skills, being a part of a squadron is important too. The TIE Pilot dashboard item costs 1,200 Glory and is meant to inspire those who place it in their Star Wars Squadrons cockpits.