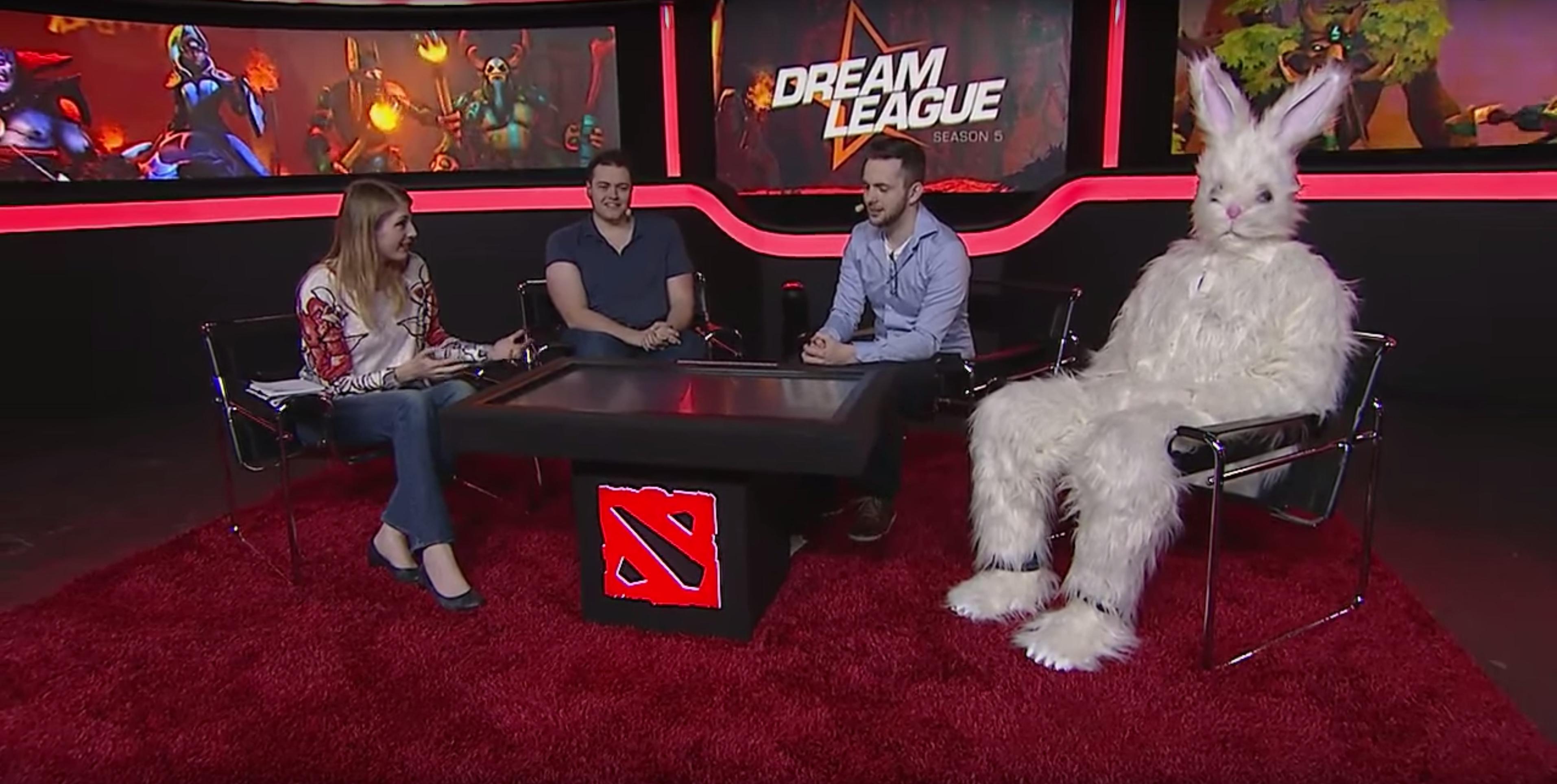 Three of the biggest personalities in Dota 2 are analyzing a game that’s just finished in the Stockholm studios of DreamHack, the legendary esports and gaming events company. That’s when the lights in the studio suddenly start blinking and an alarm blares.

Jorien “Sheever” van der Heijden starts explaining what is going on to her co-hosts, Jake “SirActionSlacks” Kanner and Niklas “Wagamama” Högström. But as if they’ve signed some faustian pact, they already know what they need to do: push “the red button,” the big button that hovers ominously between the hosts in the middle of the table. Wagamama summons the courage to push it. At first, nothing really happens, but then a nightmarish bunnyman enters the shot, takes a seat next to Wagamama, and silently stares at his co-hosts as he passes out energy drinks.

“It’s not the first time I’ve taken a strange drink from a man dressed up in an animal costume,” SirActionSlacks says. “And it won’t be the last.”

Welcome to DreamLeague, the strangest esports tournament on the Internet.

In 2013, Dota 2 was easily the second most popular esport in the world. But what separated Valve’s vision of esports at the time from its competitors was the addition of crowd-funded prize pools. The Seattle-based game studio let the community increase the overall prize pools of tournaments by purchasing in-game items, a system similar to platforms like Kickstarter or Indiegogo. This saw Dota 2 as a whole blossom, as more and more tournaments began combining their tickets (a paywall that allowed users to view professional games being played in real time) with in-game items. An unprecedented amount of money began pouring into Dota 2’s competitive scene.

But in the three years since the first crowd-funded Dota 2 event (The International 3, which boasted the largest prizepool in esports history, $2.8 million, at the time), the scene has shifted as teams become more selective of what tournaments they attend. It’s now becoming rarer to see the top brass compete in online qualifiers and leagues as they focus primarily on the International and Valve’s own multi-million dollar events, known as “majors.” As such, many event organizers are turning to other titles such as Counter-Strike: Global Offensive.

In a tweet, former joinDOTA project manager and current esports manager for FC Schalke 04, Jacob Toft-Andersen, claimed that the major circuit, which was implemented in order to shift focus away from the monster that is the International, has ironically been a kiss of death to any third party tournament organizer.

Last month, I met up with DreamLeague’s producer Martin Edsman at a café roughly 10 minutes away from the studio where DreamLeague is shot. I wanted to know how his league manages to be such an exception to this rule.

“If you’re not a major, you have to be able to provide the audience with something different,” he said. “We don’t have all the best teams in the world, but what we do have is a completely unique product.”

This has become DreamLeague’s forte. The post- and pre-game discussions during the league’s broadcasts tend to descend into intentional madness: Memes, dress-up, pile-ons, and even mockery of other events takes the viewer to bold new worlds where no Dota broadcast has ever gone before.

“I think us being able to contrast the standard esports broadcast with a laid-back atmosphere, rather than ties and endless talk about predictions, is a perfect formula for us.”

“I’m not saying that this is the path every event that’s not a major should follow,” Edsman said. “But I think us being able to contrast the standard esports broadcast with a laid-back atmosphere, rather than ties and endless talk about predictions, is a perfect formula for us.”

He’s not wrong. DreamLeague attracts a steady stream of roughly 20,000 to 50,000 viewers each broadcast. And Edsman and the rest of the DreamLeague crew are clearly hoping the craziness will attract new fans to the league itself.

Edsman, who considers himself a comedy fanatic, thinks this is one of the best ways to connect with the average Dota viewer. Edsman got his start doing radio comedy for Swedish radio station P3 and worked as a screenwriter on a number of television shows. But he has always been an avid gamer. He said that the point of DreamLeague’s quite bizarre (at least in esports-terms) production is to make the viewer feel as if they’re playing games with their pals, where joking around and pranks are commonplace.

“I’ve pretty much grown up in LAN cafés, and the focus was always on having a great time with my friends,” Edsman said. “I think that is what everyone that comes from a gaming background actually cares about. Like the essential difference between sports fans and esports fans, in my opinion, is that the latter engage in esports because it’s fun, whilst genuinely fun situations in sports usually comes from things unrelated to the game, like the commentator slipping up.”

Edsman also said that his background in television has taught him to always be open to new possibilities. “The talent we’ve got onboard for DreamLeague are all well-known within the Dota community, so being able to put them in all kinds of crazy situations sheds a new light on them. Sometimes they play along, sometimes it just gets awkward and everyone in the chat is just spamming ‘cringe,’ but it’s always fun. So to introduce something like that gives you so many possibilities during things like downtime between games.”

Dota 2, as a whole, feels like the esports community that puts the biggest focus on comedy, constantly crafting memes and messages to spam in the Twitch chat. But even so, it’s understandable that someone might not feel comfortable after they’re told in dress-rehearsal that a Power Ranger will be running onto the set with a “Vape Nation”-hand sign in-between games.

“When I first got onboard at DreamLeague, I didn’t know the talent all that well and I had no idea whether or not any of my suggestions would fly,” Edsman said. “But when they received my draft I found that everyone seemed really into my ideas, especially the red button.”The panel is asked to press the big red button at least once during each broadcast. What follows can be anything from a live mariachi band making an appearance in the studio, or a complete studio malfunction, or something else equally bizarre.

“I saw the button as a way for me to get to know them [the talent], since I could see how they’d react to whatever happened, and I think it worked in a similar way for them as well.”

“When we look at getting new talent onboard, I always try and make sure that we get the best set of characters available.”

Edsman said that SirActionSlacks, brought on at the start of the league’s current season, is the perfect fit for this vision. “When we look at getting new talent onboard, I always try and make sure that we get the best set of characters available. I’m super happy that Slacks is involved because he just adds so much to the show. He can keep up the tempo if it’s needed, and he also offers a sharp contrast to the rest of the panel in terms of personality and style as well.”

He similarly showers DreamLeague’s resident shoutcaster Owen “ODPixel” Davies with praise, calling him “an absolute genius” and also emphasizing how the contrast between Davies and the league’s resident expert Andy “Draskyl” Stiles makes them into an incredible duo.

DreamLeague, which saw its inception during the fall of 2013, has always had this air of levity surrounding it. The league was originally spearheaded by James “2GD” Harding and Bruno Carlucci, two unique personalities shaped the tone of the project. 2GD’s dry British wit (which later caused Valve CEO Gabe Newell himself to famously call him an “ass”) acted as a sharp contrast to the comparatively timid (and yet immaculately dressed) Carlucci. The league also featured innovative production features like detailed stat breakdowns and instant replays, which only helped elevate DreamLeague’s uniqueness in terms of Dota 2 broadcasts.

At the time, DreamLeague was considered one of the major competitive Dota 2 leagues. Featuring both a North American and European division, teams like Alliance, Na`Vi, and Evil Geniuses all fought through the tournament’s online league for a spot at the grand finals at DreamHack Summer and Winter respectively.

But when the second official season of DreamLeague began, the tournament came under fire from players, team managers, and the community at large following a series of poor and unclear administrative decisions in the tournament’s online qualifier. That hurt the league’s reputation among fans (and snide tweets from players didn’t help). Since then DreamLeague finds itself working on a much smaller scale in comparison to late 2014 and now focuses solely on European teams. Despite this, Edsman, who wasn’t working on the project at the time, feels that DreamLeague is in a good place.

“From what I’ve gathered everything was just so different back in those days,” he said. “I didn’t work on the project in a hands-on capacity, but given the Dota boom at the time and the fact that they utilized the newly built DreamHack studio in Stockholm, everything just felt so huge during the initial seasons.”

But rather than look back at those earlier seasons with nostalgia, he likens it to looking back at an old video game: “At the time, it just seemed as if it was the best thing ever, but looking back at it now you’d probably wonder why you enjoyed it so much in the first place,” he said, laughing.

Would DreamLeague ever consider hosting a major? “I personally just love the way we do things. I’m just imagining if Valve asked us to do the major and the lack of creative freedom I’d have in comparison to now… Or maybe not. I’m not sure what it’s like to work with Valve.”

“I’m fairly certain your Shanghai Major-sketch killed that opportunity for good,” I say, referring to a sketch aimed at poking fun at Valve’s disastrous event in Shanghai earlier this year.

“No comment,” Edsman replies, grinning. He says he often compares his talent to the cast of Seinfeld.

“No comment,” Edsman replies, grinning. He says he often compares his talent to the cast of Seinfeld. So I ask him an obvious follow-up: Who’s who? Edsman buries his face in his hands. “This is such a hard question…”After a moment, he tries to answer.

“I think Slacks has to be George, and ODPixel and Sheever are either Jerry or Elaine,” he said. Draskyl, obviously, is Kramer.

Seinfeld was a show ahead of its time in a way, its off-ball humor creating memes long before the concept entered the general public’s consciousness. It’s not hard to see why Edsman might see connections between his staff and the show’s cast. In three words, he succinctly describes his philosophy towards humor in the social media age, a philosophy that you can tell informs the production from top to bottom.