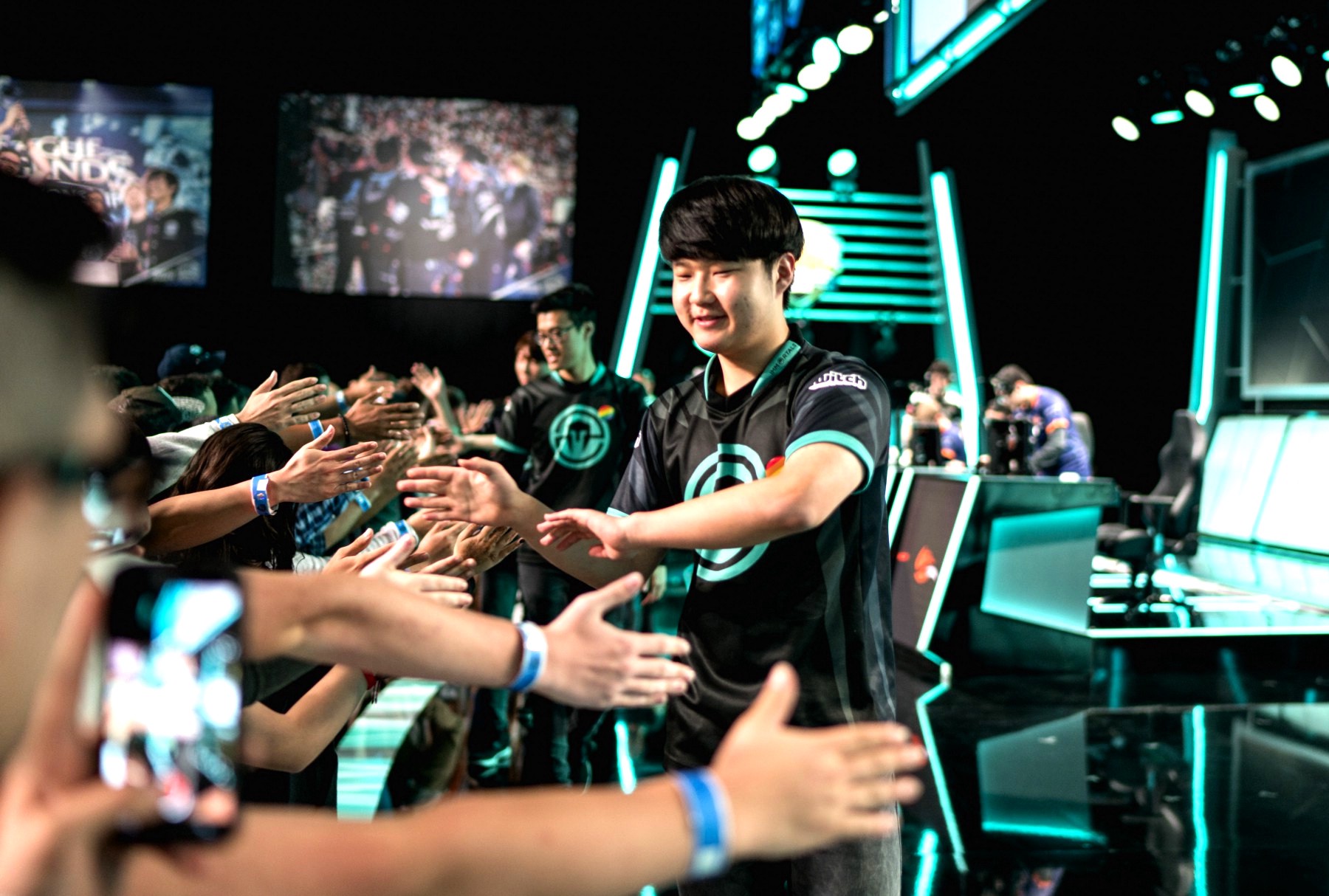 Then, more sources rolled in and the team confirmed the news: Huni has joined the defending world champions:

But this doesn’t answer the key question that most of the memes focused on: how will the team devote resources with so many carries?

Too much of a good thing?

Lee “Faker” Sang-hyeok has been the best player in the world for three years and only seems to be tightening his grip on that title. All three times SKT has won worlds, it has been in a meta favorable to his high-pressure, carry style in the mid lane. He unlocks the map for everything SKT has tried to do.

Faker and ADC Bae “Bang” Jun-sik, have hard carried multiple series on the international stage. They work so well together: Faker’s early pressure turns into bot lane priority regardless of which side of the map SKT starts on. Bang is the consistent damage-dealer and ultimate teamfighter.

But with Huni and Yoon “Peanut” Wang-ho on board, SKT now has a roster of four high-damage carries, each used to being the primary focus of their teams. On Immortals, Huni was known for playing high-damage champions that sought to build early leads and snowball. On ROX, Peanut was an invader with counter-jungling in mind.

So how will these two fit around SKT’s established veterans?

A new champion emerges in the top lane

Integrating Huni should be the easy part. SKT has won three World Championships with three different top laners. They were different players but the common thread was strong: Each was a lane bully that demanded attention lest he split push all the way to the enemy inhibitor.

The main difference was the amount of resources each required. MaRin won the 2015 Wolds MVP by playing a carry style and calling jungler Bengi to the top lane over and over again. That example is instructive because that most closely suits what Huni’s enjoyed with Reignover at his side for the last two years. It may not have been optimal to pull the jungler away from Faker and Bang, but it worked.

More ideal would be for Huni to learn from Duke’s role on the team last season (and even Impact in Season 3). Duke was a massive problem on his own. Bengi would usually only countergank for him when he sensed the opposing jungler near. It was a departure that Samsung didn’t expect in the World Finals when Bengi and Faker actively ganked for Duke.

Where Huni can be even better than Duke is his ability to join fights. A notably bad teleport (TP) user, Duke improved his timing throughout 2016 but would often still arrive in the wrong spot at the wrong time. Huni on the other hand teleports early and often. The joke is that you could place a forward ward almost anywhere and Huni would TP to it.

One area where Huni will have to improve is in champion select. He has played tanks like Trundle and Poppy, but prefers carries whenever possible. SKT will be different for him—strategic coach Kim “kkOma” Jung-gyun has a stronger grasp of the draft phase. Also, Huni isn’t coming in as a star from an 18–0 Fnatic team that made it to the semifinals at Worlds. He’ll be the lowest man on the totem pole at SKT and will have to adapt his champion pool to those of the LCK veterans. Immortals’ issues in the draft phase were not limited to Huni, and Huni’s infamous Lucian top playoff game actually went closer than many fans remember. But don’t expect anything like that with kkOma calling the shots.

The best case for SKT and Huni is that he is the perfect blend of their three Worlds-winning top laners. Impact’s stability. Marin’s teamfighting. Duke’s independence.

Since news broke that he was leaving the team, tributes to Bengi have poured in. One of most beloved members of the team, he has been credited many times for keeping things together, providing the team the chemistry and spark they needed to win three World Championships. He was never seen as the most valuable player, right until the day he left.

Keeping the group together will be Peanut’s greatest challenge. And as young as he is, he just might have the charisma to do it. Without diving into speculation on player loyalties and friendships, the effusiveness of his personality was palpable on ROX Tigers. In his farewell interview on Inven, Bengi talked about how serious and angry Faker and Bang can play the game at times. Peanut will be relied upon to keep everyone’s spirits high. Such is the challenge for the team’s youngest player in replacing the veteran older brother on a team that has been through many battles together. He needs to provide a spark.

Mechanically, Peanut will face the same challenge that Huni does: How to adapt his carry style of jungling to SKT. Due largely to their personnel, ROX relied on the Peanut and Smeb combination to snowball the game for everyone else. Peanut was known for crafty pathing that opened the map for counterjungling. Often talked about for his “mind games,” Peanut had a canny awareness of where his counterpart was and how to take advantage of that knowledge.

What do those mind games look like? Peanut’s Game 4 performance against EDG’s Ming “Clearlove” Kai in the Worlds Quarterfinals is a great example. Clearlove was the pre-Worlds holder of the “best jungler” title, and Peanut dismantled him. He anticipated Clearlove’s early pathing, stealing a blue for his own mid laner. He forced a bad back from Clearlove, messed up his pathing, and generally wasted a ton of his time. That allowed Peanut to stay even in farm while exerting more map pressure and buying more items. Meanwhile, the rest of ROX played around his location, with his duo lane walking out of a Clearlove gank. When Clearlove stayed around to re-gank a lane without summoners, he ran into one of Peanut’s Olaf axes. Peanut picked up a triple kill, ROX won the fight 4–1, and EDG’s season was over.

That’s the power of a mind game.

SKT has kept trying to fill its jungle role with a carry style player like Peanut, and it just hasn’t worked. In contrast, Bengi would often sacrifice farm for vision, falling behind on CS on even strong counter-junglers like Lee Sin. Instead, he’d use invades to set deep vision, allowing his lanes to push up without fear.

In that vision game, Bengi synergized with Faker almost perfectly. Faker shoved mid and allowed Bengi access to the opposing jungle. Bengi gave Faker the vision he needed to push and roam, ceding blue buffs on the way.

On the SKT side, the rest of the players will need to learn how to play around Peanut’s pressure if he doesn’t provide the vision that Bengi provided. That triple kill was set up by smart play by all of the ROX laners?—?pushing when they could and playing back when necessary. And Peanut will have to teach his teammates what he knows?—?how he can control the opposing jungler even without the same level of information.

This last season, Peanut has proved himself to have the necessary combination of strong mechanics and canny game sense. SKT is hoping they can mold that combination into an even more deadly jungle combination.

Faker has been effective playing a variety of champions and with a variety of players around him. But there still is the fact that he hasn’t won a Worlds without Bengi at his side. He’s going to need to show the same level of comfort with a carry jungler in Peanut taking a blue buff or two.

Bang likely won’t have to change so much. But the other player that is going to need to chance is the support, Lee “Wolf” Jae-wan. Wolf is going to need to be more assertive and work well with Bengi to direct the team. And he needs to become a more consistent player overall.

Wolf often looks like the star when SKT wins, but can also be the primary culprit in their losses. In the series against Peanut’s Tigers that sent SKT to the Season 6 Worlds Finals, Wolf was solidly out-played by his counterpart, ROX’ Kang “GorillA” Beom-hyeon. The Miss Fortune pocket pick aside, GorillA didn’t allow Wolf to take control of the duo lane, making SKT overextend elsewhere to make up for that weakness.

Wolf will need to develop a special synergy with Peanut: when to roam for vision. When to engage. When to pull back. Then, he’ll need to make sure that synergy spreads to the rest of the team.

Like the KT Superteam, there should be too much talent on this roster for the players to not figure it out. But as hard as it is to win once, it’s hard to do twice, three times. Each title increases the pressure on these players and reduces the joy; they are now expected to win.

The good thing is that Huni and Peanut have faced this type of pressure before. The bad news is that they will need to overcome it with more grace under pressure than ever. Faker and Bang will have to play even-keeled with the swirling pieces around them. Wolf will need to provide a consistent voice and better mechanics.

SKT is a special team, the only true dynasty in League. They’ve proven time and time again how strong their foundation is. Next year, they’ll get a shot to do it one more time.