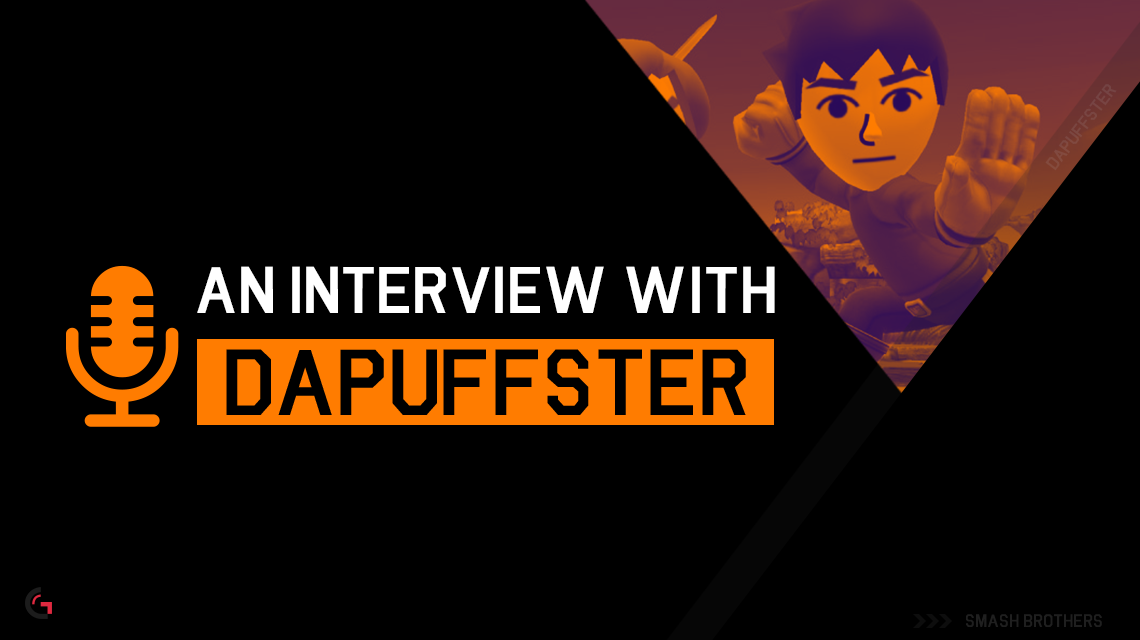 Today, I am joined by the self-proclaimed best Smash 4Mii Brawler player in the world Alex Oshrin from New Jersey, betterknown for his name “Dapuffster” or “Jigglymaster” in thecompetitive scene. Would you like to introduceyourself?

Dapuffster (Alex): Hello. Yes, I have been a part of the Smashcommunity since 2005, starting out with Melee and making my way upto Smash 4. I was also widely accepted as the best Jigglypuff inBrawl and was most recently being stated as the best Mii Brawler bythe top Smash 4 player, ZeRo.

I have not been as active in the community as I used to be formany different reasons. However, to say that being a part of thecommunity for 11 years was not a big part of my life would be ahuge lie.

So what got you into Smash Brothers in the first placecompetitively? What was the main pull to the game then say, StreetFighter or Tekken, which had much larger followings at thetime?
Dapuffster (Alex): Ah, well that was because I grew up with aNintendo console. I started out with an NES and moved up to an N64.I did not have anything else so I never grew up playing games likeStreet Fighter or Tekken. In fact, I am pretty sure that my firstfighting game was Smash Bros 64.

I was young and excited for Melee when it came out. When it did,I thought I was very good at the game, always beating my friends atit. For no particular reason, I decided to go on the internet tosee if there were tournaments for the game. What would you know,there were, and they were close by.

The tournament I went to what was called King of the Couch, andthey had all sorts of different games being played there. You wouldnot go to a Smash tournament today and expect to see games likeHalo, Madden NFL, or even Dance Dance Revolution tournaments beingplayed alongside it. The whole experience was way different than itis today.

I see, I see. I can imagine how different it is nearly10+ years later to see such a difference in the scene. With therise of esports and events like EVO giving the Smash scene morelove, I have to ask: you have said in the past that you know a lotof players personally during your career in Smash as a whole butwhich players were your inspiration going into tournaments,primarily in Smash 4 where you took part in EVO in 2015, placing inthe top 16?

Dapuffster (Alex): I do know a lot of players personally. Infact, despite not talking to him much these days, Mew2King alsostarted his journey in 2005 at King of the Couch tournaments.

I cannot say that there are any players that particularlyinspired me, but there are people who helped get me to where I amtoday.

Player-wise, I think my sparring partners are both veryimportant. My first sparring partner was a local friend of mine, hewas around the same skill level as me and through playing him, Iwas able to learn the core fundamentals of playing the game at ahigher level.

My next and still current sparring partner is Vex Kasrani. Notonly did he spar with me, but he is what we call a labber, which issomebody who spends time in training mode trying to come up withcombos and techniques that you cannot normally learn about just byplaying somebody. He also has many other connections through peoplelike Apex 2013’s champion, Salem, as well as even housing ZeRo whenthe Japanese version of Smash 3DS came out, allowing me to play thegame a month early. He also was friends with Youtuber PKsparks, wholet us play the review copy of the Wii U version before that cameout too. That really helped me get a head start on thecompetition.

Finally, while they are not a player, I would also like toaddress my parents for helping me out as well. I startedcompetitive smash at the age of 13, so for the first five years, Ihad to rely on them driving me to events, and they did. That wasvery nice of them to do.

Who in your opinion then (from your experience and fromEVO 2016) at the moment is the best player in the Smash scene? Bothin Melee and Smash4.

Dapuffster (Alex): Ah, yes deciding who the best player is ineach game. That is no easy task. If you had asked me one year ago,I would have said that ZeRo was hands down the best in Smash 4. Butnow, I am not so sure. It still could be ZeRo, it could be Ally, itcould be Anti. But honestly, I have no idea. If I had to say,though, I would say ZeRo. For being such a big win streak of 50+tournaments a year ago and with so many people targeting andstudying his play style, it is no wonder why the guy has not wonmuch recently, despite all of this, he still places high. Ally mayhave won EVO 2016, but how long will it before people download himand beat him too?

As for Melee, I am going to have to give it to my man Hungrybox.He has been an absolute monster this year with tournament resultsand he showed himself with the coolest loser’s bracket run at EVO2016, beating Plup (who knocked him into losers), Mango, and Armadaall back-to-back. He fought really hard and it would not be rightto say that he is not the best in the world right now.

Well it is no surprise really, they are all big names inthemselves. I imagine looking towards APEX and other events we willstart to see them truly tested. So tell me then, on the topic oftournaments, is it true you are the sole reason Miis are beingbanned state side? If I recall you recently topped a localtournament which resulted in Miis being banned– what is with allthe custom move mii hate?
Dapuffster (Alex): The Mii controversy, one of the reasons why Iretired from Smash 4. It is true that last weekend, I attended anevent that allowed customizable miis (not in size, only bymoveset). I defeated the tournament organizer in the tournament andI went onto winning the entire tournament without dropping a singlegame to anyone. The very next day, a poll was held, asking whetheror not they should be banned. Despite the option to ban them lostthree to one, the tournament organizer still went through with thedecision to ban them. They claimed that they had been thinkingabout doing this for a while, but it seems that this was too muchof a coincidence, since I had not been to one of their tournamentssince early 2016.

To make a long story short, characters have alternate specialattacks that are called customs. Most character’s customs justchange the property of it, such as Mario having a fast or slowfireball. The miis, on the other hand, have completely differentmoves and are the only characters in the game that can use thesemoves when custom moves are turned OFF. Thus, the Mii communitydoes not view them as actual custom moves.

The opposing side, however, does and wants to ban them sincethey do not want anyone to have custom moves. That would bereasonable, if not for the fact that they constantly complain abouthow “broken” or “busted” Mii Brawler is with his other specialattacks. Hasty actions such as banning them the day after I wonmakes it seem like they are banning the character for the wrongreasons, along with Mii Gunner and Mii Swordfighter, who havenothing to do with this at all.

My sparring partner, Vex Kasrani, helps me prove that MiiBrawler is not busted, but rather that nobody understands how tofight the character and can be beaten if played properly. Instead,the community bans them, leading to fewer people playing thecharacter which leads to less experience fighting them, which leadsto people thinking the character is busted. It is a never endingchain.

There is a lot of bullying involved as well, such as peoplealways telling us to “play a real character” or that we are just”mediocre players relying on customs.”

It is stuff like this that does not make me feel welcome in theSmash community, one that I have known and loved for 11 years.Seeing as how my passion for the game has been lost, I have sincemoved my passion to somewhere else.

So there is no way we will see you return in the future?Maybe in the next installment or if the rumoured NX port comes outin the future or is this the end of a 10-year legacy?
Dapuffster (Alex): If a new Smash game comes out or new charactersare introduced, then there will always be a possibility that I willreturn. Although it is very unlikely, if Tails from Sonic theHedgehog or Delphox from the Pokemon series became playablecharacters, I would drop the Mii Brawler in an instant to play asone of them instead, regardless of how good or bad they may be.

That is actually one of the main reasons why I play Mii Brawlerin Smash 4; because none of the characters they introduced thistime around really interested me, and I have grown tired of playingas Jigglypuff (who, in my personal opinion, is more boring to playcompared to when she was in any other smash game). Sakurai,the creator of Smash Bros., stated that Miis allowed you to play asanyone, and that is what really brought me into them, because Icould, in fact, play as anyone. It let me play who I wanted to playas. Why I picked Brawler over the other two Miis is simply becausehe moved faster than them.

Sure, I could still use Mii Brawler’s default move set, but heloses a lot of what makes him fun to play as without his correctspecial moves. Most tournaments do not even let you change theappearance of the mii. What fun is there in that?

Haha, I see. Thank you for your time today. It has beennice to hear from you. If I am right in saying since yourretirement, you have been involved more in a certain hobby ofyours. Is there something short you wanted to say about this andperhaps any final words to your fans?
Dapuffster (Alex): Yes, thank you for having me here today.

Let me just say that I will never truly leave the smashcommunity. I may not go to many tournaments anymore, but I do notthink that the community as a whole is bad. Besides, nobody canever actually leave the community.

If any of the readers wish to know where my passion lies now, itis within my latest webcomic series called “Champions of TheMelting Pot” which is a parody of fighting games. Had it not beenfor my 11 years in the smash community, I do not believe I would beable to make something like this. There is a lot in this comic thatI believe a Smash Bros. fan will enjoy. Not to mention, there willbe many references to the Smash community in it, as well asappearances from the likes of ZeRo and M2k, whom will be appearingto fight against each other in Chapter Seven of the comic. We arecurrently nearing the end of Chapter Four, so we are not too faraway from that happening. I would like you all to please give it aread if you ever get the chance.

Thank you very much for your time today Dapuffster. Wewish you the very best in your future endeavours.For those that are interested in Dapuffsters future endeavours,feel free to check out his current webcomic at http://www.alexoshrin.com/.