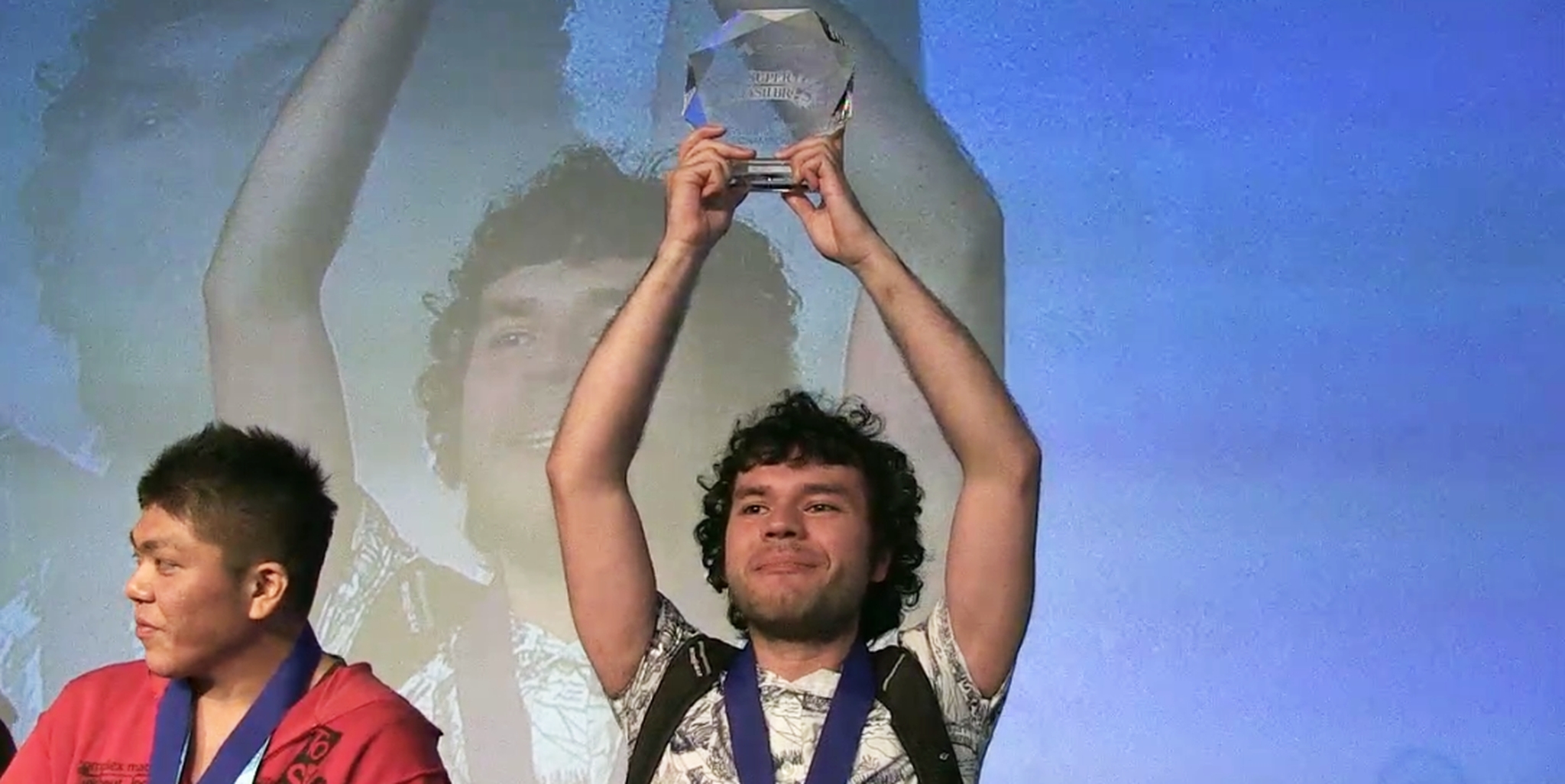 For Canada’s Elliot “Ally” Carroza-Oyarce, the third time at Evo really was the charm, even if he didn’t think the event itself was all that charming.

His victory in the grand final came over Ono “Kamemushi” Takuto of Japan, who was the darling of the tournament. Kamemushi took the bracket by storm with Mega Man, a character widely believed to be average at best. His run included wins over both of last year’s finalists, defending champion Gonzalo “ZeRo” Barrios and runner-up Ramin “Mr.R” Delshad.

Ally’s performance over his last three major events—49th at CEO last month, third at Midwest Mayhem 4 last week, and his win today—illustrates how unpredictable Smash WiiU has been as of late. This is a far cry from this time last year, when ZeRo’s Evo win was just one of his 53 consecutive tournament victories in the game.

ZeRo finished in third place this year. He was sent into the losers’ bracket by Eric “Mr.E” Webber late on Friday night, but responded by rattling off wins in seven consecutive do-or-die matches to reach the losers’ final. As dominant as he was through his losers’ bracket run, he could not find an answer for Kamemushi’s Mega Man as he fell 3-0.

James “VoiD” Makekau-Tyson earned fourth place to become the highest-placing player from the United States. He fell to ZeRo 0-2 in the losers’ semifinal, but many fans were only able to see the second match. The official stream crashed shortly before their match began and could not be restored until after the first match had taken place. The Japanese-language stream hosted by new Twitch global ambassador Umehara Daigo was unaffected by the outage.

Kawamura “Abadango” Yuta and Hayashi “Ranai” Ryuto, both of Japan, tied for fifth place. Larry “Larry Lurr” Holland and Samuel “Dabuz” Buzby, both among the pre-tournament American favorites, bowed out in seventh.

Saturday’s finals ended a tournament that included a series of events and decisions that led to much backlash against the event from both fans and players, with Ally and ZeRo among the more vocal of critics.

The tournament’s schedule was a common complaint. With over 2,600 players, the Smash 4 bracket was the second-largest tournament at the event for the second straight year. Yet Smash 4’s finals began early on Saturday afternoon, a time slot that generally draws fewer viewers than the games that take place on Saturday night and on “championship Sunday.” Finals for Super Smash Bros. Melee, which had slightly fewer entrants, will be held at the Mandalay Bay Events Center on Sunday.

The event’s tight schedule put some serious strain on some of the event’s competitors. ZeRo played in the first wave of pools at 8am local time on Friday. The quarterfinal session began at 8pm on Friday and ran until midnight. That forced a tough turnaround for those who qualified for the semifinals, as they had to begin play at 8am on Saturday.

Additional concerns about the amount of space and setups dedicated to the game were also brought up, but one of the most consistent issues was the fact that only the winners’, losers’, and grand finals were played in a best-of-five format. All other matches in the tournament were played in a best-of-three format. At most major Smash events, the best-of-five format is used for at least the top eight of the tournament.

Street Fighter V, Ultimate Marvel vs. Capcom 3, and Mortal Kombat XL will have their top eight sessions contested under best-of-five rules at Evo, with Marvel using the format for the entire tournament. The other six tournaments at the event either were held or will be held under best-of-three rules.