The first match of Twitch Rivals: Streamer Bowl didn’t disappoint with a great showdown between Tfue and Symfuhny. 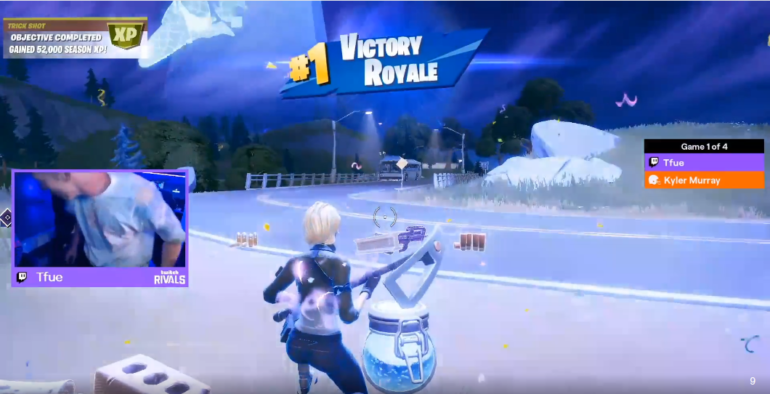 The Twitch Rivals: Streamer Bowl, where Fortnite pros and streamers paired up with NFL players to win money for charity, brought out some hype moments yesterday. One of those moments took place at the end of the first game between Turner “Tfue” Tenney and Mason “Symfuhny” Lanier.

As the storm closed on the final two players, Tfue held the high ground, forcing Symfuhny to look for ways to get in or bring Tfue down to him. There was no support for either player to lean on since Tfue’s partner, Arizona Cardinals quarterback Kyler Murray, and Symfuhny’s partner, Seattle Seahawks wide receiver DK Metcalf, were already out of the game. Tfue shot a barrage of missiles, destroying any walls Symfuhny looked to build. The pressure was on Tfue, who had no shield and only 28 health. He had to make a play.

After firing his last missile, Tfue looked to press the advantage. But in that moment, a bullet hit him, dropping him to just eight health. Tfue began to build out over Symfuhny with the hopes of landing a quick hit before building cover. It didn’t land and the pressure increased as his options were running out. The storm cloud began to move, forcing his hand. With Tfue’s materials nearly depleted, he decided to go for the play that would either win or lose him the game.

Tfue used a tree as cover and landed a tactical shotgun blast, killing Symfuhny to pull off the miraculous win. Murray looked to be in shock after the play and the commentators went nuts over what just happened.

The victory and the kills racked up in the match, giving the pair an early lead in the competition. But they ultimately finished in second place. Chicago Bears running back Tarik Cohen and Cody “Clix” Conrod won the competition, earning $125,000 for St. Jude and Prison Fellowship charities. Tfue and Murray won $80,000 for the American Foundation for Suicide Prevention and the Colon Cancer Coalition. Tfue was named the MVP of the competition.

Tfue didn’t carry Murray in the matches, either. Murray had some great shots, even taking out Kyle “Bugha” Giersdorf to start the match. It seems his accurate arm carried over in the competition. He finished his rookie season in the NFL with 3,722 passing yards, 20 touchdowns, 12 interceptions, a finalist for Rookie of the Year, and a second-place finish in the Streamer Bowl.

Not bad for a rookie.