How to get lightsabers in Fortnite - Dot Esports
Skip to content 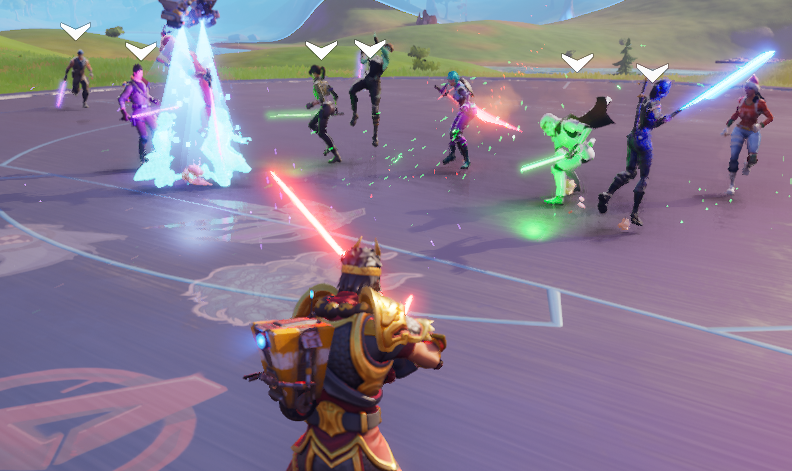 The Star Wars-themed Fortnite event showed off a new clip of the upcoming movie The Rise of Skywalker. But fans didn’t just get to see part of the movie, they can now play like a Jedi.

Lightsabers are a new melee weapon that players can wield as they run around in Fortnite, and the laser sword is just about everything you could have wanted.

Each player received a lightsaber following the end of the movie clip and a speech from Emporer Palpatine right after the Star Destroyer that appeared in the sky jumped to lightspeed.

One swing emits the iconic sound effect as you try to slice down your enemies. Every player present during the event chose their lightsaber’s color before the final cutscene, giving them a red, blue, green, or purple lightsaber once the chest popped open.

Like other melee weapons in Fortnite, each saber has the ability to deal damage when you hit an enemy with it, but it can also deflect most bullets if you time a block properly. This adds a new element to the game; players who are good enough with the blade can counter even snipers at times.

You could see dozens of players dancing and playing with the weapon before starting to battle it out with the other occupants of the server in a race between two teams to reach 100 kills. It was a 100-man lightsaber fight to the finish, which is the first time something like that has happened before.

Where to find lightsabers in Fortnite

In actual matches, however, you will have to find special chests that will drop lightsabers for you to pick up.

Instead of grabbing one of the generic blades out of those chests, you will have a chance to get one that was wielded by a Star Wars character. Luke Skywalker, Mace Windu, and Kylo Ren are just a few of the options you can find scattered around the map.

And, along with the Lightsabers, Storm Troopers have been dropped around the map that you can fight too. You can pick up Blaster Rifles by defeating them or finding Tie Fighter crash sites around the map.

These legendary weapons and all of the challenges associated with them will be in the game for eight days, so you better hop in now and enjoy living most kids’ dreams. Go and get yourself a Victory Royale by out-dueling every other player on the server.