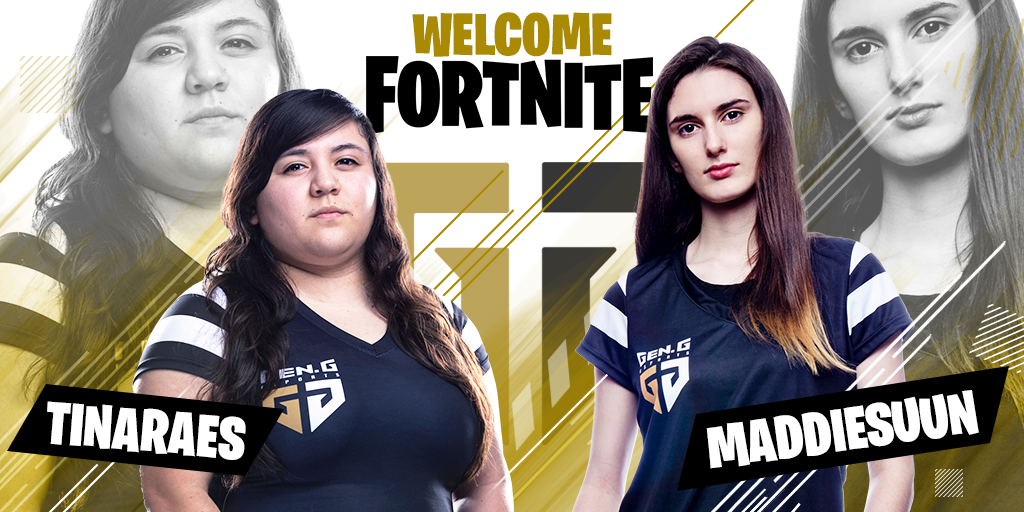 Adding to its suite of rosters, Gen.G has signed a Fortnite: Battle Royale duos team in Tina “TINARAES” Perez and Madison “Maddiesuun” Mann. The all-female duos team will represent Gen.G at the Fortnite Fall Skirmish event held Oct. 26 to 27 at TwitchCon in San Jose, California.

“We think this duo could be the best duo in the world, regardless of gender,” Gen.G partnership lead Jordan Sherman told Dot Esports. “The decision is competitive, we think that women can compete against anybody. We’re hoping we aren’t going to be the last ones to [sign women to its professional teams.] We think it’s going to be a title wave of women in gaming. But it’s not just competitive players. It’s streamers, it’s business executives, it’s agency people.”

Gen.G has also announced the addition of Kristen “KittyPlays” Valnicek as the company’s head of gaming initiatives. She’ll work alongside Sherman to introduce new sponsorships, partnerships, recruits, and community engagement. Valnicek will work with Maddiesuun and TINARAES, building off a platform she created, “Team Kitty,” that helps female gamers connect and learn from each other.

“I’m really excited to help develop [TINARAES and Maddiesuun] and support their brand-side and influencer-side, but to also work with Gen.G to give them all the resources they need to be the most competitive players out there, regardless of their gender.”

These appointments are a further push to expand Gen.G’s North American branch, Sherman said. The brand already has close ties to China and South Korea and is working toward building out its North American talent. With the new Fortnite team, Gen.G has six rosters: Seoul Dynasty in Overwatch, League of Legends, Clash Royale, PlayerUnknown’s Battlegrounds, Heroes of the Storm, and now, Fortnite.

“There’s so much room for growth across the entire esports landscape and I’m here to help Gen.G take advantage of every possible opportunity,” Valnicek said. “This Fortnite team is a perfect example of our organization looking at the industry from a wider scale and identifying an untapped segment. Gen.G fans will be incredibly happy about the direction we’re headed in.”