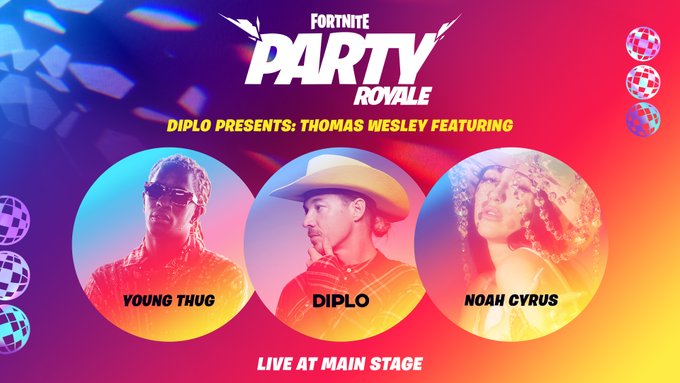 Party Royale started on May 8 as a way to showcase musical shows within the game, featuring famous artists and DJs. In the premiere, players got to watch Steve Aoki, Dillon Francis, and deadmau5 on the virtual main stage.

To participate, all you need to do is enter the game and select the Party Royale playlist in Fortnite. But you can only enter when the show starts. Players have until the room fills up to the maximum capacity to join.

If you miss Diplo’s show, there will be a rebroadcast of the full premiere on Monday, June 29 at 11am CT on the virtual main stage. Epic is also bringing back some outfits like Deadfire, Desperado, Rio Grande, Frontier, Rustler, and Nightlife, the Knee Slapper Emote, and more in the Item Shop starting tomorrow.

This event follows a series of other performances and even a movie trailer in Fortnite. Travis Scott’s Astronomical concert in April led to 27.7 million users logging in to participate 45.8 million times across five showings.

The latest in-game event, The Device, occurred on June 15 and preceded the Chapter Two, season three launch. It hit 12 million players and reached max capacity within one minute, forcing 8.4 million more fans to watch the show via livestreams on Twitch and YouTube.