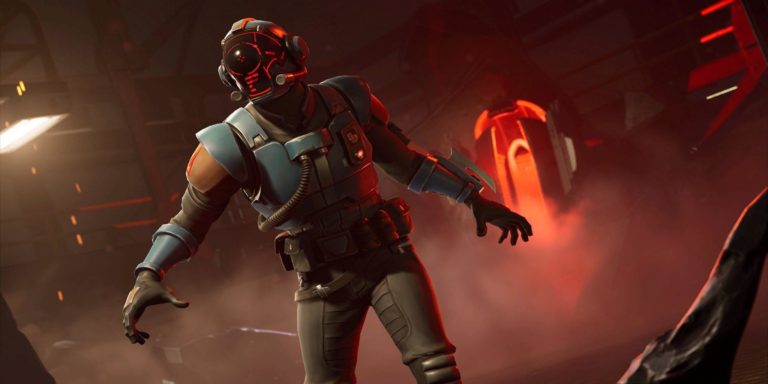 Saturday’s worldwide event in Fortnite was a spectacle. Players from all around the globe joined not to battle for victory, but to spectate as a rocket ripped into the air—before teleporting all over the place.

Throughout the season we've been lead to believe that there was an ongoing battle between heroes and villains on Fortnite's island location. At first glance, it appeared that the villains had launched the rocket to attempt to destroy Tilted Towers and the heroes stopped them.

But if you take a closer look at the loading screens that players have been unlocking throughout the season, a different story emerges.

Let's start at the beginning.

Season four began with a bang. A massive meteor that struck Dusty Depot and set off the events of the past two months.

The heroes group up

In an Avengers-like team-up, the heroes monitor Omega's actions and see that he is operating out of a base on a mountain near Snobby Shores, which is where the rocket is housed. The heroes' leader is Carbide, far left.

Omega begins to amass an army of robot soldiers for his upcoming battle.

The battle kicks off. All of the heroes and villains are involved. This loading screen features the majority of the hero and villain skins that have been added to the store throughout season four.

But this is where things take an interesting turn...

It was all...a movie? Here we see Valor and Omega chilling out on the set of what looks to be a high-budget superhero film. So was it all just for nothing but box office big bucks?

This is where things actually start to get "real." Here we see another new skin, The Visitor, stepping out of a vessel. The Visitor skin is a reward for finishing every challenge in at least seven weeks throughout the season.

That vessel was housed inside of the meteor that kicked off the season. It all started with The Visitor. Go to Dusty Divot and check it out for yourself right now, because the vessel's door is opened after weeks of the meteor being chipped away at. Here's a look at it:

And now for the final unlocked loading screen of season four...

Here we see The Visitor operating controls for the rocket just days before it launched. He was the one behind it all. On Saturday, the rocket took off and then began to teleport all over the map, in and out of sight, leaving blue streaks in its wake. Finally, the rocket breached the sky and left a large crack in it. It was a spectacle, but it left players confused.

So what exactly happened? A Reddit user by the name of TheCourierWatches has a really good idea about it.

Their theory is that The Visitor has come from a different time period via the meteor, and he was using the rocket to try and go home. The blue streaks and portals were "tears upon the fabric of the space-time continuum" as The Visitor went through "several loops through the island to get enough speed" to completely rip through the continuum to go home.

That's a cool idea in theory, but the crack that was left in the sky and several other rifts that have appeared throughout the map could have bigger implications going forward. TheCourierWatches thinks that these rifts and cracks will eventually have time leak through.

"Pieces of ancient and modern history will fall through the universe, causing the island to get a major visual revamp," they explained.

This other image, by Reddit user Discount_Pringles, shows that the crack in the sky is getting bigger with time. Something is definitely happening, and there's about ten days left before the start of season five when we could see yet another overhaul of the map.

This "Fortnite Time Travel" theory has even more legitimacy due to new datamines which show models featuring a wild west theme and a strip mall. It's possible that the rifts at Lonely Lodge and the motel are just the beginning, and we could see entirely new points of interest from different time periods replace them altogether.

Epic Games has proven time and time again that they want the Fortnite map to be a living experience that changes as the game goes on. This has been shown all throughout the season by minor changes happening across the map, like emerging buildings and trees growing in new places.

With season five on the horizon, we could see more changes than ever, and The Visitor could be the catalyst and reasoning behind it all.