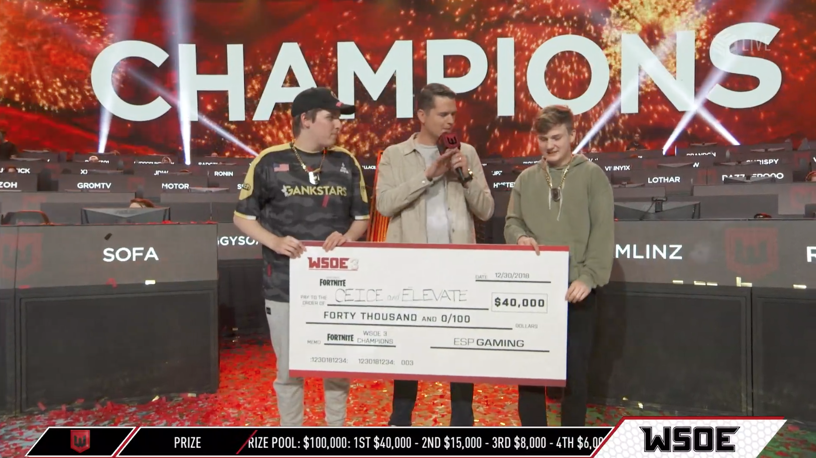 Gankstars’ Davis “Ceice” McClellan and Thomas “Elevate” Krueger of Raised By Kings earned the $40,000 grand prize of Sunday’s WSOE Fortnite event. The pair scored 610 points in the finals, defeating the 49 other teams.

Ceice and Elevate were just able to beat out Rocco “Saf” Morales and Wiliams “Zayt” Aubin, who finished in second with 590 total points. The likes of Aydan Conrad, Darryle “Hamlinz” Hamlin, and Brendan “Jaomock” O’Brien also competed in the tournament, but finished further down in the standings.

While it’s just another impressive performance from Ceice, who consistently placed well in Skirmish tournaments, the prize winnings from WSOE dwarfs what Elevate earned in his career to this point. Before the event, Elevate had won less than $10,000 from Fortnite: Battle Royale, according to Esports Earnings, but he’ll get much more than that from this event alone.

With WSOE behind them, Fortnite competitive players will turn their attention toward the in-game tournaments, as well as future Fortnite World Cup qualification, which is scheduled to begin in 2019.