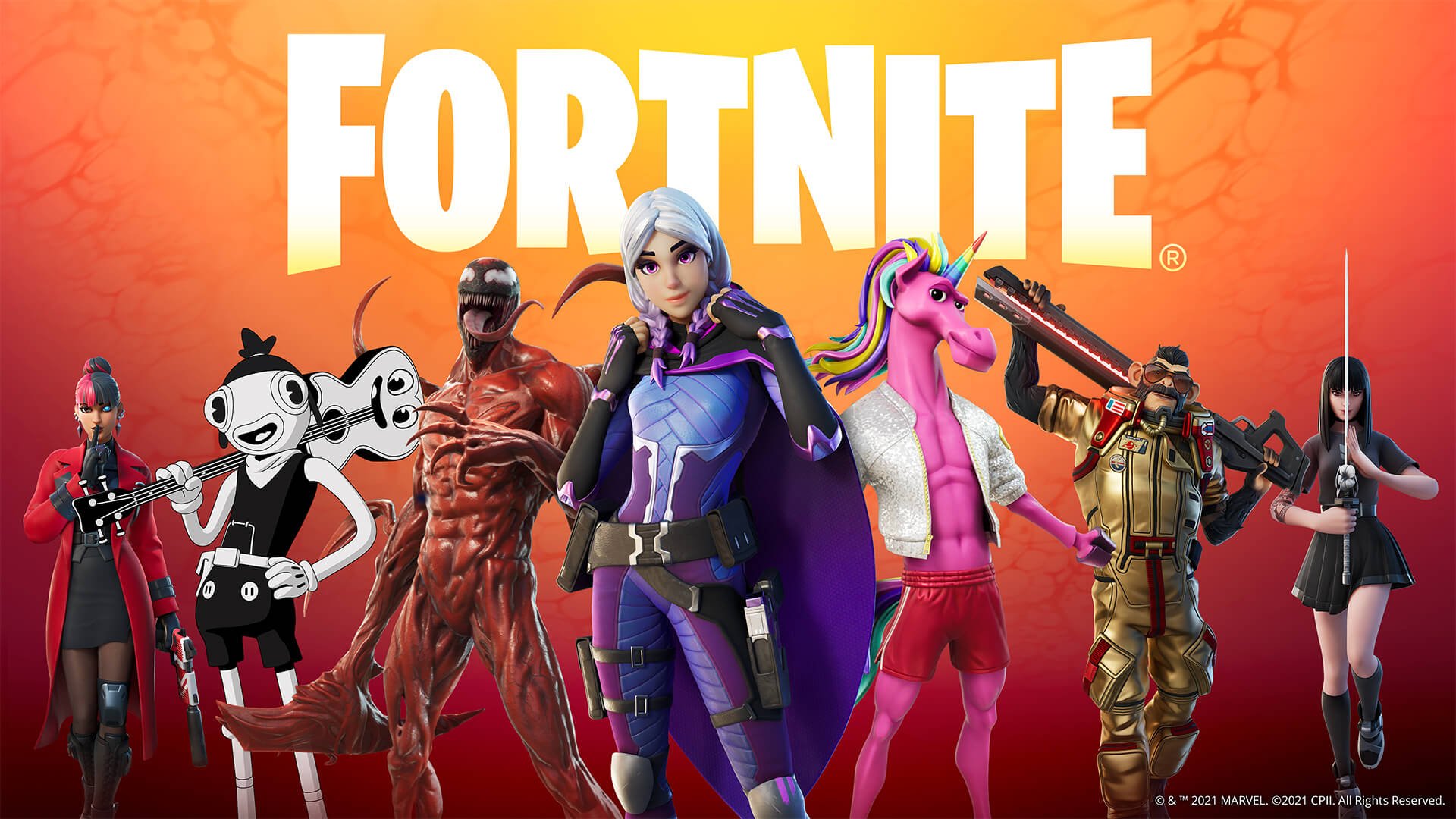 Since its launch in 2017, Epic Games’ flagship title, Fortnite, has become a pop culture sensation.

The third-person battle royale shooter has more than 350 million registered users and is especially popular among younger gamers, with 63 percent of the player base under the age of 25. The Fortnite audience also skews strongly male, with only about 28 percent of their audience being female.

Because of Fortnite‘s immense popularity, there is plenty of themed merch to choose from. But what gifts would a true Fortnite fan appreciate the most this holiday season? 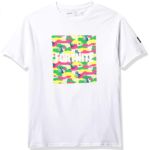 Fortnite‘s official merch store on Amazon has a few different types of Fortnite-branded apparel. There’s the recent collaboration with Street Fighter, Fortnite-branded llama tees, and burger-themed Raglans, to name a few. And then there’s a Boogie Bomb hoodie and this cool holographic backpack.

For younger Fortnite fans, there’s a third-party online shop that has plenty of brightly-colored hoodies and T-shirts in kids’ and adult sizes. Hoodies on that site cost $50 each and T-shirts cost around $35. 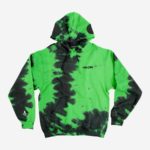 As the live streaming posterchild of Fortnite, Ninja is a household name. Anyone shopping for a slightly older Fortnite fan (let’s say, over the age of 16) might want to give Ninja’s official merch store a quick look. His merch appears well-made and designed to have streetwear appeal. His hoodies are in adult sizing and feature Ninja branding as well as special patches on the hood to make the hoodies “headphone-friendly.”

For anyone looking to buy Ninja merch, hoodies range in price from $50 to $65. Shirts are $30 to $35, and outerwear costs $50 to $60 per item. Ninja also has a few sweatpant styles on his site for $50 each. If gifters want to live on the edge, there’s also the “mystery box,” which costs $75 and contains three mystery items. Choose a size and the rest is a mystery. 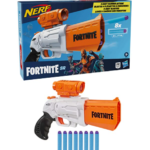 For teens, tweens, and kids, Fortnite partnered with NERF to create some foam-bullet guns inspired by the hit game. Players can get an SR blaster emblazoned with the Fortnite logo for $16. There’s also an HC-E Mega Dart Blaster on sale for $20. For fans of Fortnite‘s pump shotguns, NERF has made a kid-friendly Fortnite shotgun that costs $24 and shoots—you guessed it—harmless foam pellets. 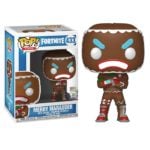 Like countless other pop-culture sensations, Fortnite has cashed in on the Funko Pop trend. There are countless different Fortnite Pops to choose from, based on a wide range of different skins and characters from the game. There’s Wild Card, Drift, Peely, Zoey, a Loot Llama, and even a Merry Marauder that really ties into the holiday theme. Fortnite Funkos can be found at Walmart, Amazon, Best Buy, and a range of other online retailers. Prices vary, but most are between $10 and $35 each depending on rarity.

In addition to the Funko vinyl collectibles, Fortnite has released plenty of licensed plush toys, too. For the younger crowd, there’s a cute Peely banana plush, a Llama plush, and a Fishstick plush all under $10 each. 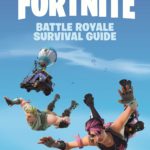 Epic Games has licensed a number of drawing books, story books, and branded journals for younger gamers. On the Fortnite Amazon store, there are a number of different drawing books to choose from under $10 each. And there’s Fortnite: The Chronicle, a book that recaps the first nine seasons of the game and offers readers a quiz at the end to test their game knowledge. There’s also an official Battle Royale Survival Guide. For those interested in crafting stories of their own, there’s this Llama journal.

For those traveling over the holidays or looking for a quick, small stocking stuffer, a Fortnite V-Bucks Gift card is something any Fortnite gamer would appreciate and use. V-Bucks are the virtual currency in Fortnite that allow players to purchase in-game cosmetics such as character skins, backpacks, gliders, and emotes.

Thankfully, the V-Bucks cards are universal, so they’ll work no matter the platform. V-Bucks cards are compatible with PS4, Xbox One, Nintendo Switch, PC, Mac, iPhone, iPad, and Android users. In the U.S., Fortnite V-Bucks cards are available for purchase at participating GameStop, Best Buy, Target, Walmart, and CVS locations. Gifters can choose from $10, $25, $40, and $100 cards, so there’s a budget-friendly option for everyone. V-Bucks cards can be redeemed here through the official Epic Games website.

Two years ago, Ninja wrote Get Good: My Ultimate Guide to Gaming, a book that chronicles his professional gaming career and offers readers tips on how to elevate their skill level. For any Ninja or Fortnite fans, this book is a must-have because Ninja outlines his approach to gaming.

The Fortnite star takes gaming seriously, offering fans a no-nonsense guidebook with plenty of color photos on how to go pro in the gaming space. Ninja spends a lot of time explaining the best hardware for gaming and his mentality on investing in good equipment so that one’s gaming skills can shine through. The book costs $4.99 on Kindle and a little over $9 for a hardcover copy on Amazon. 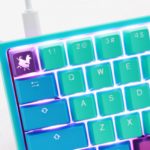 As Ninja explains in his book, mechanical keyboards are a must-have for any PC gamer looking to excel in the competitive shooter space. This colorful keyboard by Ducky and Mechanical Keyboards is a nod to Fortnite with its “Frozen Llama” branding and purple, blue, and fuchsia color scheme. While not an officially-licensed Fortnite product, it’s the ideal gift for any serious Fortnite PC gamer because Ducky is well-known as one of the best mechanical keyboard manufacturers.

The board also features Cherry MX mechanical switches, RGB backlighting, and an ultra-compact design, allowing gamers to save as much desk space as possible for small setups and maximum mouse space. Small keyboards like this are also ideal for those with smaller hands and fingers, or for those looking to game while traveling.

For keyboard enthusiasts wishing to customize their setup, the Frozen Llama board comes with a keycap remover to allow for easy, safe keycap swaps. And gamers can choose their switch type based on personal preference, with Black, Brown, Blue, Red, Silver, or Silent Red. This board costs $99 for U.S.-based gamers on Mechanical Keyboards’ website.

Most gamers have heard of the Logitech G Pro Wireless mouse—and for good reason. It’s the top choice for a number of Fortnite players, like NRG’s EpikWhale, FaZe’s Cented and Martoz, and more. Apparently, god-tier aimer Shroud loves this mouse so much he partnered with Logitech to put his name on it.

The Logitech G Pro Wireless costs $99 to $130, but the mouse’s response time, free-flowing movement, and ergonomic design make it an instinctive go-to pick for many esports pros.

For PS4 Fortnite gamers, the SCUF Infinity 4PS controller is a great option for those looking to increase their build speed and secure more wins. This controller has two extra paddles underneath, which can be bound to building keys to help make tense fights easier to handle. This controller can also be used on a PC instead of a mouse and keyboard.

On the SCUF website, gifters can customize the controller and choose its features and visual appearance. For fans of Fortnite, a royal blue color scheme might be a go-to look. SCUF currently lists the Pro controller for $189.99, and the FPS controller starts at $229.99.