Fortnite is a game of immense skill. Though it looks easy to pick up from the outside, it has a steep learning curve, and mastering all the mechanics can take years. A sweet Victory Royale makes all your efforts worth it, however, and nothing can beat the feeling of outplaying an opponent.

Any opponent you eliminate in Fortnite gets to spectate you play as long as they like, and this feature can be used to achieve all sorts of things. You can tilt your opponent more with a cheeky dance or by acting like a total newbie, or you can put on a show to help them learn from you. It’s one of the only places to show off your sense of fashion as well, and you could suddenly become that person with the sickest skin combo in Fortnite in someone’s eyes.

Considering Fortnite’s been around for a while, there are countless combinations you can try on, and it continues to grow with each season. While the following skin combos all have a certain theme and color scheme, you could replace any item listed with a variant that features similar tones.

Here are the best Fortnite skin combos of 2020

The Conqueror of Hearts 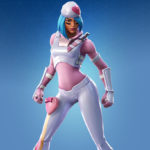 The default Skully skin looks cool, but the colors on it are just too all over the place. Its pink alternative style, on the other hand, features one of the best shades of the color inside Fortnite. Combining this skin with the Skully Satchel creates an overall sleek look and preserves the vibe.

We went with the Bold Bar pickaxe to complete the look and matched the outfit with the Ollie glider. Ollie glider’s sound effects and looks were the perfect fits, but any pink-themed glider should also do the trick here.

The Boom Drop contrail features heart effects that allow you to land in style and the Essence wrap makes sure that any gun you pick up goes well with your outfit. This animated wrap actually has a blue base, but it’s almost impossible to notice it due to how characters hold weapons. 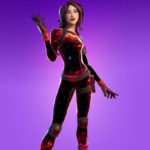 Skin combos are also a great way to send a message. If you’re feeling on fire, then your outfit should send the message.

This skin combo featuring Starflare lets your opponents know that you’re a bomb that’s ready to explode. Most back blings we’ve tried with Starflare stood out aside from Cactus Jack, which was available for purchase during the Travis Scott event.

The Crimson Axe from the Crimson Knight skin was an excellent fit for this combo since the dark red used on the pickaxe allowed it to blend in. It’s hard not to think of dragons whenever the topic is fire, and the Lavawing glider gave this set a great Game of Thrones feel.

The Lava contrail completes the whole fire theme of the skin combo, and the Burning Bright wrap seals the deal. Anything you’ll pick up in the game will start burning thanks to the wrap, making you the ultimate fire starter.

Not Even a Sweat 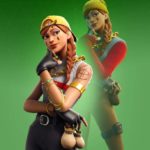 Sweating refers to pulling off every complex maneuver in Fortnite to win, and some skins became associated with sweaty players over time. This means that if you notice a player with a sweat skin, you’ll know you’re in trouble. Aura quickly picked up a reputation for a try-hard skin choice since competitive streamers frequently used it.

The Sun Sprout back bling fits the color scheme, and the Bananaxe pickaxe is one of the few options that doesn’t stand out. The Cruiser glider is nothing special, but it keeps the yellow vibes alive alongside the Chrono contrail.

The Greed wrap will let you channel your inner Midas and completes the tremendous supporting cast of yellow cosmetic items that let Aura shine the brightest. 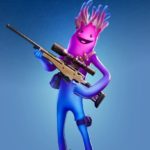 Not every skin in Fortnite needs to have a professional look. The game would lose its soul without the kind of skins you’d use to goof around, and Jellie just takes the crown for being the mushiest one.

The Starpower back bling helps Jellie stand out even more than his usual self, and the Balloon Axe harvesting tool just felt right in Jellie’s hands. Since our goal was to create a combination that would draw the attention of anyone landing near you, the Pop Dropper glider ensures that everyone landing close by knows that they’re going up against a star.

Rift Lightning contrail has a serious look by itself, but once you’re combined with Jellie it’s hard not to look cute. The colorwork on Jellie is a work of art with all the transitions and tones. The only wrap that matches his profile is the Hot and Cold wrap, and it makes every weapon look as if they were the extensions of Jellie’s body. 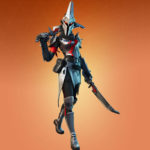 Knight-themed skins have been one of the most popular types over the years. The number of chevalier cosmetics available is a great indicator of that, and not all of them are blessed with stock items to make them look as breath-taking as possible.

The silver style of Eternal Knight is arguably the best one out of three, and the Shadowbird Wings glider’s white tips give her an anti-hero look. No knight would be complete without swords, however, and the Manta Blades pickaxe turns Eternal Knight into a dual-wieilding duel master.

No glider was able to match the spark that Blade Raven brings to the table, and the Shadow Angular Shift wrap almost feels like it was designed for this skin.

It was quite challenging to find a contrail that complimented this combo in the way we wanted, but we settled with Ice Crystals. Anything that features white particles should be decent enough to make it work, though.

The End of the World 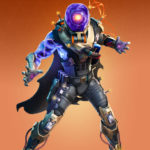 It’s easy to miss the story Fortnite is trying to tell when you’re busy running and gunning around. Each season adds extra flavor to the game in terms of lore, and Cyclo is an excellent token from Chapter two, season three, with its eye of the storm design.

The dark void back bling’s subtle design fits Cyclo surprisingly well, even though it was released back in 2018. Dark Strikers harvesting tool checks all the boxes from colors to style, and the Storm Eye glider is one of the few choices that compliments the skin combo in terms of lore.

If you have the Kevin wrap from season 10 battle pass, it’ll perfectly blend in with the whole outfit. Considering it’s almost impossible to obtain Battle Pass items after they’re gone and dusted, however, anything purple-ish should be good enough for the ruler of the storm.

While the Rift Lightning contrail perfectly fits Cyclo, we decided to go with Spectrum as a different alternative. Both contrails feature similar characteristics, but Spectrum’s tones looked better on Cyclo.

As intimidating as you can look in Fortnite, no loadout will be complete without the proper emotes. Once you’re done putting together the best skin combo you can pull off, make sure to fill your emote wheel with fitting dances.

Hitting spectating opponents with a thematic dance can make them instantly rage quit the game, but always keep your eyes on the prize. It only takes a few seconds for the next challenger to cross your path.