The new update is finally here and there’s a lot to talk about. Tony Stark’s temporal beacon has brought Stark Industries to the Fortnite island. Drones from beyond the cosmos have crash-landed and Thor’s Mjolnir Strike, Iron Man’s Repulsor Gauntlets, and more have made an appearance.

A new Mint-Condition LTM has also joined the game, mixing and matching iconic superpowers from across Marvel in a comic book crossover. And you can now customize your hero in the item shop.

But as always, well-known data miners have been digging and found all the new cosmetic items coming to the game. 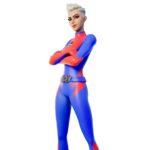 This article will be updated when more cosmetics are unveiled.