While the Marvel theme of the last Fortnite season was enough to make it one of the most memorable, the challenging weekly quests made it slightly more difficult to grind Battle Pass XP.

Chapter two, season five brought many in-game game changes like bounty quests. The XP challenges also seem to be a lot easier to complete. This makes it relatively easier to grind battle pass XP and unlock new skins. Though the quests look less demanding, the scavenger-hunt nature of them may require a little bit of a time investment if you are unfamiliar with the Fortnite map.

One of these challenges requires players to find car parts scattered around the Fortnite map. These types of quests tend to be pretty straightforward, but car parts can be easy to miss due to how small they are.

Here is where you can find each car part in Fortnite.

Where are all the car parts in Fortnite chapter two, season 5?

There are a total of three car parts that you need to collect to complete this quest. Doing so will reward you with 20,000 XP, a decent amount for any Fortnite player looking to unlock their new favorite skin as quickly as possible.

Two of these cars parts are located at Compact Cars, a tiny landmark on the map which is practically a car graveyard. You’ll need to keep your eyes open for any small floating parts on the floor, and you should be able to see the first one next to the orange car compressor, which is located near the red brick wall. 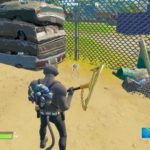 The second car part is located next to the chain fences, specifically the ones toward the right of the entrance, or left if you were to walk into Compact Cars from outside. The part is located between a couple of stacked cars and a pile of trash with green cans. 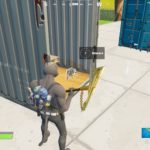 The last car part is hidden in Dirt Docks, emphasis on the hidden part since it’s impossible to find it without destroying a couple of crates. It’s in the container located just above the T in Dirty Docks. The container had a metallic grey color during our run. Even if its color changes, the part will still be inside the same container.