A YouTuber has reimagined Fortnite: Battle Royale on the original PlayStation - Dot Esports
Skip to content 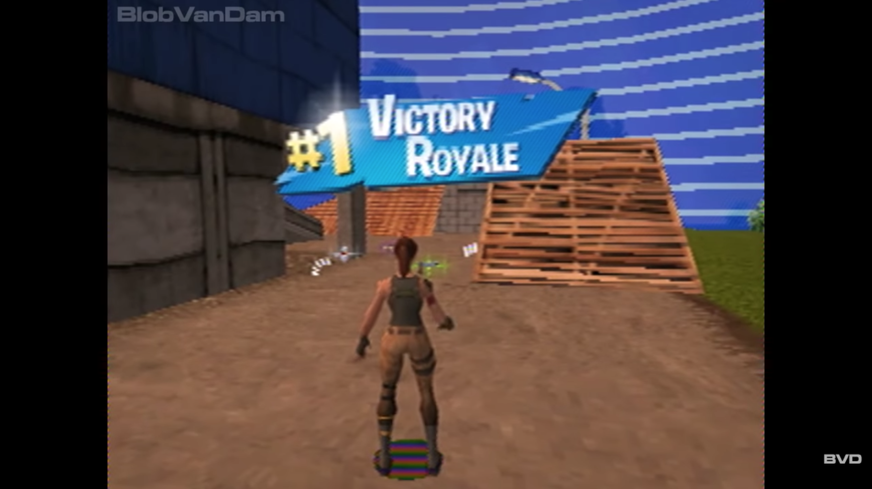 Have you ever wondered what Fortnite: Battle Royale would look like on the original PlayStation? Well, you don’t need to anymore—YouTuber BlobVanDam made a video that shows what the popular battle royale game might’ve looked like on this older console.

It has the low-quality graphics that you’d expect from a console that’s over 20 years old, but the game still looks amazing and definitely makes longtime PlayStation owners feel nostalgic.

We don’t get to see the player drop out of the Battle Bus, though. The game actually begins at the original Dusty Depot, long before the meteor strike from the start of season four leveled the warehouses and created Dusty Divot.

In a lobby with seven other opponents, the player starts farming materials and looting—luckily, the player immediately stumbles upon full shield and a SCAR. Fighting ensues when an enemy rushes into the warehouse, but the player quickly disposes of the opponent, who somehow didn’t land a single shot.

Shooting looks a little weird in the video, mainly because of the giant crosshairs and the inability to aim in as much as you can in the actual game. But that’s to be expected based on similar games played on the original PlayStation.

The player also doesn’t build as often as current Fortnite competitors, but that makes sense, too—the build meta is essentially light years ahead of this video.

In the end, the player picks up a Victory Royale and the celebration begins. Now, obviously, an older version of Fortnite wouldn’t have as many hilarious dances and emotes to choose from, but BlobVanDam closes out the video in style by having our champion do the Macarena.

Overall, this video pretty much hits the nail on the head in terms of reimagining Fortnite on such an old console.