EA Sports has added Team of the Week (TOTW) 27 to FIFA 22 Ultimate Team today. You can get the new Inform cards through the FUT market and in player packs.

A new set of TOTW cards becomes available every Wednesday, offering cards for players who stood out during league matches or when national team games end. The cards released today will be replaced next week, but players can have multiple TOTW cards, so the same player can be featured in the next TOTW packs. 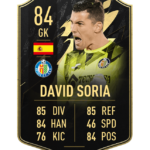 This is a good week to try getting TOTW cards if you’re not used to it. There are a lot of great cards you can get through packs, but that will depend on luck, and the best cards are priced generally low when compared to last week.

Here is the full list of all of the TOTW 27 cards added to FIFA 22 Ultimate Team today: