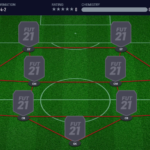 Formations are an important part of your tactical repertoire in FIFA 21 Ultimate Team. The right formation can transform you into an elite-level FUT Champions players, especially because everyone is sweating more than ever due to Team of the Season (TOTS).

This guide will bring some of the most effective FIFA 21 Ultimate Team formations—but be careful. It isn’t worth picking a formation that doesn’t suit your playstyle or your current team. After all, one of FIFA‘s key aspects is to be comfortable while playing.

Here are the formations we’d recommend trying out in FIFA 21 Ultimate Team.

Sometimes you just have to follow the basics. The 4-4-2 is arguably the most traditional soccer formation, both in FIFA and real-life soccer. At a first glimpse, it may look like the boring and default formation that everybody uses, but you should try it at least once.

The 4-4-2 is one of the most versatile formations because it allows you to play balanced, defensive, and aggressive. If you set your center midfielders (CMs) to “stay forward while attacking,” you’ll have six men pressing your opponent’s defense, which is good if the scoreboard is tied or if you are behind. You can also set the CMs to “stay back while attacking,” which is good to avoid counter-attacks.

Ideally, you’ll want to start the game with one CM on “default” and the other on “stay back while attacking” to study how your opponent plays. You can score goals with this setup because the wingers tend to be more aggressive in FIFA 21 than they were in FIFA 20 while playing in 4-4-2.

It’s important to remember, though, to set your full-backs to “stay back while attacking” all the time. Otherwise, they’ll run out of stamina in the second half and your opponent will most certainly punish you with counter-attacks.

Forget the last editions of FIFA. The 5-2-1-2 was often not good enough in the past as most of the three-at-the-back or five-at-the-back formations. But it has become a meta formation in FIFA 21 Ultimate Team because of it’s one of the best all-rounded options you can use.

It offers several attacking options because of the two wing-backs, since they’ll give you the necessary width, a key factor this cycle, to be able to keep passing the ball thus maintaining possession in your favor. We’d advise you to keep the player instructions, especially the ones to the wing-backs, as “default.” This way, your team will have enough men to attack and defend successfully.

This formation was nerfed in the previous editions of FIFA but is now back in full force. It features one striker and two attacking winders, which means you’ll have three players up front threatening your adversary’s defense.

It’s a good option if you aren’t the type of player who likes to retain possession at all costs because the 4-2-3-1 is an excellent formation to perform counter-attacks, which are incredibly deadly in FIFA 21 Ultimate Team, where almost everyone plays with pacey strikers and wingers.

This alternative version of the 4-2-3-1 is perfect for players who like to play the possession game and dictate the pace of a match, because it has two wide midfielders instead of three CAMs. It’s best suited to a slow styles of play, since the formation allows you to pass the ball around while you wait for the best option.

The 4-2-3-1 (2) is a good formation to use balanced settings on your players, but that doesn’t mean that you should the whole game with the same strategy. Be sure to watch how your opponent is playing and consider letting one of the center defensive midfielders (CDMs) join the attack if your rival is playing too passive.

The 4-2-2-2 is similar to the 4-4-2 when setting up, but it’s a touch more offensive as the two center attacking midfielders (CAMs) will play as attackers more often. You can start a game on the basic 4-4-2 and then switch to the 4-2-2-2 depend on how your opponent is playing or if you feel you need more attacking power.

It’s important, though, to set both of your CMs and full-backs to “stay behind while attacking.” Otherwise, you’ll just suffer counter-attacks for days. One of the best aspects of the 4-2-2-2 is you can put pressure on your opponent while they’re still passing the ball in their backline because you’ll have essentially four men to try to steal the ball.

Just like the 5-2-1-2, the 3-5-2 became incredibly meta in FIFA 21 Ultimate Team. It’s an excellent formation that offers everything, including a solid defense and multiple attacking options.

When the formation is set to balanced, the wingers will be there to help you build the attack and maintain possession, but they’ll also make deep runs on the attack from time to time and you’ll have three center backs and two midfielders to protect you from getting countered.

The only downside of the 3-5-2 happens if you keep constantly using your wingers in the attack because your opponent can use through balls to get in behind of your wings. Keep in mind that sometimes you’ll need to manually pull a midfielder or center back to cover the open space.

The 3-4-2-1 is another one of those versatile formations. You can use it to secure a result when you’re ahead because you can have seven players defending if you set the defensive style to “drop back.”

But you can also use 3-4-2-1 if you’re desperate to attack at the end of the game and find a goal, especially if you use the “fast build up” attacking style. All of the sudden, you’ll have seven players moving up the field to press the adversary.

Like other formations, we’d advise you to create different instructions for the 3-4-2-1 to change according to how your adversary plays or the situation of the game. Start the game on balanced and figure it out what’s your next move during the match.

This formation has been far too defensive in the last editions of FIFA but became a decent option in FIFA 21 because of the Creative Runs system and the improvements on how players move in general.

Play it the way you want. Want to play defensively? Set your three midfielders to “stay behind while attacking.” Need to score a goal? Free your midfielders to attack and set one of your wingers to “free roam.” This way they’ll leave the sideline to create opportunities in the middle.