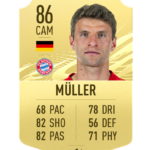 EA Sports recently revealed the overall ratings of the 100 best players in FIFA 21, which will officially launch on Oct. 9.

This list, however, contains the top 10 midfielders (CDM, CM, and CAM) in FIFA 21. The list won’t take into consideration cards that will be released for FIFA 21 Ultimate Team, where several new cards are added to the game mode every week.

Here are the 10 best midfielders in FIFA 21 that you can play with in friendly matches, Career Mode, and Ultimate Team, according to the ratings released by EA Sports.

When the 2019-20 season started, many thought that Müller’s days on Bayern Munich were numbered. The veteran wasn’t playing too many minutes with Niko Kovač, but his perspective suddenly changed when Hansi Flick became Bayern’s head coach.

Müller once again was a vital player in Bayern’s starting 11 and contributed with important goals and assists throughout the European Treble run. EA Sports has maintained Müller’s overall rating (86) and we included him on this list rather than Paul Pogba, Marco Verratti, Alejandro Gómez, Jordan Henderson, and David Silva because of Müller’s big contributions last season.

Busquets, on the other hand, couldn’t have finished the season in a worse manner. Barcelona suffered one of the toughest losses in the club’s history, 8-2 to Bayern in the UEFA Champions League (UCL) quarterfinals. Humiliation aside, Busquets still is Barcelona’s main pillar in the midfield.

Busquets has great passing, vision, and marking skills, but he isn’t perfect. Although his overall rating in FIFA 21 will be high (87), he definitely lacks Pace (42), which could cause problems if FIFA 21 relies on Pace as much as FIFA 20 did. EA has decreased Busquets’ overall by two points when compared to FIFA 20.

Modrić is a true hero in Croatia. The 35-year-old led Croatia to the grand finals of the 2018 FIFA World Cup, was elected the best soccer player in the world at the end of that year, and has helped Real Madrid win four editions of the UCL.

The most recognized Croatian player of all time will have his overall rating significantly decreased in FIFA 21 (90 to 87). This edition of FIFA may be your last chance to play with Modrić on Real Madrid too since many media outlets believe the 2020-21 season will be his last one with the giant Spanish club.

Few defensive players are as solid as Fabinho is nowadays. The 26-year-old arrived in Liverpool in 2018 after five years with Monaco and quickly became one of the main pillars of Liverpool’s starting 11.

Although he usually plays in the midfield zone, Fabinho can also play as a right-back and as a center-back because of his versatility. He’s highly praised by Liverpool’s head coach Jürgen Klopp and has already helped the English team win the UCL and Premier League in the span of two years.

EA has upgraded Fabinho’s overall rating from 85 to 87 when comparing FIFA 21 with FIFA 20. If you need a defensive midfielder in Career Mode, you can go for Fabinho since he’s still just 26-years-old and has plenty of years ahead of him.

Bruno Fernandes has arguably been the most impactful signing for Manchester United in the last five years, at least. The Portuguese star arrived in Manchester in January from Sporting and quickly adapted to the Premier League.

He was the new blood that Manchester United needed to turn things around. He helped the team skyrocket up the standings, managing to qualify for the UCL at the end of the season. For that, EA has boosted Bruno Fernandes’ overall rating from 85 to 87, which will make him one of the best CAMs in FIFA 21.

Kanté is one of those players that every manager wants to have. The French star has great defensive skills and a physical nature that allows him to run throughout an entire match.

The 29-year-old is one of the most agile players on this list, alongside Bruno Fernandes, which definitely helps in FIFA games. Pace is such a crucial factor, whether you’re controlling attackers or defenders, because whoever’s faster will most likely win duels in FIFA.

Chelsea didn’t have the best season, though, which may explain why EA has downgraded Kanté’s overall rating from 89 to 88. But don’t sleep on him when you play against him.

Kroos has been one of the best soccer players of the century. Not too many players manage to keep a guaranteed spot on Real Madrid’s starting 11 and that’s something that Kroos can certainly be proud of.

The 30-year-old is highly praised for his passing skills and leadership. If Casemiro is known for guarding Real Madrid’s defense, Kroos is the guy that makes the gameplay flow. EA will maintain Kroos’ overall rating from FIFA 20 (88). But be aware that Kroos lacks Pace, which can be a pain most of the time in FIFA.

Kimmich is one of the most versatile players of his generation. Bayern Munich has yet to find a position that he doesn’t play well. The 25-year-old can play well in four positions: center-back, right-back, center defensive midfielder, and center midfielder. Kimmich fills any gap that Bayern needs.

EA Sports recognized Kimmich’s hard work and has upgraded his overall rating from 86 to 88. It’ll be the first time in FIFA that Kimmich’s main card will be a CDM and not an RB or CM.

Casemiro was arguably the best player on Real Madrid in the last soccer season. The Brazilian has developed into one of the best, if not the best, center defensive midfielders in the world under the guidance of Zinédine Zidane.

The devs recognized Casemiro’s last season with Real Madrid and have upgraded his overall rating from 87 to 89 in FIFA 21. The Brazilian will have 91 Physical, which will help him win a lot of duels for you.

De Bruyne has been one of the most skilled soccer players over the years, but he reached a career-high in the 2019-20 season. The Belgian was awarded the Premier League Player of the Season after scoring 13 goals, having 20 assists, and creating a total of 104 goal chances, the most for a player in any of Europe’s top five leagues since this data became available for each competition, according to OptaJoe.

EA, however, didn’t upgrade De Bruyne’s overall rating. His main card will still be a 91, which must feel a bit unrewarding for the Belgian star.