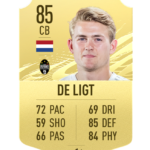 EA Sports has released the overall ratings of the 100 best players in FIFA 21, which will officially launch on Oct. 9.

This list, however, contains the top 10 center-backs (CB) in FIFA 21. The list won’t take into consideration cards that will be released for FIFA 21 Ultimate Team, where several new cards are added to the game mode every week.

Here are the 10 best center-backs in FIFA 21 that you can play with in friendly matches, Career Mode, and Ultimate Team, according to the ratings released by EA Sports yesterday.

De Ligt arrived in Piemonte Calcio in 2019 after a phenomenal campaign with Ajax in the 2018-19 UEFA Champions League. He signed a five-year contract with the Italians, who paid €85.5 million to acquire the 21-year-old star.

The Dutch center-back had a rough start on Piemonte Calcio since it took some months before he fully adapted to the Serie A’s level of competition. In January, de Ligt wasn’t a regular starter, but he gradually earned more playing time on Piemonte Calcio throughout the season.

EA Sports has maintained de Ligt’s overall rating from FIFA 20 (85), but he’ll surely become one of the best center-backs in FIFA 21‘s Career Mode because he’s still young and has a lot of room to develop his game.

One of the best players on Paris Saint-Germain in 2019-20, Marquinhos adapted his playstyle to play as a center defensive midfielder throughout the season. The Brazilian did what Thomas Tuchel wanted and even scored two decisive goals in the UCL playoffs.

Marquinhos will remain a center-back in FIFA 21, though. EA Sports has surprisingly decreased the Brazilian’s overall rating from 86 to 85, which is strange.

Although Varane isn’t that old (27), he’s already accomplished plenty in his career. The French star has helped Real Madrid win four UCL championships, three editions of LaLiga, and also was a part of the France squad that won the 2018 FIFA World Cup.

EA listed Varane as the eighth-best center-back in the game, which is based purely on in-game stats. If FIFA 21 ends up being as Pace-based as its predecessor, Varane will actually be one of the best options in the game because he’s the most agile CB on this list. EA has upgraded Varane’s overall rating from 85 to 86 in FIFA 21.

Honestly, there are better options in real life than Hummels, but EA Sports still considers Hummels a top 10 center-back in the world. The 31-year-old returned to Borussia Dortmund last season after spending three years with Bayern Munich.

Unlike Varane, Hummels is one of the slowest center-backs on this list, which was definitely a let down in FIFA 20. We don’t know how FIFA 21 will work, so we’ll see if having more Defending stats will actually mean something in this game. Although EA praises Hummels, the devs have actually downgraded his overall rating from 87 to 86.

Piqué has been one of the main pillars of Barcelona over the years, but he might be close to leaving Catalonia in the near future. The 8-2 loss to Bayern Munich in the UCL quarterfinals left Barcelona in shambles and the center-back was the first to say that the club needed changes. Piqué offered to leave himself if the club wanted to go that route.

That said, this may be your last opportunity to play with Piqué on Barcelona. The 33-year-old has been clearly showing signs of decay over the years and EA has significantly decreased his overall rating from 88 to 86. Piqué is the slowest center-back on this list, so watch out for that.

Chiellini is by far the oldest player on this list. The Italian recently turned 36-years-old but remains as a true leader of Piemonte Calcio. The veteran had a severe injury at the start of the 2019-20 season, though, and only came back in February.

Due to his injury, Chiellini lost his place in Piemonte Calcio’s starting 11 and only played in four matches, all of them in the Serie A, throughout the season. Chiellini may recover his prestige with Piemonte Calcio’s new head coach, Andrea Pirlo, but EA has downgraded his overall rating from 89 to 87 in FIFA 21.

Laporte will play his third season in the Manchester City jersey. The French star was signed for a record-breaking fee by both Manchester City and his former club Athletic Bilbao in January 2018 and is yet to mark his name as one of the best defenders that Manchester City has ever had.

It’s unclear if Laporte will reach his full potential in the 2020-21 season. For now, EA hasn’t changed his overall rating and he’ll be an 87-rated player in FIFA 21, just like he was in FIFA 20.

It’s a true mystery how Napoli manages to hold onto Koulibaly after all these years. The Senegalese has arguably been the best center-back in Serie A for a couple of years, which is more than enough to justify a transfer to Piemonce Calcio.

The Napoli defender is one of the most physical center-backs on this list and a good asset for free kicks or corners because of his height, if EA Sports makes headers a viable strategy in FIFA 21. Napoli wasn’t up for the task last season, though, which may have encouraged EA to downgrade Koulibaly’s overall rating from 89 to 88 in FIFA 21.

Although Ramos isn’t young anymore, he still disrupts an adversary’s attacks and is one of the best scoring center-backs in soccer. We know that Ramos has everything to be a strong asset in FIFA 21 when it comes to defending and hopefully we’ll be able to score more headers in the upcoming version.

Ramos is looking like a well-rounded option in FIFA 21 since he’ll have the tools to make tackles and also has high Passing stats for a center-back. EA has barely changed Ramos’ stats for FIFA 21 and he’ll have the same overall rating that he had in FIFA 20 (89).

Van Dijk is without a doubt the best center-back in the world. He arrived in Liverpool in January 2018 for a record-breaking value for a defender, his old club Southampton claimed. The Dutch star quickly fixed almost all of Liverpool’s problems on defense and helped the team win the UCL in 2019 and the Premier League in 2020.

Van Dijk’s skills translates accurately into FIFA. He’s a true bully in the game thanks to his Physical stats, body type, and tackling capacity. You can expect some headaches whenever you play against someone with van Dijk in FIFA 21 since EA has maintained his overall rating of 90.