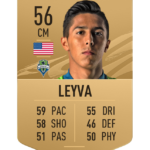 EA Sports has released a list this week that contains players that can evolve the most in FIFA 21 Career Mode.

EA has been making all sorts of lists with ratings since last week. This list is help you to either make some profit in FIFA 21 Career Mode or to just develop a future star to your own club. These players start with a low overall rating (OVR), but can become solid players after a few seasons in Career Mode.

The player with the highest potential growth in FIFA 21 Career Mode is the American Danny Levya from Seattle Sounders. Levya starts the game with 56 OVR, which is barely usable if you play in a big soccer league, but Levya can evolve into a 81 OVR player (+25) if he gets enough playing time.

To develop these players, you’ll have to use them with regularity in your Career Mode or loan them to clubs where they’ll have enough playing time. If you have them on your club, be sure to also follow their training program, so you can shape them the way you want to.

Here are the all the players with at least a +22 potential growth in FIFA 21 Career Mode. You can check the entire list over at EA’s website.