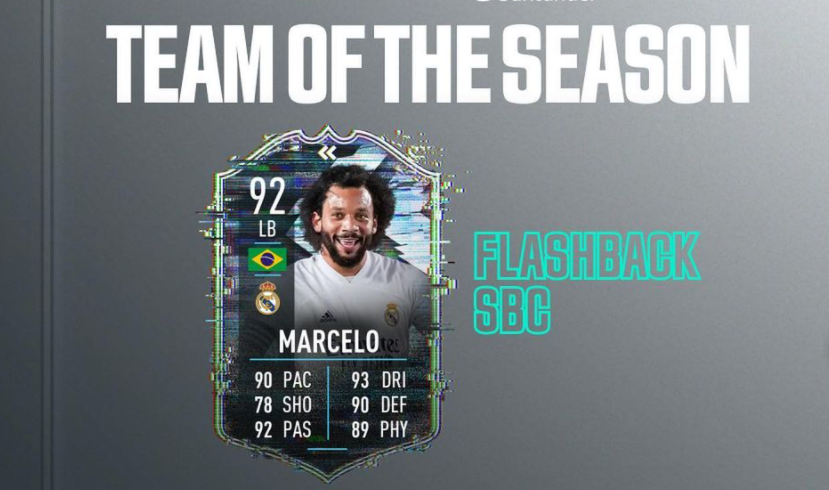 This is Marcelo’s first special card. He’s part of the LaLiga TOTS promotion and will be available until May 14. Team of the Season celebrates and highlights the best players who had a large impact on their respective clubs in the different leagues across Europe.

This card is amazing. He has high stats, five-star skill moves, and a four-star weak foot. If you apply the anchor chemistry style, you’ll increase his Physical (+7), Pace (+5), and Defending (+5), which will maximize or almost maximize many of his skills, like Interception, Strength, Aggression, Standing, and Sliding Tackle.

If you prefer to focus the upgrade on one skill, you can also apply the shadow chemistry style to increase his Pace (+9) and Defending (+5) to maximize his Acceleration and Sprint Speed instead of his Strength and Aggression.

This SBC costs around 755,600 FUT coins on PS4, 737,750 on Xbox One, and is much more expensive on PC (961,450 FUT coins). This card is overpriced, despite its incredible stats. But he can also make perfect and strong links with other incredible EFL and Brazilian players, like 97-rated TOTS Benzema, 96-rated TOTY Ramos, 94-rated TOTS Casemiro, and legends such as Pelé, Ronaldo, and Garrincha.

Here’s the cheapest solution to complete TOTS Marcelo da Silva right now, according to FUTBIN, a website that specializes in FIFA content.