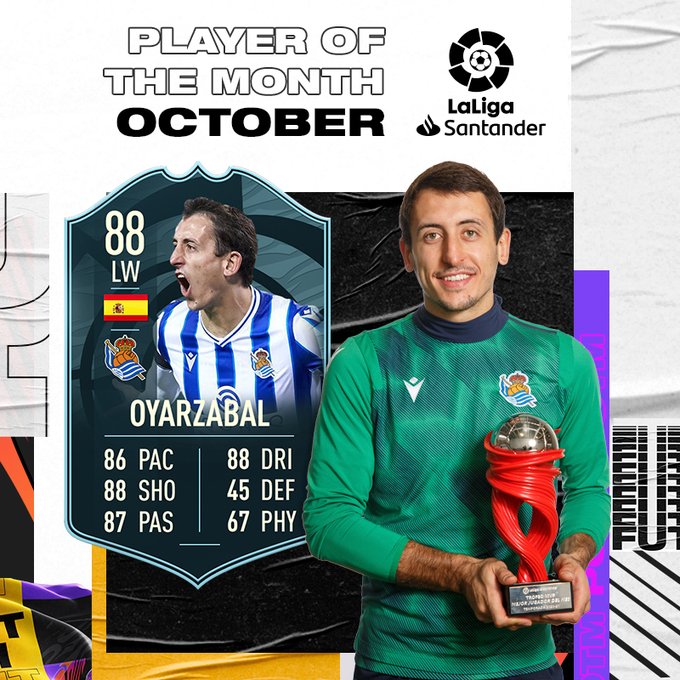 EA Sports introduced an 88-rated Player of the Month (POTM) version of Mikel Oyarzabal from Real Sociedad to FIFA 21 today. This item is available through the squad-building challenge (SBC) menu in FIFA 21 Ultimate Team.

This is Oyarzabal’s second special card in FIFA 21 Ultimate Team. He scored at least one goal in all three LaLiga matches that Real Sociedad played in October (one against Getafe, one against Real Bétis, and two against Huesca). This SBC will expire on Dec. 4.

EA has boosted all of Oyarzabal’s stats, including Pace (+3), Shooting (+3), Passing (+3), Dribbling (+3), and Physical (+2), when you compare this new card to Oyarzabal’s 86-rated Team of the Week (TOTW) version that he gained in October. This POTM version of Oyarzabal is great because his stats are amazing, but EA didn’t boost his skill moves or weak foot, which are both three-stars.

This SBC costs around 70,000 FUT coins on Xbox One and PC and is even cheaper on PlayStation 4 (60,000 FUT coins) at the moment. This is a true bargain for an 88-rated card that fits the meta so well and will play as a 91-rated card if you apply the hunter chemistry style to boost his Pace and Shooting, according to FUTBIN, a website that specializes in FIFA content.

If you want to complete POTM Oyarzabal, you’ll only need to turn in one squad. The solution requires an 85-rated squad with 50 chemistry and at least one player from LaLiga.