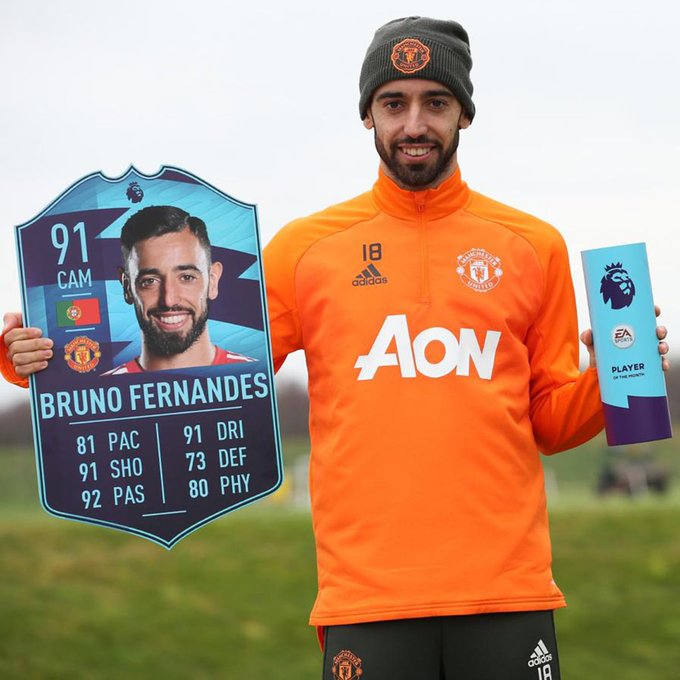 EA Sports has added a 91-rated Player of the Month (POTM) version of Bruno Fernandes from Manchester United to FIFA 21 today. This item is available through the squad-building challenge (SBC) menu in FIFA 21 Ultimate Team.

Fernandes earned two Inform cards earlier this year and made it into Team of the Group Stage (TOTGS) last week. He received this Premier League POTM card version because he played four games in the Premier League during November and scored four goals and had one assist. This SBC will expire on Jan. 11.

EA has mainly boosted Fernandes’ Shooting (+8) skill but also increased other stats, including Dribbling (+6), Defending (+5), Physical (+4), and Passing (+4), when you compare this new card to his 87-rated gold version. This POTM version is an all-around card and there are three good chemistry styles depending on how you want to play POTM Bruno Fernandes: the hawk, the engine, and the hunter.

This SBC costs around 953,600 FUT coins on PS4 and is a touch more expensive on Xbox One (998,950) and on PC (1,072,300 FUT coins). POTM Fernandes’ value isn’t great because you’ll spend nearly one million FUT coins on an untradeable card. If you care about your coin balance, you can buy TOTGS Fernandes in the FUT market for the same price and sell him whenever you want to.

If you want to complete POTM Fernandes SBC, you’ll have to turn in five squads: National Duty, Manchester Unites, Premier League, 87-rated squad, and 88-rated squad. The last one will be the most expensive solution, which requires an 88-rated squad with 50 chemistry minimum. You can link this card with other great players from Manchester United, such as Rulebreakers Paul Pogba and any version of Marcus Rashford.

If you complete the POTM Fernandes SBC, you should consider using the engine chemistry style since it’ll boost his Pace, Dribbling, Positioning, and Passing. But you can also go with a hunter chemistry style if you want more Pace and Shooting than anything.

Here’s the cheapest solution to complete POTM Bruno Fernandes SBC right now, according to FUTBIN, a website that specializes in FIFA content: