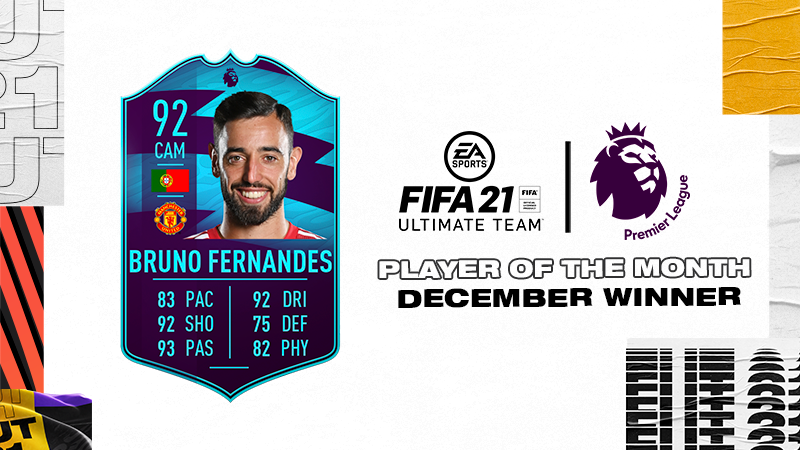 EA Sports added a 92-rated Player of the Month (POTM) version of Bruno Fernandes from Manchester United to FIFA 21 today. This item is available through the squad-building challenge (SBC) menu in FIFA 21 Ultimate Team.

Fernades received this Premier League POTM for December. He received the same card version in November and managed to stay in the spotlight for another month. Apart from these two special cards, Fernandes has received two Informs, one Team of the Group Stage (TOTGS) version, and most recently a Headliners card. This POTM SBC will expire on Feb. 15.

EA somewhat improved all of Fernandes’ skills, including Physical (+4), Defending (+3), Shooting (+3), Pace (+3), and Passing (+2), when you compare this new card to his last 90-rated POTM version. This is a versatile card and you can basically play him anywhere in the midfield or on the attack. Apply the shadow chemistry style to give him more Pace and Defending and he’ll become a top-notch box-to-box midfielder. Use the hunter chemistry style to boost his Pace and Shooting if you want to use him as a striker or the engine chemistry style to transform him into an awesome center-attacking midfielder.

This SBC costs around 1,101,600 FUT coins on PS4 and 1,071,850 on Xbox One but is slightly more expensive on PC (1,223,500 FUT coins). It’s definitely an end-game card due to his fairly well-rounded stats, which means this will remain a good card until at least Team of the Season (TOTS) is released.

If you want to complete POTM Fernandes SBC, you’ll have to turn in a total of six squads. Out of the six, the most expansive one will require an 88-rated squad with a 50 chemistry minimum. Three squads ask for at least one Inform and you’ll need one player from Portugal, one from Manchester City, and one from Premier League for another three. You can link him to superb cards such as any version of Cristiano Ronaldo from Piemonte Calcio and any upgraded version of Marcus Rashford from Manchester United.

Here’s the cheapest solution to complete POTM Fernandes SBC right now, according to FUTBIN, a website that specializes in FIFA content: