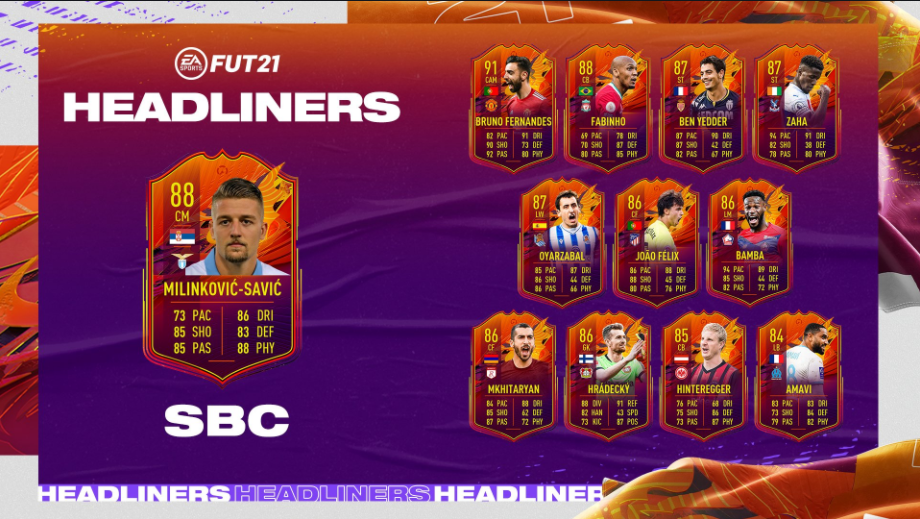 EA Sports added an 88-rated Headliners version of Sergej Milinković-Savić from Lazio to FIFA 21 on Sunday, Jan. 3. This item is available through the squad-building challenge (SBC) menu in FIFA 21 Ultimate Team.

The Headliners promotion will release upgraded players based on individual and team performances throughout the 2020-21 season with the possibility of additional upgrades for those who stand out. “Each time a Headliner gets a performance-based In-Form, their Headliner item will also receive an In-Form upgrade,” EA Sports said.

This is Milinković-Savić’s third special card in FIFA 21 Ultimate Team. EA has slightly boosted all of his stats, including Shooting (+6), Passing (+4), Defending (+4), Pace (+16), Physical (+3), and Dribbling (+3) when you compare this new card to Milinkovic-Savic’s 85-rated gold version.

This card is great because it’s fairly well-rounded and has four-star skill moves and weak foot. Headliners Milinković-Savić should also be great for corners and free kicks because he’s tall and has great Jumping and Heading stats. He’ll even provide a soft link to Cristiano Ronaldo, who’s one of the best strikers in FIFA 21 Ultimate Team.

Headliners Milinković-Savić costs around 163,650 FUT coins on PlayStation 4, 162,300 on Xbox One, and 176,500 on PC. It’s not an overpriced card considering its high skill ratings, even though this card lacks meta-gaming skills like Pace, Agility, and Balance.

Here’s the cheapest solution to complete the Headliners Milinković-SavićSBC right now, according to FUTBIN, a website that specializes in FIFA content. You have until Jan. 10 to get this card.