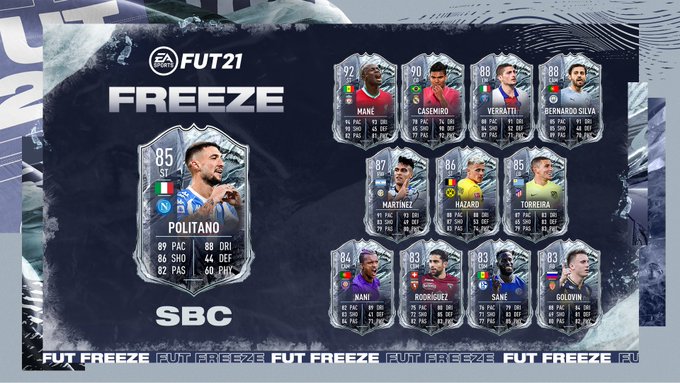 EA Sports added an 85-rated FUT Freeze version of Matteo Politano from Napoli to FIFA 21 today. This item is available through the squad-building challenge (SBC) menu in FIFA 21 Ultimate Team.

This is Politano’s first special card in FIFA 21 Ultimate Team. EA has also changed his position from right mid to striker. EA upgraded some of his stats, including Shooting (+9), Pace (+5), Physical (+5), Dribbling (+4), and Passing (+4), when you compare this card to his 81-rated gold version. You’ll have until Dec. 23 to get this card.

FUT Freeze Politano costs around 139,400 FUT coins on PlayStation 4 and has a higher price on Xbox One (147,300) and PC (157,700). EA focused on giving Politano more Shooting and Pace, which will enhance his attacking skills. FUT Freeze Politano also has 93 Agility and 91 Balance, so he’ll be one of the fastest players in the game, especially if you apply the hunter chemistry style to maximize his Pace.

Although there aren’t too many quality options in the Serie A right now, you can still link FUT Freeze Politano with some interesting players, such as Rulebreakers Dries Mertens 87-rated from Napoli, the Inform 86-rated version of Hirving Lozano from Napoli, and any version of Cristiano Ronaldo from Piemonte Calcio since he’s one of the best strikers in FIFA 21 Ultimate Team.

Here’s the cheapest solution to complete the FUT Freeze Politano SBC right now, according to FUTBIN, a website that specializes in FIFA content: